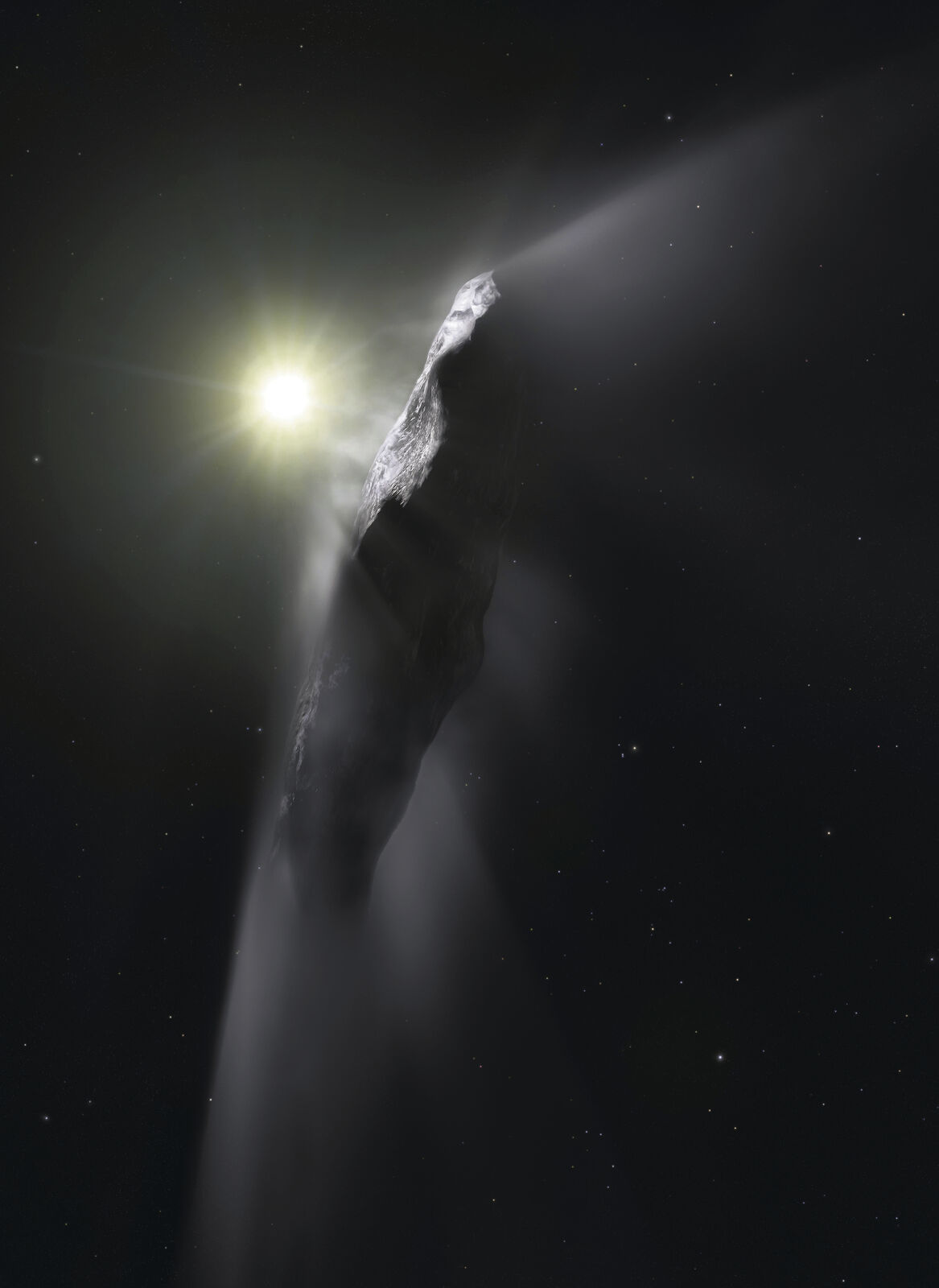 The journey from one star to another through an arid expanse of space – this is what many visionaries dream about in space travel. But two objects made it – completely without our participation: comets 1I / Oumuamua and Borisov.

It came to a surprise to astronomers in Hawaii when, when calculating the orbit of the celestial body discovered on October 19, 2017, they discovered that it came from interstellar space. All comets known to date are members of the solar system and come from the Oort Cloud, which is suspected to be located on the system’s outer edge, or the closest Kuiper Belt. On the other hand, the object named Oumuamua (Hawaiian = Leader) turned out to be the first object in a new class, which is why it was also preceded by “1I”, the number 1 of an interstellar comet. Unfortunately, Oumuamua was only discovered when it was already far from Earth and began disappearing into the depths of space. Strong fluctuations in brightness led to the conclusion that it was an unusually elongated, cigar-shaped object with a diameter of about 200 meters. The orbital motion also behaved slightly differently than would be expected under the exclusive forces of gravity. This was explained by the release of gases from volatile components, as they are known from comets near the sun. However, Harvard astronomer Abraham Loeb and his colleague Shmuel Biali expressed the assumption in a publication in 2018 that the abandoned part of a spacecraft could also be extraterrestrial using solar sail technology. However, most researchers see 1I / Oumuamua as a natural object from a distant solar system that was ejected from there and has now come to our cosmic ocean. Since 1I / Oumuamua is out of sight, many questions remain unanswered.

But what a stroke of luck. On August 30, 2019, amateur astronomer Gennady Borisov discovered another object from interstellar space in Crimea, Comet 2I / Borisov, which is now named after him. Several groups of researchers immediately pointed large telescopes at the intruder. For example, a team led by Stefano Bagnolo of the Armagh Observatory (Northern Ireland) conducted instrumentation polarimetry studies on the European Southern Observatory (ESO) Very Large Telescope in Chile. This showed a great resemblance to comet Hale-Bopp from our solar system, which was observed with the naked eye for a long time from the summer of 1996.

At that time, it was determined that Hale-Bopp had passed near the sun at most once in its existence. The solar wind and other microscopic particles pollute the surface in such passages, but unlike other comets, Hale-Bopp hardly found anything. 2 Anna / Borissov has now turned into a more pure picture of Hale Bob. This may just mean that Borissov had already left his original solar system before he approached the central star there. “The environment from which 2I / Borisov arose is not different in composition from the environment in the early Solar System,” says co-author Alberto Cellino of the Institute for Astrophysics in Turin. Thus the comet proves to be a kind of frozen time capsule from a distant world with signatures of the conditions prevailing there.

Another research group led by ESO employee Bin Yang has dealt with the dust cover (coma) that has formed around the comet’s core and the results are now published in Nature Astronomy. The team found “pebbles” small, one millimeter or more in diameter, in the coma. Since comets develop in the so-called elemental planetary gas and dust disk during the formation of a planetary system, one can infer from this that the smallest dust particles were originally compressed by collisions. Carbon monoxide and water were also found in the 2I / Borisov coma. However, the mixing ratio changed before and after the comet’s passage through its closest orbital point to the sun. This indicates that the comet’s nucleus has a heterogeneous structure and that the components come from different regions of the initial planetary disk that it flew through. So the system from which the comet originated has a similar nature to our Solar System in its early stage with strong radial mixing of all its components. The two different studies came to a similar conclusion. However, they cannot say anything about the exact origin of two objects. Now one longingly hopes to discover more interstellar ambassadors.