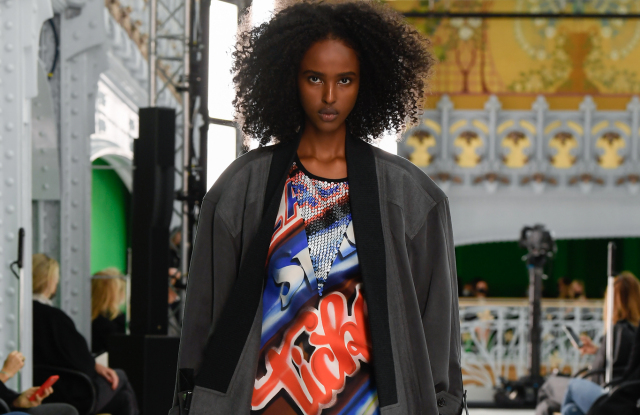 Nicolas Ghesquiere is a big fan of the “struggle of time,” and it can often be difficult to get your finger on historical references that the designer absorbs, breaks, camouflages, and / or rearranges in Louis Vuitton costumes. That’s what made his Fall 2020 show, “If the Past Can See Us,” and shown in front of a panel of 200 characters in costumes spanning five centuries, was both bewildering and delightful.

There was a strong figure from the 1980s in many of the looks in his Spring 2021 collection that transcended green screen walls and “virtual VIPs” – remote-controlled cameras mounted on slender columns interspersed with live guests in 19th-century Thonet chairs. For example, Boxy T-shirt dresses with candy-type prints from a dime store, quirky puff sleeves or fabric swag in heavy satin, appeared as if cut from a period portrait. 1980 meets 1880?

The season has also seen Ghesquière enter into the fluidity of the sexes, adding another layer of sophistication to the show, which is staged amidst the splendor of Art Nouveau at La Samaritaine, the carefully restored historic store in Paris set to reopen sometime next year. . The designer asked questions himself in the display notes: “What does underwear look like? What kind of cut can masculine and feminine blend in? In what wardrobe would it look good?”

He didn’t give all the answers – and he didn’t always look good in baggy pants with the crotch falling to the knee, or a bat-wool sweater in a gray knit fabric. But then you can feel in style with a simple sailor T-shirt with cap sleeves and baggy pants with sparkling embroideries or black leather pants with a sexy white tank and an indifferent soft coat.

This has been a mixed fashion season, with many designers playing it gracefully with nature or escape themes, or a minor brand refresh. Ghesquière is among the few who have dislocated their necks, opening his show with a model of feathered hair walking in a loose-fitting cream jacket with the word “vote” and dressed in men’s pleated pants. It looked fierce, but it was also as familiar as an old yearbook picture.

Ghesquière definitely hasn’t wavered far from lavish silhouettes: wide-shouldered coats, square puffed jackets and oversized trousers with character – here in a mixture of navy stripes, there is in a striped print that looks like it’s stained with mercury.

There weren’t many bags on the runway, but it stood out: a crocodile box bag in melted caramel and a heavy gold chain, and a new soft bag with accordion folds stamped with LV but in the same blinding green leather as the walls. Like the show that was broadcast live with all its tech jazzmatics, it was physically meet the digital – and it carried it well.