In the United States they have started demolishing statues again 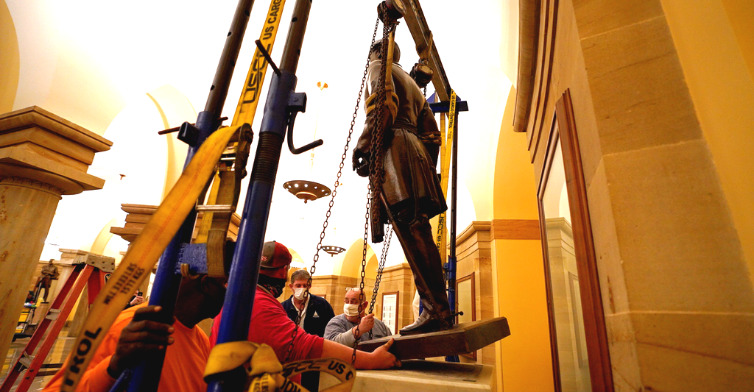 If a fan of US history asks, but perhaps not only, what are the first three things he connects with the US state of Virginia, then there is no doubt about the answer: George Washington, Thomas Jefferson e Robert Edward Lee.

It is no coincidence that the first two Presidents, the first and third in a row of the United States of America, are depicted on the famous Mount Rushmore and are celebrated in various ways across the country, while the third is the beloved (at least in the southern states) the leader of the Confederation, and perhaps the most famous General in modern history, after Napoleon. In fact, until yesterday, his statue, along with the statue of the great Founding Father, represented Virginia in the National Statues Hall in the Washington Capitol, a room in which there are two statues of two important figures for each state of the Union. Until yesterday. Yes, because at the will of Virginia Governor, Democrat Ralph Northam, the memorial honors General Lee, who has been in that location since 1909, It was removed. Controversial and divisive according to neoliberal ideology. “You cannot celebrate whoever fought in defense of slavery,” Northam said.

But that’s not all: guess who will take over as commander of the Northern Virginia Army on Capital Hill? Very famous Barbara Rose Jones. from you? And from a non-activist African American, born in New York by the way, he fought Against apartheid In public schools in Virginia, where he lived with his family. To the delight of the American far left, the Black Lives Matter movement and feminist groups because Johns will be the first person of African American descent and one of the few women to enter the statue room. Now, with all due respect to the person and for what he has done to combat a reprehensible phenomenon such as racism, it is our duty to say that this choice has all the atmosphere of influence, and it is certainly effective, and if we are allowed to confirm it, even vaguely pathetic.

History does not lie

Without delving into the merits of the American Civil War and the primary reasons for fighting it, one cannot even compare what General Lee represents about Virginia and the entire Old South, not only with John’s personality but also. Any other Virginian than the two above-mentioned presidents. Not only was the commander in chief of the Southern Army a historical figure, but he became a legend and archetype of valor, honor, military genius, mercy and religiosity. The positive values ​​recognized by the victors of the war, first and foremost the Northern General and then President Ulysses S. Grant, who is paradoxically less famous than his opponent. Just to say Lee’s colossal greatness, even winner in defeat.

I’ll be told that here We are not talking about history but rather symbols. For what this character represents in relation to moral truth and a multi-ethnic society. But how can history be excluded from thinking? Is it right to judge him by today’s moral laws? History, which does not lie unlike men and politics, tells us that Lee was someone who was against the crushing of the Union, and anti-slavery although he had owned slaves for some time as was the custom in many American states, including the Nordic countries. His only “mistake” was that he had faithfully fought in defense of his home country, Virginia. Who, with his extraordinary capabilities, despite the great shortage of available resources, made Washington’s buildings shiver, and is now denied.

There is a lot to be said about the Civil War and General Lee. But the controversy over Confederate statues has now settled in the United States for a few years, and frankly I think it’s pointless to keep talking about history when, on the other hand, it’s just politics. Like it or not, statues of Lee and the great leaders of the South will be removed from public spaces across America and imprisoned in museums. Just as all historical references for that period will be gradually removed or revisited, from state flags to cinema: Indeed today, if you want to watch “Gone With the Wind” on American entertainment platforms, it is recommended that you read on Blm’s website Just to say how far liberal indoctrination goes. The war between states, in fact, is part of an uncomfortable past that we want to get rid of mainly for the sake of electoral issues, on both sides, in order to preserve social peace and build the United States of tomorrow. This process is now irreversible.

Lee and the speech at the Richmond Capitol

That is why perhaps the only thing worth doing is to take these opportunities to honor the memory of the great general. And I chose to do so by reporting, among many other things, about the emotional speech he gave to me at the Richmond Capitol (where another statue of him was removed last July), marking his appointment as Commander of Virginia Troops:

President, gentlemen of the Assembly,

I was deeply moved by the reverence of the occasion, for which I must admit that I am not prepared for, as I accept the position that your prejudice has assigned me. I would have preferred that your choice be the responsibility of a more skilled man, but relying on Almighty God, a clear conscience, and the help of my fellow citizens, I dedicate myself to the service of my motherland, only in the name of whom I will draw my sword again! “