I look to the future through the viewfinder 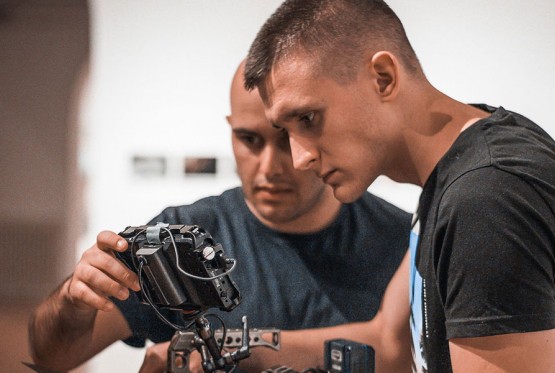 Banja Luka – Young Alexa Tarkulga, the young man from Banja Luka, has chosen his life career as a high school student with his immense talent and sharp eye for photography and camera, his gift has been recognized in numerous festivals and competitions across Europe.

His first short film, “Clicker”, was created as an idea in high school and was an unexpected hit at festivals in London and Sicily. As he says, his biggest support is his family, as well as the professors of the Academy of Arts at Banja Luka University, while he is a student.

“My interest in the world of camera and movies emerged somewhere during high school, when I made my first short film with my classmates. Until then, this film inspired me a lot to continue dealing with this branch of art,” Alexa Torkulga said.

He added that in the world of camera and cinema, it is possible to succeed in our country, but only if the person is ready for a lot of sacrifices and effort. He recorded his first pictures in elementary school, and when he met with praise and success, he decided to dedicate himself more and more to the job.

“I think it is possible for you to succeed, but it takes effort, work and a lot of time and dedication. This is a very promising profession, especially nowadays, as more and more films and series are being produced in our region. More attention is paid to how the production is, as well as From the viewership towards the products, and that makes me particularly happy. I look to the future through the viewfinder, “Trkulja explained to” Nezavisne “.

As he says, it was only after joining the Academy of Arts that he realized the true meaning of photography, and in his first year he made a documentary as part of the Konrad Adenauer Foundation.

“The first film I made in high school went well and was shown at festivals in Sicily and London. After that, I made a film about photographer Srjian Vogmelovi, which was shown at the Sarajevo Film Festival in Germany in Cottbus, and was also shortlisted for the“ Jean ”award. To the BiH Photographers Association, which I am especially proud of, “Turkulja explained.

He added that his main goal at the moment is to finish his studies at the Academy of Arts, and he has big plans for the future.

“When I talk about the near future, I am preparing a documentary that I have to send to certain festivals, but it all depends on this final product, and how it will finally meet, first of all my standards, then the standards of others,” Turkulja said.

He finds a role model in his field and, he says, is more attracted to the work of Milos Kodem, who filmed the popular local series “Killers of my father” and the movie “Dara iz Jasenovac.”

“I love Kodem’s style and way of working very much. In the future, I will definitely see myself in the world of movies, and we’ll see where, what and how. My biggest support is my mother Biljana and my father Radenko, also and as the rest of the family. They direct us to work better and master the subject, I am satisfied with college. I joined and I think all of this will shape me for the future. ”

READ  The Genshin Impact 1.3 can already be triggered, and there's a prima donna award for a new gacha flag