Historic Protests in Cuba – Joe Biden Addressed the Cuban Cause 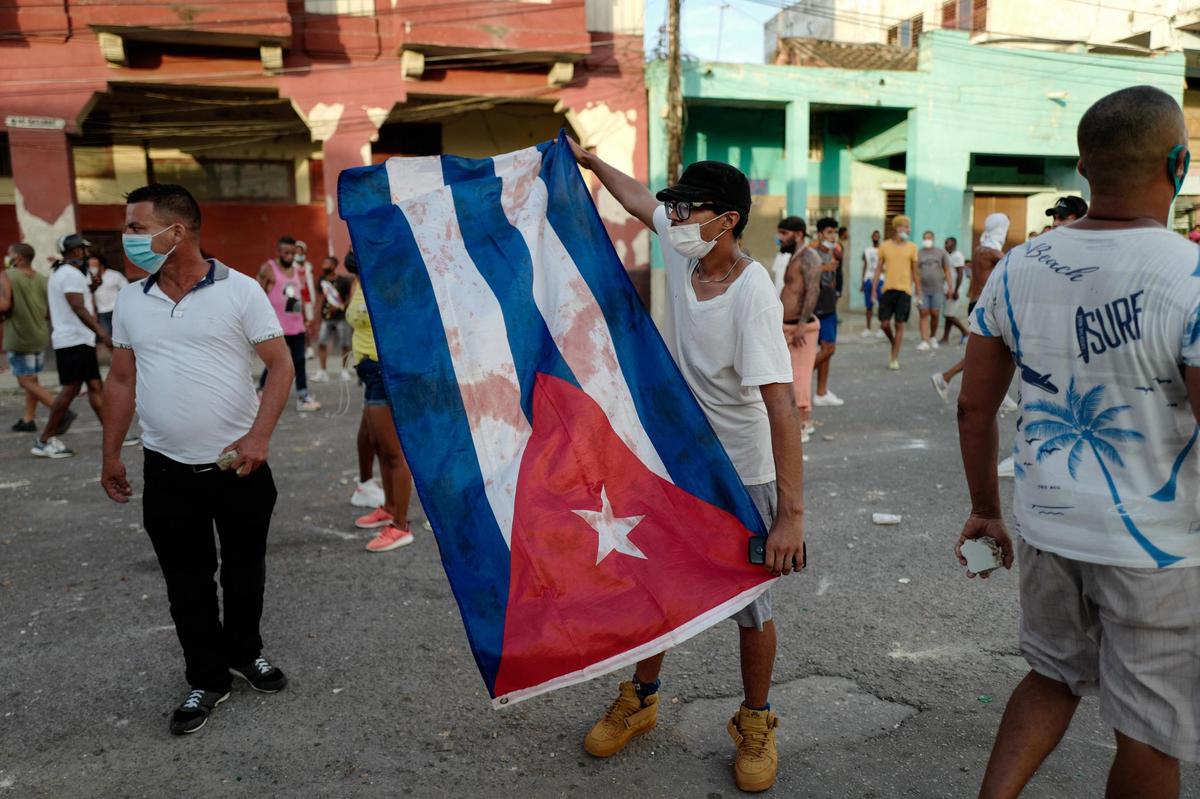 On Monday, the US President called on the “Cuban regime to listen to its people”, in the wake of unprecedented protests, which gathered thousands of citizens.

Historic protests in Cuba are forcing US President Joe Biden to seize a dossier that was “not a priority” but, according to experts, could remove the prospect of a rapid sanctions relief by the United States.

On Monday, Joe Biden called on the “Cuban regime to listen to its people” and its “vital call for freedom,” the day after unprecedented demonstrations involving thousands of people calling for an end to the “dictatorship.”

On the other hand, he did not say anything about US sanctions, although Cuban President Miguel Diaz-Canel, referring to the “economic suffocation”, blamed them for the ongoing “social unrest” on the island.

In an interview with some Cuban journalists, which was broadcast on television and radio, the communist leader stressed that his government is trying to “confront and bypass” the difficulties facing US sanctions, which have been strengthened since the term of US President Donald Trump (2017-2021).

“What are they looking for? To provoke social unrest, create misunderstandings” among Cubans, and also “famous regime change,” the Cuban president who appeared with a number of his ministers denounced for four hours.

US Secretary of State Anthony Blinken responded: “It would be a huge mistake on the part of the Cuban regime to interpret what is happening in dozens of cities across the island as the result of some actions taken by the United States.”

Since 1962, the United States has imposed a strict economic and financial embargo on the Castro regime. Democratic President Barack Obama, at the end of his term, had begun to normalize relations, and was soon swept away by his Republican successor, Donald Trump.

Upon arriving at the White House, Joe Biden, Vice President Barack Obama, ordered a reassessment of this policy.

But executive spokeswoman Jen Psaki admitted in March that the Cuban issue “is not at present one of President Biden’s priorities.”

Other topics, starting with migration flows from Central America, have attracted immediate attention from the new president, asserts Ryan Berg, a Latin American specialist at the Center for Strategic and International Studies.

He explains that the issue of immigration “was naturally taking precedence over a country that has been frozen over time for more than 60 years.” “It’s hard to move anything in Cuba and we’ve tried many things.”

“History will remember him”

For this expert, the demonstrations could force the democratic government to “finish its assessment, and at least prevent it from ignoring Cuba.”

“At the same time, it can be difficult to open up to a government that sends riot police to quell an apparently spontaneous protest,” he notes.

Since Sunday, Republicans, who support the hard line against the Castro regime, have called for a firm response to the crackdown on protesters.

Republican Senator Marco Rubio called the Democratic administration’s first reaction “scandalous”: a tweet from a diplomat blaming the protests for an increase in Covid-19 cases on the island.

“Joe Biden must oppose the communist regime, or history will remember him,” former President Trump added on Monday.

Its Secretary of State, Anthony Blinken, responded to blaming the United States for a “big mistake.”

During his campaign, Joe Biden raised the idea of ​​lifting restrictions on travel by American tourists to the island of Antilles, located 145 kilometers from Florida, and transfers of money between individuals.

His government has not yet acted and said nothing about including Cuba on the blacklist of countries supporting terrorism, decided at the last minute by the Trump administration, which is synonymous with severe sanctions.

The dossier is saddled with domestic political considerations: Cuban Americans, who are overwhelmingly opposed to Castro and staunchly opposed to any lifting of sanctions, represent a crucial electorate in key Florida, retained by Donald Trump in November 2020.

In addition, the Democrats have a slim majority in Congress, and the Chairman of the Senate Foreign Affairs Committee, Bob Menendez, is of Cuban origin and takes a more hardline stance than other Democrats toward the Castro regime.

In this context, John Kavulich, President of the US-Cuba Economic and Trade Council, believes that the protests will force Joe Biden to complete the assessment launched in January, but he does not believe that it is possible to return to the situation of 2016. …

For him, “every micron of US policy toward the Republic of Cuba is viewed by the Biden administration through a political microscope: getting the laws, appointments, budget, infrastructure plan, and other measures (in its legislative agenda) 2021, and then preparing for the 2022 and 2024 elections.”

Did you find an error?Report now.