Here Taitalora, the grandfather of all lizards 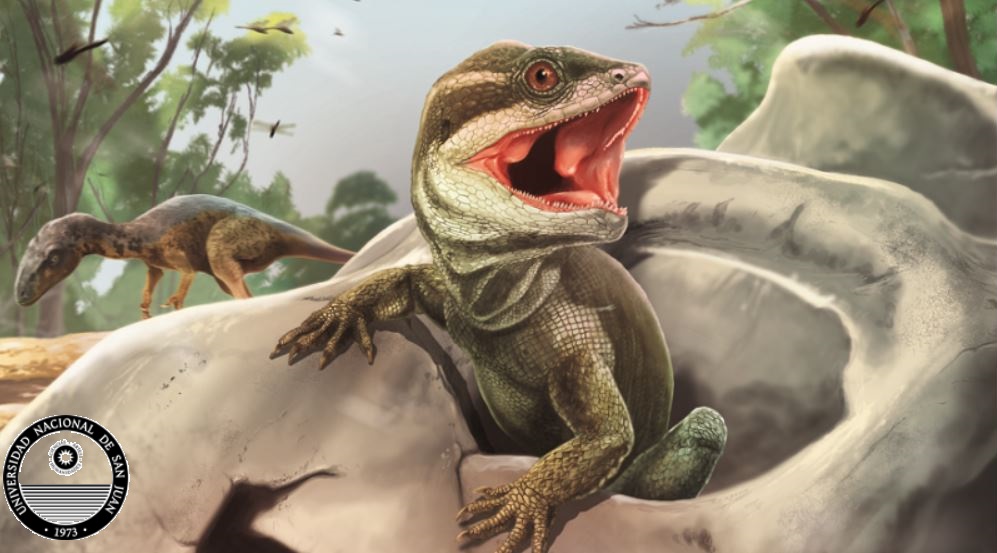 Discovered in Argentina: a tiny fossil that changes the evolutionary history of reptiles

Although the researchers were in the midst of a paleontology campaign and the fossil finds were not accidental, the small skull could have been confused with a stone by even the most experienced paleontologists, in fact, it was within deposits or formations, or It would have passed unnoticed, camouflaged as it was with dust from the site known as Cancha de Bocas, in the northern sector where the rocks of the Ichigualasto Formation appear. Instead, the scientists realized that in that piece there is a small fossil, no more than 2 centimeters long but of great importance in the history of evolution.

The discovery is described in studio “Triassic lepidosaur torso illuminates origin of lizard-like reptiles” pubblicato su temper nature by an international team of researchers led by Ricardo Martinez of the Instituto y Museo de Ciencias Naturales, Centro de Investigaciones de la Geósfera y la Biósfera of the National University of San Juan (UNSJ) and is the result of laborious, rigorous, precise and almost surgical work and studies by paleontologists in the UNSJ.
It is a small skull of reptiles, which may have a total length of about 15 cm, which is the ancestor of lizards, snakes and iguanas, which is now named, after 231 million years, Taitalura Alkoberi, Fragile but complete and three-dimensionally preserved fossil, “something unusual in a fossil of this kind, so small and fragile,” confirms Martinez who physically discovered it and who now describes it as “the first of its kind to be found in all of South America and like a lizard, it had Wide eye cavities, a skull extended backward like that of a chameleon, and the bones of its skull adorned with many small cavities.Their teeth are not in holes as in humans, nor on a slope as in many lizards, and are not glued together as in sphenodonts, but they are inserted into a long canal, in a unique way that we have never seen in other reptiles.”

Martinez adds that the anatomical features of Taitalura Alkoberi Show that “he An ancient representative of lepidosauromorphs, a group that includes current lepidosaurs (lizards, snakes and sphenodonts) that today includes about 10,000 species and that arose in the same period as dinosaurs, crocodiles, pterosaurs and mammals. Other early lepidosaurs have been found in rocks of the same age in Europe, but it is clear that Taitalura Not only does it seem ancestral to all, but it is the first to be found in southern Pangea, which indicates that the evolution of the group did not only take place in the north”,

The Argentine scientist further explains that “in ancient Pangea, about 230 million years ago, when all the continents formed a single mass where there are vast deserts, Ichigualasto was different, with an abundance of ferns, conifers, shiny ferns or ferns with seeds. In a world that still does not know flowers.” In this scenario, small animals like Taitalura C They moved quickly in search of insects.”

Ancient reptiles were given the scientific name of Taitalura Alkoberi which stems from titaAnd “Grandfather” in Quechua, e behind, lizard in the Kakan language, from diaguitas. That is, grandfather of lizards, while koberi Honor Oscar Cooper, current director of IMCN.

When the research team sifted Ischigualasto in 2001 in hopes of finding the fossils, among its members was a volunteer who was passionate about photography and didn’t stop taking pictures, and in one of the many photos Martínez took holding something that alerted his sixth sense of discovery. 20 years passed from 2001 to the publication of the discovery in temper nature It is due to various reasons, and the main one is related to the preparation of the fossil. Only then was it possible to start a study that led to a discovery that changes the history of vertebrate evolution.
Martinez recalls that “when we found the first skull… Taitalura Alkoberi Logically, we didn’t know what it was. We thought: Yes, maybe it’s a small lizard. Then, in 2013, we took him to the United States, to the University of Texas, where we did a “TC Scan” and then began studying it carefully last year.” Computed tomography is a special tomography of the fossils, thanks to which it is possible to obtain a three-dimensional view of the inside of the skull as well. This is how the researchers realized they had found a fossil that sheds light on the origin of reptile-like animals.

Martinez concludes with some Argentine national pride: “Not only do we have the most primitive dinosaurs known in the world, but now it turns out that we have the ancestors of today’s lizards and snakes. This ancestor lived with dinosaurs and his skull, which provides the most information, was intact.”