Gold, silver and bronze by Briegel from Schwäbisch Gmund »News and photos 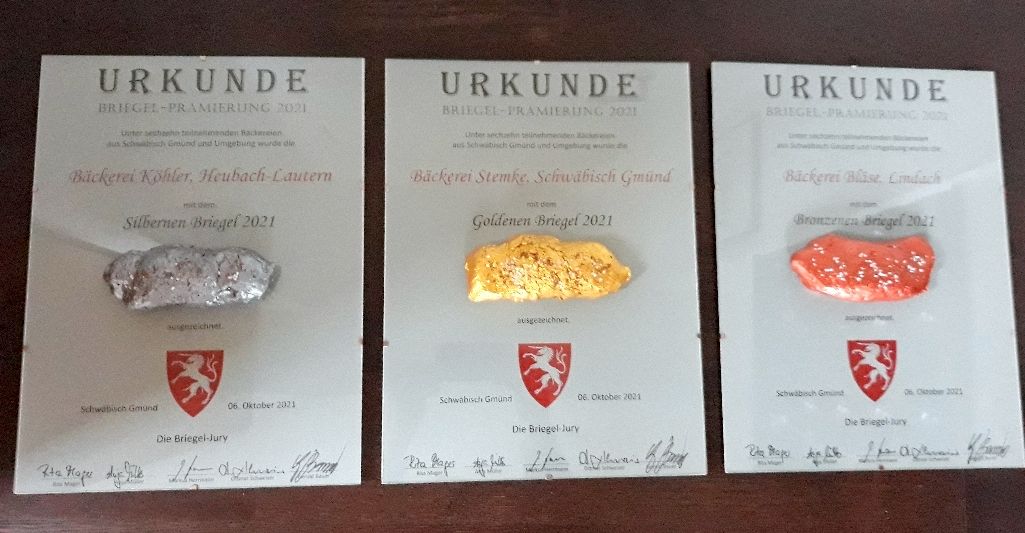 Gold, silver and bronze by Briegel from Schwäbisch Gmund

Former mayor Otmar Schweitzer of Moglingen, who launched the first Priegel Prize for bakeries in the Schwäbisch Gmund region, presented their certificates to the three winners of Gmund, Lutern and Lindach.

It was the first show that immediately became a complete success: the first Gmunder Briegel Award. For a long time, the former mayor of Mögglingen, Ottmar Schweizer, was up to the idea of ​​erecting a monument to the original Gmünder, thus making it clear to the residents that the bricks are not just a single, somewhat oddly shaped mass of dough baked with caraway seeds and salt is a local cultural asset. Cultural origin, according to legend, was invented by the monks of Gmundar in the Middle Ages or out of necessity.

The jury, in which Rems-Zeitung was also represented, tasted 16 Briegel from the group of ordinary bakeries that have a bakery in the Gmünd region and according to criteria such as appearance. Taste, crisp, bite etc. under the microscope and placed on the palate.

In the end, the product from Bäcker Stemke from Gmünd took first place. Second place went to bakery Köhler from Lautern and third place went to baker Blase from Lindach. However, other places’ ratings were sometimes too close to each other and only very few Briegel samples were rated as unsuccessful.

Interested in the full digital version?
Rems-Zeitung is also available online for direct purchase from iKiosk