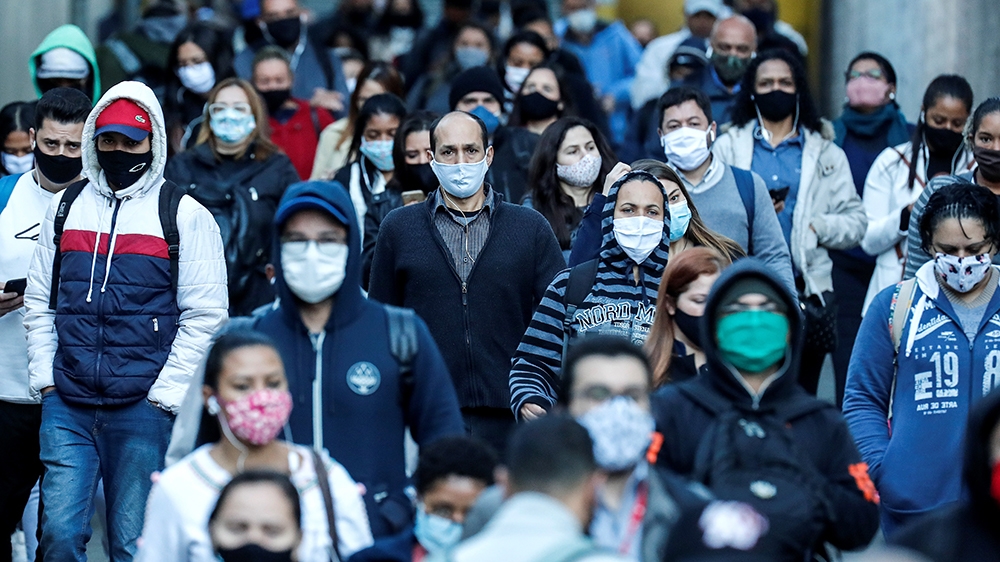 Authorities said 68 people had died of COVID-19 over the last 24 hours, raising the official death toll to 17,093

The government has said the real number of infected people is likely significantly higher than the confirmed cases.

Mainland China reported nine new confirmed cases of coronavirus on Saturday, all them imported, the National Health Commission said on Sunday, meaning there were no locally transmitted infections for a record 14th straight day.

The number of imported cases – found in people traveling into the country from overseas – was the same as a day earlier.

Three of these were recorded in Shanghai, with two in southeast China’s Fujian province, two in Sichuan in the country’s southwest and one each in the northern municipality of Tianjin and the southern province of Guangdong. The commission said another four asymptomatic carriers were found on Saturday, down from 10 a day earlier.

South Korea reported its 17th day of triple-digit rises in coronavirus infections, as restrictions on onsite dining at restaurants, pubs and bakeries in the densely populated Seoul area take effect.

There were 299 new infections as of Saturday midnight, the slowest daily rise in five days, bringing the national tally to 19,699 cases of the new coronavirus and 323 COVID-19 deaths, the Korea Centers for Disease Control and Prevention (KCDC) said.

On Friday, the country extended Phase 2 social distancing rules – the second strictest level – for at least another week and announced tougher rules on places with high risks of virus spread.

A medical staff takes test samples from a visitor at a coronavirus testing station in Seoul [File: AFP]

The number of confirmed coronavirus cases in Germany increased by 785 to 241,771, data from the Robert Koch Institute (RKI) for infectious diseases showed.

The reported death toll rose by six to 9,295, the tally showed.

Hello, this is Umut Uras in Doha taking over from my colleague Ted Regencia.

With a population of more than 1.3 billion people, India ranks third with the most number of infections, behind the US and Brazil.

The United States previously recorded 77,638 daily cases in one day, according to the AFP news agency.

New coronavirus cases in Australia’s state of Victoria returned to the triple digits on Sunday, according to the government.

Southeastern Victoria reported 114 new cases, a day after the daily tally fell to 94, its lowest in nearly two months. Its capital, Melbourne, is four weeks into a six-week hard lockdown that authorities have said may ease only gradually.

“At 100, 94, at 114, whatever the number, we simply could not open up,” state premier Daniel Andrews told a televised briefing on Sunday.

The nation of 25 million has suffered about 25,600 infections and just over 600 deaths since the start of the year.

The nation of 25 million has suffered about 25,600 infections and just over 600 deaths since the start of the year [James Ross/EPA]

Hong Kong pro-democracy activist Joshua Wong has joined the call for residents of the city to boycott the COVID-19 testing plan being rolled out by the government starting on Tuesday.

The latest development comes as Prime Minister Jacinda Ardern expressed anger over the botched communications regarding coronavirus testing in the country.

But she also thanked residents of Auckland for abiding by the new restrictions in the country.

French authorities have made it harder for Tour de France teams to reach the finish line in Paris if a member tests positive.

Oficials decided teams will be expelled from the race if two or more of their staff members test positive for the coronavirus within a week, according to AP news agency.

The move was announced just a few hours before the start of the three-week race’s opening stage in Nice.

It overruled a decision from cycling’s governing body that had eased the Tour’s exclusion rules on Friday. There are 30 members per team, which includes staff.

The number of daily new coronavirus cases in South Korea has fallen below 300 on Sunday – the first time in five days, as the government extends social distancing restrictions in greater Seoul, accoring to Yonhap news agency.

South Korea reported 299 new COVID-19 cases, including 283 local infections, raising the total caseload to 19,699, according to the Korea Centers for Disease Control and Prevention (KCDC).

Dr Thiravat Hemachudha, head of the Thai Red Cross Emerging Infectious Disease Health Science Centre, , said that the latest vaccine, is produced by integrating the virus’ DNA into tobacco leaves. The plant responds to the DNA and produces proteins about a week later, according to the Bangkok Post report.

The proteins are then extracted to make the vaccine. So far, it has been tested on mice and monkeys. The next step is testing it on humans.

“This vaccine, made with proteins from a special type of tobacco leaf, is easy and cheap to produce, even at an industrial scale. Also, there will be no patent-related problems with this approach,” he was quoted by Bangkok Post as saying.

Brazil is the second-hardest-hit country by COVID-19 after the United States, both in the fatalities and infections. The country, however, reported a slowdown in the number of new cases and deaths.

Italy has nearly doubled its daily tests this month amid a surge in new infections, mostly among young people returning from vacation.

For all the key developments from yesterday, August 29, go here.