From the single party to the big party 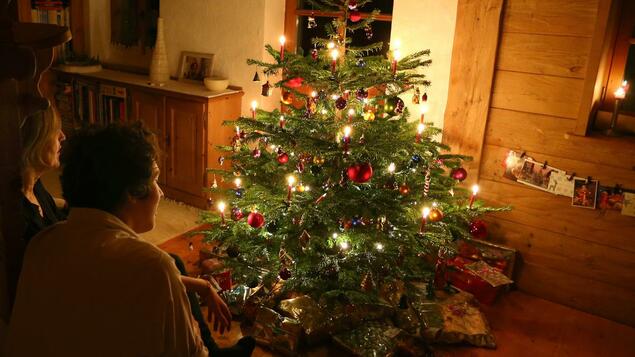 Germany on the way to lockdown for Christmas: Five adults from two families can still meet separately. But on Christmas Eve and on December 25 and 26, the rule was relaxed. Then the family can meet four more adults – provided that they are relatives of a “straight line”; So parents, grandparents and siblings. Then there is no fixed limit to the number of people.

This means that the festival is possible in Germany outside of the main family with the closest relatives. In principle, it is also permitted to go to church. However, it should stay 1.5 meters away and a mask should be worn. Singing is also prohibited and pre-registration is required. Most of the shops not necessary for daily necessities are closed on Wednesday. Under the Christmas tree there should be more than just nuts and mandarins, but far fewer last-minute gifts.

Is the Christmas lockdown in Germany relatively difficult or a bit soft? Depending on the pandemic situation, Christmas is celebrated differently in other European countries, with stricter rules on the one hand, but also a more lenient approach on the other. Overview.

In Finland, where Santa Claus is supposed to live in Lapland, real parties can still be celebrated – there are no restrictions on visits during the holidays. In theory, a Finnish sauna party is allowed, although not recommended at all. The state government, of which there are only 219 infected people in hospitals, recommends in a very general way that people celebrate the holidays only with a small group of close friends and relatives as possible. Since there are just over 100 per 100,000 inhabitants, it is advisable to use alternative online communication methods rather than to visit.

And of course, people should also pay attention to the rules of hygiene and distance. This also applies in the shops. Because Christmas shopping is still fully possible. “Our situation is alarming, but it is still good by European standards,” says the head of the Finnish Health Authority, Taneli Bumalainen.

Norwegians also celebrate the holiday season relatively leniently: between Christmas and New Year, they can invite up to ten guests to their home on two different occasions. “The distance rule applies throughout the party. From the moment you serve the spiced wine until you sit down at the table. When the gifts are opened. And when the coffee and Christmas cookies are served,” warns Prime Minister Erna Solberg. 50 people are allowed to meet in churches.

In Norway, where the number of cases has decreased again for two weeks, there is a mood, too. “Santa Claus comes from the Arctic … where no cases have been reported. So we have to assume he could come,” says Solberg.

In Switzerland, a maximum of ten people, including children, are also allowed to meet together for private celebrations, but if possible from only two families. Singing and wind instruments should be avoided during the festival. Nationwide, a maximum of 50 people are allowed to participate in one service, and there are space cards. The Swiss can no longer enjoy raclette or cheese fondue in restaurants; They will be closed from Tuesday.

Incidentally, skiing is still allowed in Switzerland with protection concepts and capacity restrictions for elevators in place. But given the number of cases, it seems doubtful whether that will change at Christmas: the number of infections in Switzerland – relative to the population – is among the highest in Europe, and the health system is reaching its limits in many places. Seen over a period of seven days, the incidence rate per 100,000 other inhabitants was over 300, and in Germany it was 211.

In Italy, ski resorts will remain closed during the Christmas and New Year holidays. In a European comparison, the country has been particularly affected by the Corona epidemic: so far, there have been more than 1.855 million infections and more than 65,000 deaths – more than any other country in Europe. The daily death toll is currently higher than it was in March, and the country is struggling against the onset of a third wave.

The country has now imposed a Christmas curfew between 10 PM and 5 AM. Bars and restaurants are closed, as are the shops. Travel between individual Italian regions is prohibited from December 21 to January 6, and in some parts of the country people are no longer permitted to leave their place of residence.

Just in time on Christmas Eve, the entire country becomes a four-day “red zone”: new lockdown – just like in spring. Accordingly, only urgent essential items such as food, medicine, or work-related trips are permitted from December 24-27. On Christmas, two people are allowed every day to visit relatives or friends in their municipality. Churches in the Catholic country also remain open. Prime Minister Giuseppe Conte’s general recommendation: No hugs, no kisses, please.

Christmas in the UK

But now the new virus variant VUI2020/01/12 has appeared. It is said to be 70 percent contagious. Now there is a strict lockdown with curfews in London and large parts of southeast England over the Christmas period. All non-essential stores and facilities such as hairdressers or movie theaters are closed. 16 million people are only allowed to leave their homes for work and with important exceptions such as visiting the doctor or grocery shopping. Those who live in the area with the highest level of Corona 4 are no longer allowed to leave this area.

READ  Blatter is under criminal investigation in Switzerland

In France, due to soaring Corona numbers at Christmas, there are general restrictions on going out between 8 PM and 6 AM – that’s really a relaxation. Restrictions stating that each trip outside the home is removed with good cause and certified in writing. Because Due to the strict measures, the number of infections has recently decreased sharply. And if the number of new infections shortly before Christmas is around 5,000, the French will be allowed to travel across the country again.

On Christmas, there is a maximum of 30 church service, but this is widely criticized. Additionally, six adults are permitted to meet regardless of the family relationship. But in order to protect grandmother and grandmother, Prime Minister Jean Castex recommends significantly restricting social contacts in the five days leading up to the holidays. But the French will have to do without the Christmas parade. Unless they walk their dog. Then walking is allowed.

You feel especially lonely the people of Belgium at Christmas. Prime Minister Alexandre de Crowe allows his countrymen to have contact with only one person who does not live in the same household. Only people who live alone can meet two more. For families, for example, this means: Either only the grandmother comes, or only the grandfather.