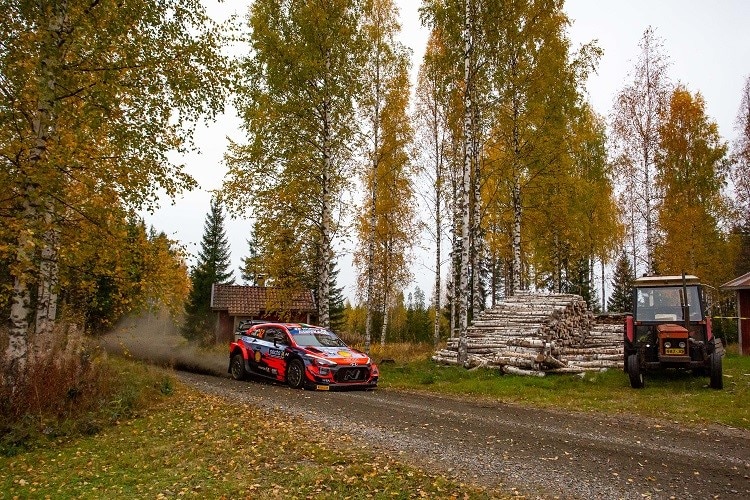 The first stage of the Finnish Gravel Grand Prix, round 10 of the World Rally Championship (WRC), goes to Hyundai with Craig Breen ahead of Ott Tänak.

The arch-rival Hyundai has poached the Toyota rally area. The Toyota team based in Jyväskylä, central Finland, which has won the local race since its return in 2017 to 2019, had to give up at least on day one. Hyundai, the defending champion in the Manufacturers’ Championship, did a great job this time in the 1000 lake grounds and put two i20 WRCs on top after six out of 19 tests. After a tough battle for positions at eye level, Craig Breen secured victory in the final stage of the Six Day Decisions in Falling Dark 2.8 seconds ahead of his longtime teammate Ott Tanak.

Brin celebrated his result: “It’s unbelievable. I’ve always asked what Finland would be like in the dark, and now we’ve felt and seen it. It’s so amazing. My lights weren’t 100 percent, to be honest, I still had to work a bit.”

Tanak, who finished second today, was satisfied with his result, despite losing the lead: “It’s surprisingly good. We never expected to get into a fight with Toyota, so it was surprisingly good. That was just the beginning, so we’ll see you tomorrow.” It’s a great day.”

Duel for the best Toyota

In the Best Toyota duel, Elfyn Evans battled in the Yaris WRC works and Esapekka Lappi in the Yaris WRC special to the end of the table. Portugal’s winner Evans eventually finished third (+6.1) by six tenths of a second over Lappi on his return in WRC. Surprisingly enough, Lappi won his home game at the Toyota plant in 2017.

Evans said, “I really enjoyed it, but it wasn’t easy. It’s hard to be so relaxed in the dark and in the later part of the test it was very hard to see what was on the side of the road.” Labe was relieved: “I’m very satisfied, it was a good day.”

Toyota’s young Kali Rovanpera, who temporarily finished third but eventually finished fifth with 7.9 seconds behind, would have loved it on his 21st birthday. “It was hard. It was already dark for us,” said the birthday boy and two-time winner of the season. “I didn’t want to risk everything. I tried to push but the time is not good.” Just 31.3 seconds later, Belgian winner Thierry Neuville followed him in his third Hyundai i20 WRC.

This time things didn’t go as well as they did before in Greece for seven-time champion and renewed title contender Sebastien Ogier, who as usual as commander-in-chief at Toyota Yaris WRC had to go on partly wet gravel roads. He finished his job as a street sweeper in seventh place (+33.6). “We had a tough day today. We did what we could, but it wasn’t enough to keep up with the pace up front,” was Ogier’s summary for the day, followed by his Toyota partner Takamoto Katsuta, who started the opener in Finland, by 13.3 seconds. She won the spectator’s short 2.31km course.