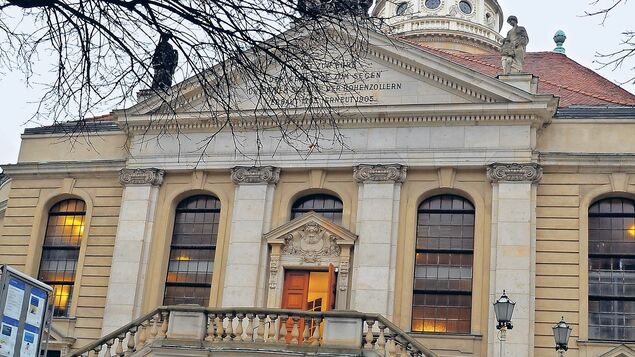 “We’re back!” Christoph Landry shouted. “We have arrived again In French Friedrichstadtkirche. “After a construction period of two good years, the French Church in Berlin, once founded as the Diocese of Huguenot, celebrated the reopening of the French Friedrichstadtkirch in Gendarmenmarkt on time at the beginning of the new church year, at First Advent.

And the Community Consistoire’s “Secretaire” was visibly pleased about the 100 or so visitors who attended the opening and listened to the organ music of church music director Killian Neuhaus. As a precaution, the community canceled the reception with champagne and appetizers as a precaution.

Archbishop Christian Stapelin said in his sermon that the church in the future should be “a space devoid of clear words and clear voice.” In fact, the Reformed House of God, its oldest previous building dating from 1705, is one of the ecclesiastical centers in Berlin. On the one hand, this is due to the three congregations that celebrate their services there Sunday after Sunday.

On the other hand, this is also due to the fact that the authorized representative of the Evangelical Church in Germany at the headquarters of the Federal Government, whose offices are located directly opposite the church, and the Evangelical Academy in Berlin hold their events. When German Protestants have something to say to official Berlin, they usually do so in the French Friedrichstadtkirch.

But all users in recent years have complained about some problems with the church which was only rebuilt in 1983 after being completely destroyed in 1944. Poorly accessible toilets were part of this as much as the modest access for wheelchair users. Thanks to renovations planned since 2010 and now completed for three million euros, there is now an elevator connecting the church hall to the rooms in the basement and access from the Gendarmenmarkt.

From the lower church of Friedrichstadtkirche there is a new entrance to the neighboring French cathedral, where the Huguenot Museum is located. In the words of the Chairman of the Board of Trustees, Joachim Mohs, the French Friedrichstadtkirch Foundation should continue to make a “presentation of public discourse” in which “the Church will make an ad hoc contribution.”