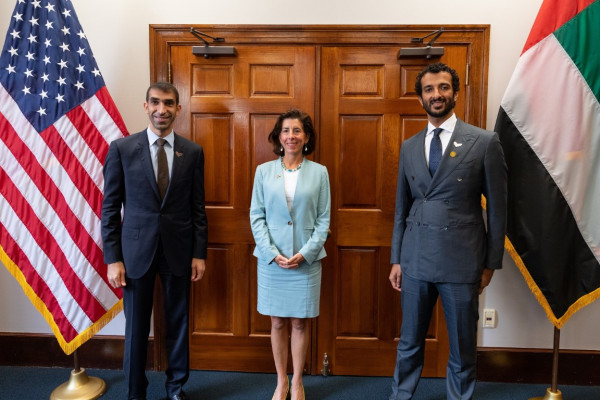 Abu Dhabi on September 23, 2021 / Abdullah bin Touq Al Marri, Minister of Economy and Dr. Thani bin Ahmed Al-Zeyoudi, Minister of State for Foreign Trade, met with Gina M. Raimondo, US Secretary of Commerce, in the presence of Mohammed Ali Al-Sharfa Al Hammadi, Head of the Department of Economic Development in Abu Dhabi, and a number of officials. Officials from both countries.

The meeting witnessed the signing of a memorandum of understanding between the UAE represented by the Ministry of Economy and the United States of America represented by the US Department of Commerce on enhancing cooperation in the digital economy and innovation sectors. and entrepreneurship. The memorandum aims to develop a strategic partnership between the two countries and enhance the UAE’s position as a preferred trade destination.

Under the memorandum, the two sides agreed to set up an integrated mechanism for coordination between the concerned authorities in the public and private sectors, to exchange skills and knowledge, intensify dialogue, transfer technology, and exchange best practices and policies in the targeted areas.

They also discussed ways to enhance cooperation between entrepreneurs and small and medium enterprises in the two countries.

See also  Basil Hoffmann, actor of many TV series, but also of Monicelli and Sorrentino has passed away