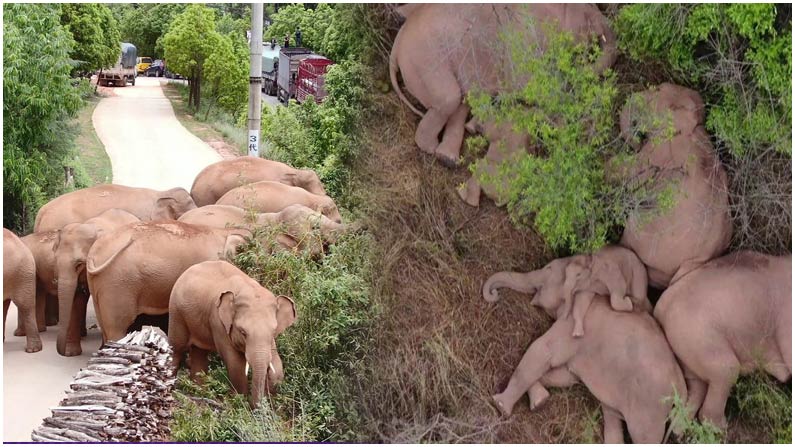 Human migration to satisfy hunger is coming to an end..not man..all living creatures do the same..go to where there is food and water..

Human migration to satisfy their hunger is coming to an end.. not humans.. all living creatures do the same.. they move to places where there is food and water.. groups move from one place to another.. unfortunately these elephants do not do that. You know where they got stuck but leave a new one and set off in search of a place.. The elephants, who had already traveled more than 500 kilometers, were crossing all the villages, towns and cities.. No one could understand why they were going or where they were going. Videos and photos of the elephant herd have already been circulating on social media. Internet users are also commenting on the videos and posting them widely, and the elephants are monitored by international media.

Usually, elephants cross the jungle in search of food and we have heard of elephant herds destroying crops in Chittoor and Srikulam. Kannam. The same thing happened but this herd of elephants left the jungle and took over the cities. It has been circulating among the public since one year ago. If there are 15 elephants in the group, including both small and large. It is not known at this time what he will do after leaving the position. They go too far, destroying the fields of crops encountered on the way. Rs crore is still lost because of them. But in other cities they cause traffic jams. The authorities are seizing the heads of those elephants and they do not know what to do.

The Chinese government has set up a special monitoring team to find out why they are doing this. It has a staff of 410. Their job is to watch over them. 14 drones are also being used to monitor their movements. Experts say they only travel for food. I suppose the saying is true. Nor should they stop where there is plenty of food! Some question why not play. Others say that the elephant, the leader of the herd, was forced to leave the wild due to lack of experience. The herd of elephants, which emerged from a reserve in Yuan County last year, is now near the city of Kunming. Pictures of them lying there relaxing are now circulating on social media.