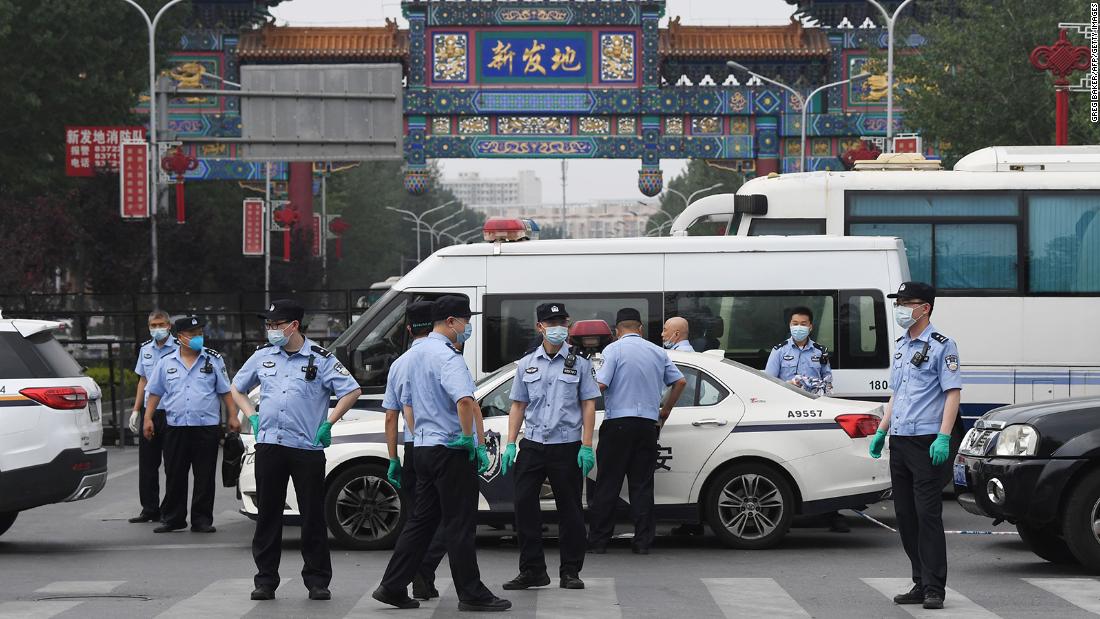 The Chinese capital reported 36 new Covid-19 cases on Monday, bringing the total to 79 since a locally transmitted infection was reported for the first time in nearly two months on June 12, the National Health Commission said.

The cases are linked to the Xinfadi market in the southwest of the city, which supplies most of the capital’s fresh fruits and vegetables. The market, which also sells meat and seafood, has been closed since Saturday.

The outflow has already spread to the provinces of Spain Liaoning and Hebei, where a total of five new cases of close patient contacts were found in Beijing.

The new cluster sent shockwaves across China, and Beijing city government spokesman Xu Hejian described it as an “extraordinary period” during a news conference on Sunday.

Chinese state media have repeatedly warned of China’s effective measures to combat the virus as the number of infections and deaths has risen abroad, comparing its success to the failure of Western governments, especially the United States.

The sudden resurgence of the virus in Beijing, previously considered the safest cities in the country, has raised the prospects for a second wave of infections and the possible reintroduction of a series of significant setbacks that previously stopped and stopped much of the country. Economy.

At a meeting of the State Council, the Chinese cabinet, late Sunday, Deputy Prime Minister Sun Chunlan said the risk of the latest spread of the epidemic was “very high”, citing the dense and high mobile population in the market, according to the state news agency. Xinhua.

Fengtai County, where Xinfadi Market is located, announced Saturday is the launch of a “war mechanism” and the establishment of a command center to combat the spread of the virus.
On social networks, the Global Times published a nationalist tabloid run by the Chinese government video paramilitary police officers bringing face masks patrolling the market after it closed on Saturday.

Authorities have imposed locks on 11 residential buildings near the market, strictly banning anyone from entering or leaving. Residents will have their temperatures checked daily and reported on their food and daily necessities.

Beijing has also conducted mass testing of nucleic acid for coronavirus, setting up 193 sampling booths in the city. More than 76,000 people were tested on Sunday, and 59 people tested positive, Xu told a news conference Monday.

Nucleic acid tests work by detecting the genetic code of the virus and may be more effective in detecting infection, especially in the early stages, than tests that examine the body’s immune response, although the latter are easier to perform.

Fengtai County collected samples from 8,950 people who worked in the Xinfadi market. More than 6,000 samples have been tested so far, and the results are negative, according to Xu.

Authorities also found and took samples from nearly 30,000 people who had been in the market 14 days before closing. All 12,000 tests conducted so far have shown negative results, Xu said.

The Beijing government has ordered everyone who visited the market and their close contacts to stay at home for two weeks for medical supervision. He also postponed the resumption of classes for elementary school students, which was originally scheduled for Monday.

Several local officials, including the deputy mayor of Fengtai district, were fired after the epidemic.

Outbreaks are not the first time the virus has returned. In May, several places in the country’s northeast were placed under strict locking after imported cases sparked clashes among local communities.

Prior to the new rally, however, Beijing recorded only 420 local infections and 9 deaths compared to more than 80,000 confirmed cases and 4,634 deaths nationwide, thanks to strict travel restrictions imposed at the start of the pandemic.

As in the rest of the country, life in Beijing began to return to normal, businesses and schools reopened, and crowds returned to shopping malls, restaurants and parks.

In a sign of the Chinese government’s confidence in controlling the outbreak, the country’s parliament even held its annual gathering in late May, after a two-month delay, allowing thousands of delegates to travel to Beijing from across the country and sit side by side. for meetings lasting 10 days.

The outbreak of the epidemic in Beijing will be the last test of China’s coronavirus prevention strategy.

Hu Xijin, editor-in-chief of the Global Times, He said on Twitter that Beijing will not become the second Wuhan, the original epicenter of the pandemic where the coronavirus was first discovered in December last year.
“There is no chance of Beijing becoming Wuhan 2.0. The world will see China’s strong capacity to control the epidemic, including strong government leadership, respect for science, public willingness to cooperate and national coordination of control measures. We will win again,” he wrote in post Monday.

Authorities in Beijing are still trying to find the source of the latest epidemic, promising to conduct “the strictest epidemiological investigations.”

Zhang Yuxi, president of the market, told state-run Beijing News on Friday that the virus was detected on a chopping board sold in the market by imported salmon, leading to fears of wider contamination. Several retail chains have removed salmon from their shelves, writes the Beijing Daily.

While investigations are still ongoing, a researcher from the Beijing Center for Disease Prevention and Control He said genome sequences showed that the virus found on the market was similar to strains normally found in Europe.
“But it’s still uncertain how the virus originated. It could have originated from contaminated seafood or meat, or transmitted by people who came to the market through their secretions,” said Yang Peng, a researcher. said state television CCTV on Sunday.
See also  67+ deals and steals so good to miss

CNN’s Steven Jiang and Shawn Deng contributed to the reporting.