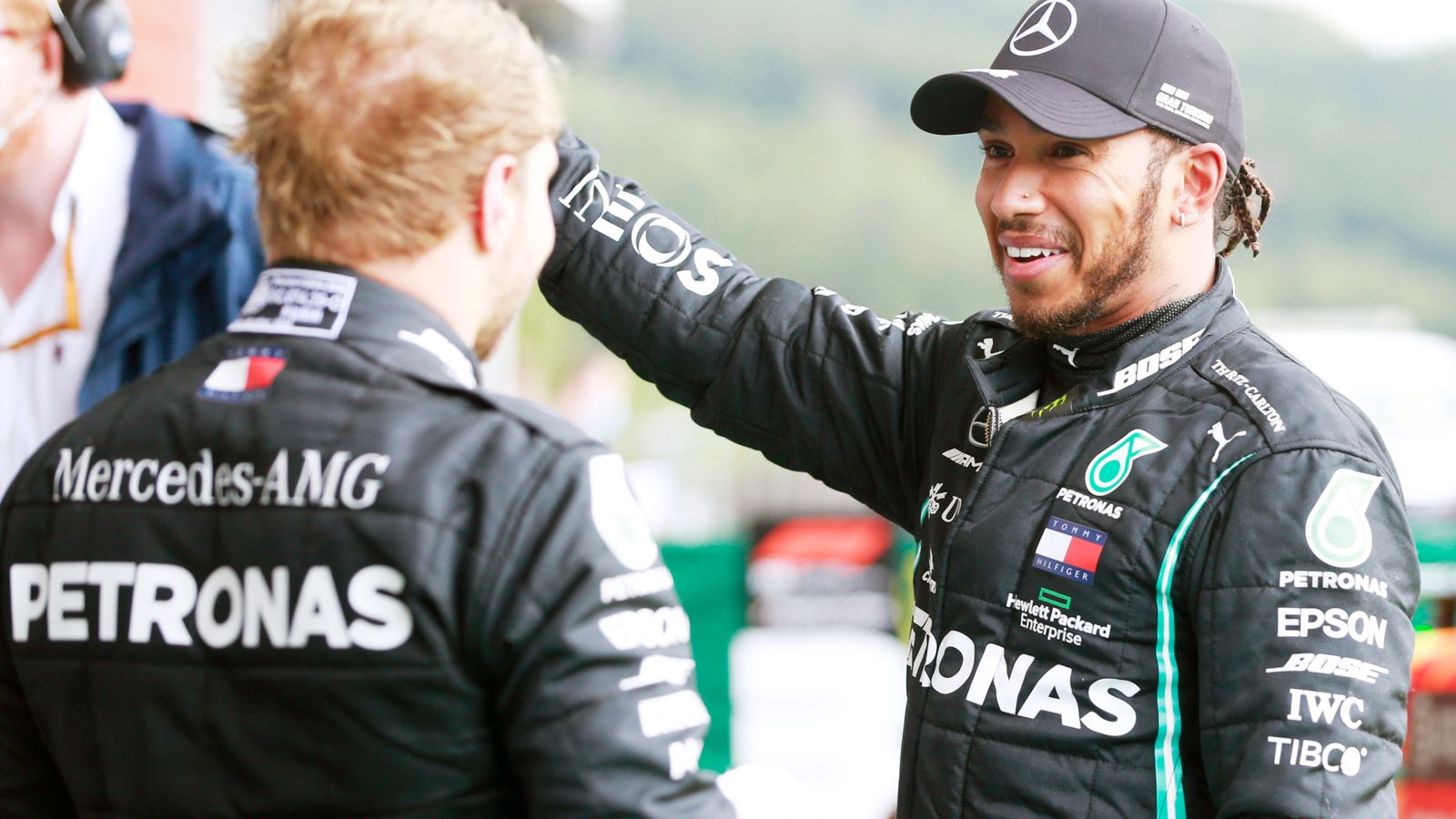 Lewis Hamilton ended Mercedes’ three-year wait for another victory at Spa-Francorchamps with a supreme drive to his 89th career win in the Belgian Grand Prix.

Hamilton led from start to finish to defeat team-mate Valtteri Bottas and Red Bull’s Max Verstappen to stretch his championship lead to a massive 47 points – nearly the equivalent of two race wins.

The six-time champion is now just two wins away from Michael Schumacher’s all-time victory record which could be equalled in two races’ time at the 1,000th anniversary race for Ferrari, the team who the German great set the landmark with.

But Ferrari have far bigger worries than losing a prestigious record right now.

The famous Scuderia had won the previous two Belgian GPs but there was not even the consolation of a point for them this time this time on a humbling weekend for F1’s fast-falling giants.

Sebastian Vettel was 13th and Charles Leclerc took 14th, with the team-mates even banging wheels as they fought for position out of the points.

But it was a big race – and big result – for Renault.

Daniel Ricciardo finished fourth, even taking the bonus point for the fastest lap with a fantastic charging effort on the 44th and final tour, with Esteban Ocon fifth after a last-lap pass on Red Bull’s Alex Albon.

Although outpaced by Renault, Lando Norris took a fine seventh in what proved the sole McLaren in the race after Carlos Sainz was ruled out before the start with an exhaust problem on his McLaren.

The leading runners were forced to manage their tyres to the end after the sole pit stops were triggered earlier than planned following a big crash involving Alfa Romeo’s Antonio Giovinazzi and Williams’ George Russell.

Giovinazzi slammed into the outside barriers at the fast Fagnes corner and, with his car’s rear wheel working loose as he span back across the track, the luckless oncoming Russell was powerless to avoid it and it took his car out of the race too.

The timing of the Safety Car had initially looked to be inopportune for Pierre Gasly, who had made a storming start to the race – including a breathless pass on Sergio Perez into the mighty Eau Rouge – despite starting on the slower and more durable medium tyres.

The AlphaTauri, along with Perez, stayed out through the Safety Car and inevitably lost lots of ground when he eventually stopped for tyres after the pack closed up. But the in-form Frenchman surged well from there, passing both Racing Points late on to secure a fine eighth place.

Hamilton in a league of his own – again

“We’re running out of superlatives for him,” admitted Sky F1’s Karun Chandhok after the conclusion of the six-time champion’s latest tour de force for a fourth win around arguably the sport’s most legendary track.

Pole position has sometimes proved a poisoned chalice for drivers owing to the fact it makes them vulnerable from the tow down the long Kemmel Straight to Les Combes on lap one. However, Hamilton conclusively made the most of his starting advantage over Bottas and never really looked threatened on the uphill run to Les Combes.

In truth, he didn’t really look threatened all afternoon – despite a brief power drop out and then late-race tyre management concerns on the front runners’ one-stopper.

Nonetheless, after the earlier-than-ideal first stops, Hamilton admitted he did experience some late-race nerves on his hard tyres, several weeks on from the late puncture that nearly cost him victory at the British GP.

“It was a bit of a struggle. I was nervous we’d have another situation like Silverstone!” admitted Hamilton.

“It’s not necessarily what everyone always wants to see the Mercedes at the front but we just keep our heads down. It’s an incredible mentality to work around, and we’re continuing to learn about the car.”

READ  Coronavirus cases are growing faster than ever around the world