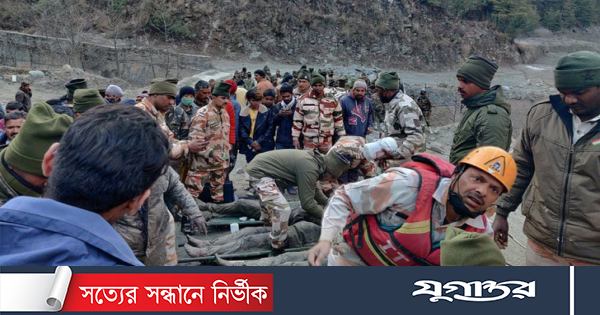 More than 160 people were lost after a glacier collapsed in the Shamuli district of Uttarakhand. 10 bodies have been recovered so far. It is feared that many more will die.

The bodies of 10 people had been recovered by Sunday noon. At least 150 people are still missing in the accident. BBC and Anatolia News.

President Ramnath Copind, Prime Minister Narendra Modi, senior state ministers and political leaders have expressed their concern over the disaster and expressed their deep sympathy to the families of the victims.

The situation was reviewed in a special meeting of the National Committee for Crisis Management, on Sunday evening.

The disaster occurred Sunday morning when the water level in Dauliganga rose sharply due to an avalanche near Goshimath. The dam cracked on Daliganga River. In addition to breaking many dams. Water levels rose in Daliganga River. The Rishi Ganga Hydro Power Plant was severely damaged.

The floods washed away many workers on the Taboban Hydropower Project. Management is afraid that none of them will survive.

Uttarakhand’s chief trustee, Om Prakash, said several of the stalled hydropower projects may have been washed away. The death toll may rise further.

Avalanches swept a large area in Uttarakhand, India. It is feared that more than a hundred people will die.

The avalanche occurred near the summit of Nanda Devi in ​​the Shamuli district of Uttarakhand at around 10:30 am on Sunday. A local hydroelectric project was also damaged.

Upon receiving the news, a 200-person rescue team from the Indo-Tibetan Border Guard Force arrived at the site and began the rescue operation. A red alert has already been issued on the road from Shamuli to Rishikesh.