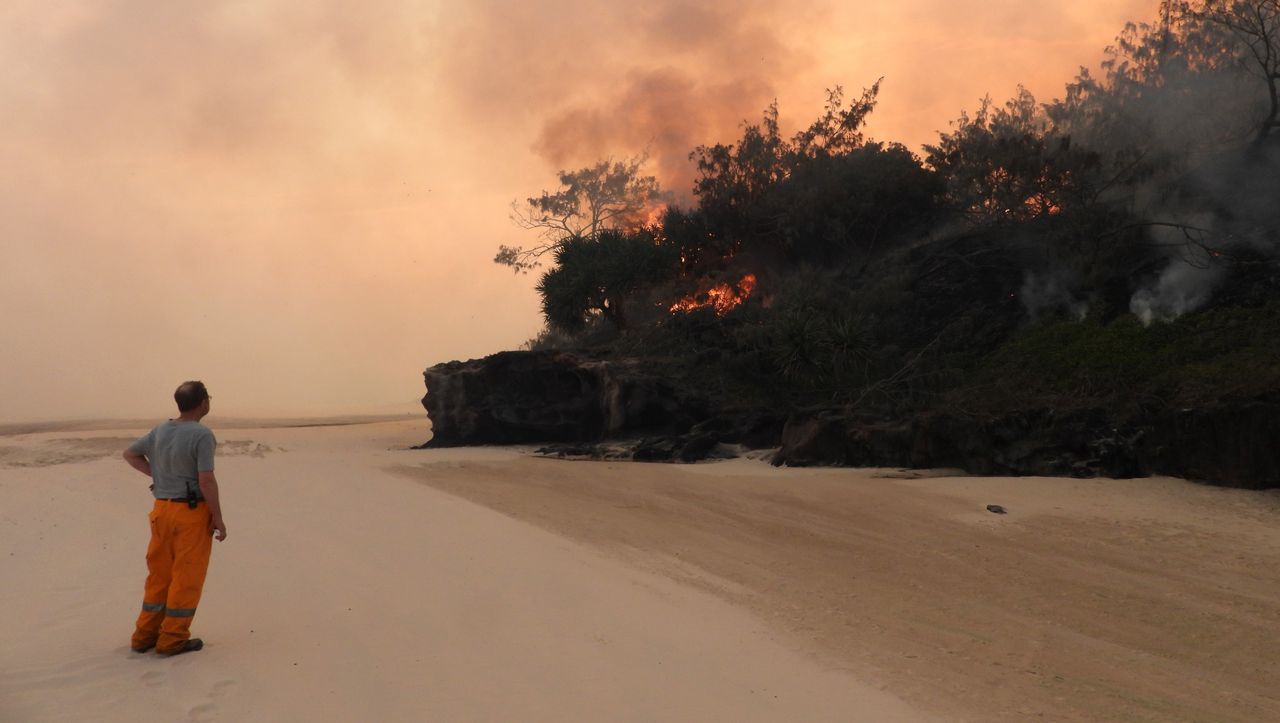 In Aboriginal parlance, Fraser Island is called “Cgary” – meaning something like “Heaven”. Indeed, nature on the largest sandy island in the world deserves this name. Beautiful beaches, dense tropical forests, mangrove swamps, and eucalyptus forests attract many tourists to the Queensland coast.

But there was a fire on Fraser Island weeks ago. Violent fires have devastated the 122-km-long island north of Brisbane since October. Flames from forests reach the beaches, and half of the World Heritage Site has already been destroyed. Vegetation is destroyed by square kilometers. The fire temporarily threatened Happy Valley, but firefighters managed to save the town’s homes. Firefighting planes sometimes drop more than a million liters of water every day. An illegal fire may have started the disaster.

The fact that the situation has improved now and the flames are under control is also due to the currently favorable weather conditions in the area. It rains and temperatures are around 25 degrees. A stroke of luck and a positive turn not seen for a long time. Because Australia is currently experiencing a violent heat wave. Rising temperatures and high winds set Fraser Island on fire, even if the continent’s interior land masses were mainly affected by the scorching heat.

Although summer in the southern hemisphere has only just begun, Australia has already seen temperatures reaching 48 degrees. The country witnessed the warmest spring since the measurements began, with average temperatures of 24.5 ° C. NASA recently reported that this is two degrees above the long-term average. The Australian Bureau of Meteorology (BOM) has declared November 2020 the warmest on record.

The map above shows how intense the heat wave is. It was created on the basis of satellite data from the US weather agency NOAA. This data flowed into the Goddard Earth Observing System (GEOS), through which NASA is simulating the global atmosphere.

It was unusually warm throughout November, but by the end of the month the heat increased again. The map shows the temperatures across Australia for November 30, 2020 at an altitude of two meters. In the darkest red regions the temperature was over 40 degrees. At least 20 ground stations in New South Wales, South Australia, Victoria and Queensland recorded their warmest day in November in three decades.

The temperature of Tharjumba Airport in Queensland reached 46 degrees, and the thermometer in the city of Andamoka, South Australia, rose to 48 degrees. In Smithville, the highest spring temperature ever recorded was in New South Wales on November 28, at 46.9 degrees. Sydney also saw several consecutive days in November with temperatures above 40 degrees – and the city has only managed this twice in 162 years.

according to The BOM attributed the heat wave to the movement of warm air from the center of the continent to southeast and eastern Australia. In central Australia, hot air has also risen to the upper layers of the atmosphere. Since the temperatures remained very high even at night, there was no cooling. This favors ever higher temperatures during the day.

The rainfall was about eight percent less than the average across the country. October was wetter than normal, due to the La Niña weather phenomenon. This is kind of the opposite effect of El Niño and it usually brings Australia cooler and wetter conditions. But in November, La Niña weakened and the temperature rose. The BOM, which releases weather forecasts for the entire country, fears that the La Niña effect may intensify again in summer.

READ  Asia: What the region reveals about the future of competition between the United States and China

Globally, too, November was warmer than usual, and satellite data from the Copernicus Earth Observing Program recorded the hottest temperatures in the world since the weather records began. It was especially warm in Siberia, in the Arctic Sea, and in parts of northern Europe, the USA, Latin America, and western Antarctica. Copernicus scholars emphasized that the record is in line with long-term trends and should be viewed in the context of global warming. Therefore, the urgent need for climate protection has not been lost.

What this could mean for Australia can already be seen in the last fire season from August 2019 to March 2020, when the continent experienced the most devastating fires in the country’s history. Fires are natural and are part of the ecosystem during fire season. But due to climate change, it is getting more severe. It destroyed more than twelve million hectares of land in six of Australia’s eight states and territories. They have destroyed much of the habitat of at least 70 local species.