An architectural gem dating back more than 3,200 years has been discovered in Peru 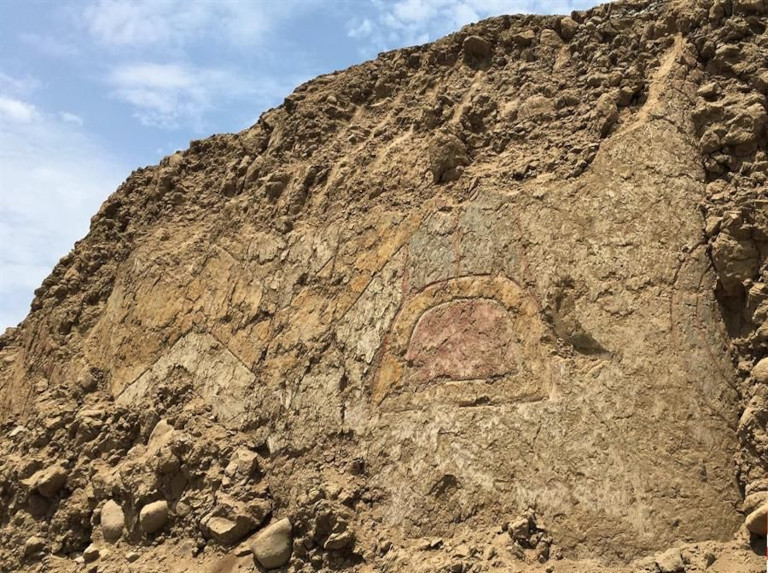 The discovery of a 3,200-year-old fresco, saved at the last moment from complete destruction in the middle of a farm field, once again highlights the astonishing development and complex view of the pre-Hispanic world on the northern coast of Peru.

This “very ancient architectural gem” was found almost by accident by archaeologist Regolo Franco, who alerted that an ancient hill is being destroyed in a crop-growing area in the Viru Valley, in the northern region of La Libertad. About 510 kilometers from Lima.

“I got a call on November 11 last year, from a friend who told me that they destroyed a Huaca (pre-Hispanic temple) inside a large hill, and that they left exposed some beautiful frescoes,” Franco told Efe about this great discovery.

When the friend warned him, he also sent him a photo of the place, which made Franco a “fan” as he found it to be of “great archaeological value”.

“I went to the site and could see that it is a small building, from the Cupisnique culture, which is 3,200 years old, and has frescoes,” he explained.

Originally, these paintings were not shown outside, but most likely were related to other architectural or ceremonial spaces of that millennial culture before the Spanish.

Unfortunately, it was destroyed by heavy machinery by the owner of the farm in which the hill is located or Huaca, to which it was named “Tomabalito”, because the site of “Castillo de Tomabal” in the Virú region is very close to the culture (200 BC – 500 AD) As noted by the researcher.

Franco, who accompanied in this department and the documentary work of archaeologist Ferienne Castillo, decided to prepare an emergency project for a first investigation of three months and, most likely, to find other murals towards the west side, which are still standing. It is covered with a large antique landfill.

Franco explained: “There are still more representations, obviously, inside the ceremonial case, which contain curved corners, which are characteristic of the formative period, even before the occupation of the Kubisniks.”

Experts specifically point out that the architecture with curved corners in Peru dates back about 5,000 years, as it was also found at important sites such as the Ventarrón Temple, in the Lambayeque Valley, by archaeologist Ignacio Alva.

Despite good intentions, this emergency intervention could not be carried out due to the epidemic and lack of funding, but surveys in the region made it possible to identify some Cuban architectural evidence.

“In its structure, in its construction and in its fillings, we have demonstrated the existence of handcrafted conical bricks … which are very typical of this culture, dating back roughly 1,000 or 1,200 years before Christ,” said Franco.

The archaeologist informed the decentralized Directorate of Culture in La Libertad that this “great discovery” had destroyed nearly 60% by heavy machinery, so it was decided to take legal action and see a project to protect the memorial.

Franco, an experienced archaeologist with decades of work on the northern coast of Peru, where he runs the famous El Brujo archaeological complex and the Cao Museum, verified through ancient aerial photographs that the archaeological hill was more extensive and that its destruction was the result of the advancing crop fields.

“Many of these hills were large and densely populated architectural complexes, which were unfortunately completely destroyed by machines over the centuries, with the aim of dedicating themselves to the cultivation of cotton, in principle, and now sugar cane,” he said.

Specifically, “Tomabalito” is not a secluded hill, but may have been associated with “a whole set of public ceremonial structures that were destroyed over time” and thus is directly connected to the nearby Carabamba River.

The unearthed frescoes, and those that are still very likely to be found, are “displayed eastwards, towards the sunrise” and show creatures similar to those of Cupisnique “discovered in other pillars in various places on the northern coast of Peru”.

These are “images of supernatural beings associated with fertility, fertility, water and rain”, which have always been “a vital component of all societies of all time”.

Franco noted that at the time of the occupation of Cupisnique, the Virú Valley was “densely populated, as it concerns not only this discovered temple, but also other important structures located on both banks of the Carabamba River, in places very important to the future investigation.”

Now, in the presence of the Ministry of Culture, they will seek to protect the frescoes to prevent further destruction or entry of vandals or “huaqueros” (looters), with the expectation that “in the very near future, the epidemic may lead to an end.” Specialized work can begin at the site.