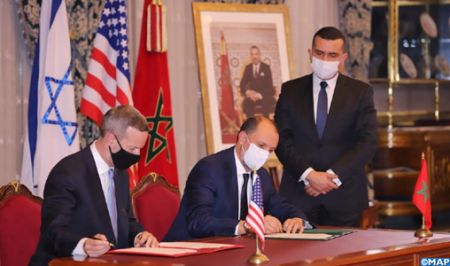 During the visit of the Israeli-American delegation to Rabat, the United States and the Kingdom of Morocco signed a memorandum of understanding between Morocco and the American Company for Development and Finance to encourage investments in Morocco and Africa. The first agreement, which is a memorandum of understanding between the government of the Kingdom of Morocco and the American Foundation for Financing for Development (DFC), was signed by Mohamed Benchaaboun, Minister of Economy, Finance and Administrative Reform, and Mr. Adam Bohler. , CEO of the American Foundation for International Development Financing. This memorandum of understanding provides for the provision of financial and technical support for private investment projects worth 3 billion dollars in Morocco and sub-Saharan Africa, in coordination with Moroccan partners. The second agreement signed by M. Mohsen Jazouli, Minister Delegate to the Minister of Foreign Affairs, African Cooperation, Moroccans Residing Abroad and Adam Buehler, is a letter of intent between the government of the Kingdom of Morocco and the government of the United States, represented by the US International Development Fund. Founded on the US “Prosper Africa” ​​initiative.

With this letter of intent, the Moroccan government expresses its support for the American “Prosper Africa” ​​initiative. A branch of this agency will be opened at the Embassy of the United States in Rabat to facilitate access for American investors and cooperation towards Africa.
So now the news, but we need to dig deeper. Indeed, as announced in the phone call between President Trump and His Majesty King Mohammed VI, the US consulate in the kingdom’s southern provinces will have a marked tendency to boost economic exchanges. This indicates two things: the first is that the advanced regionalization plan for the southern provinces of Morocco has created a region with strong economic attractiveness, which is an indication that well-directed autonomy is the bearer of prosperity, and the second is that Morocco also when it comes to internal issues does not miss the North Star that he referred to. Your Majesty or do good in Africa.