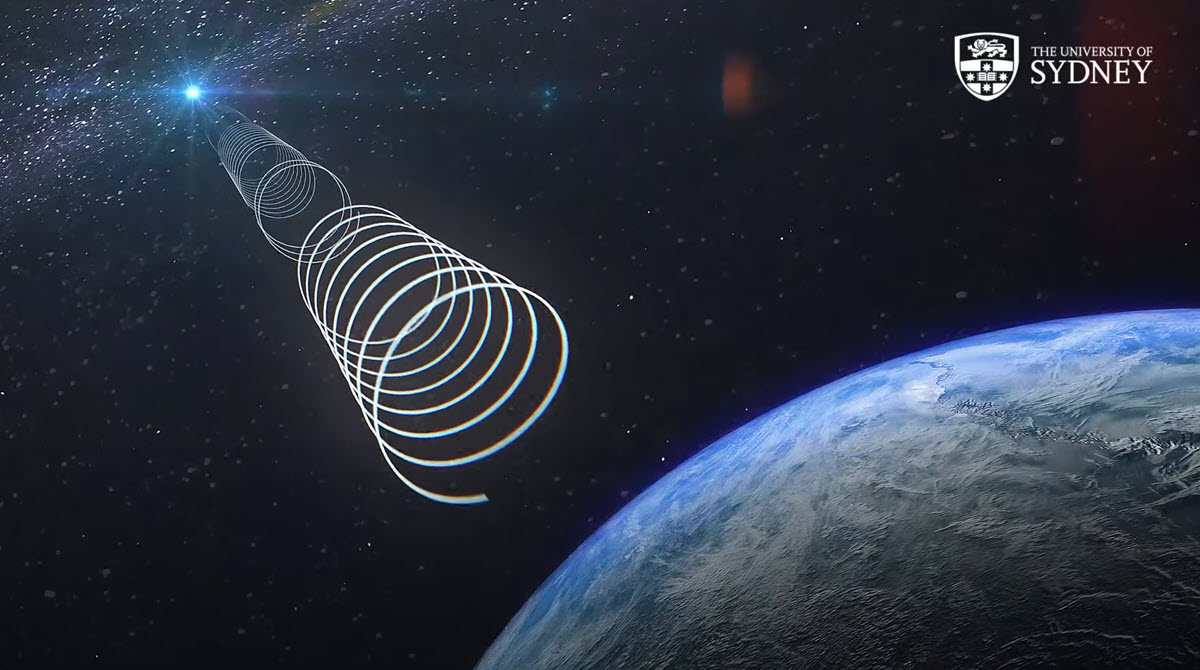 A highly sensitive radio telescope finds a signal source that emits radio waves for weeks and then disappears again within a very short time. Common explanations are excluded.

A previously undiscovered source of the radio signal not far from the galactic center baffles a team of astronomers led by Ziteng Wang of the University of Sydney, Australia. This phenomenon, christened ASKAP J173608.2-321635, cannot be assigned to any previously known cosmic body. Study director Wang believes it is possible to discover a new class of objects that can only be seen at all through radioimaging surveys.

The hypersensitive telescope is one mystery after another

ASKAP J173608.2-32163 was detected using the Australian Square Pathfinder (ASKAP) matrix. It is one of the most sensitive radio telescopes ever. The latest mystery that the telescope has brought to science is not the first, nor is it the only one of its kind that has not yet been resolved, nor is the phenomenon of strange radio circuits still waiting to be solved.

In the case of ASKAP J173608.2-32163, the researchers do not consider it improbable that the signal source eventually was a known type of cosmic object. But at least the definition of such an object should be expanded, according to astronomers in the journal Science Astrophysical Journal. Anyway, Wang could clearly say, “We’ve never seen anything like this.”

Signals are found only sporadically

Deciphering the phenomenon has become more difficult due to the fact that it cannot be found constantly. Between April 2019 and August 2020, the signal appeared 13 times in the ASKAP data. Follow-up observations in April and July 2020 using the Moriang Radio Telescope in Parks, Australia showed nothing. In contrast, the Meerkat radio telescope in South Africa received success in February 2021. The Australia Telescope Integrated Array (ATCA) detected something in April 2021.

Previously, neither the meerkat nor the ATCA found any data on this signal. The researchers also examined the X-ray and near-infrared observations as well as archives with radio data collected by several instruments. Without success – this signal did not appear anywhere.

Polarization refers to scattering and magnetization. This may be at least in part due to dust and magnetic fields in the interstellar medium between Earth and the source. However, it also appears that it is possible that the source itself is strongly magnetized.

A note on data protection

This is where you will usually find external content Youtube videoHowever, we were unable to obtain your consent settings.
Reload the page or adjust the consent settings manually.

Ultimately, astronomers can’t tell what they’re dealing with. But what they can say is what they don’t deal with. They were able to rule out X-ray binary stars, gamma-ray bursts and supernovae.

Other than that, there are several types of stars that are known to change radio wavelengths. These include stars that flash frequently, or nearby binary stars with an active chromosphere, and stars that obscure each other. However, all of these types should be visible in the X-ray and near-infrared regions, because glowing stars usually have an X-ray emission corresponding to radio emission, and the vast majority of stars have a near-infrared emission ratio that should be discoverable. According to the researchers, a pulsar might also be an option, but that also seems unlikely. Because pulsars send out radio beams at regular intervals. This is exactly what ASKAP J173608.2-32163 doesn’t do – at least not consistently.

Australian astronomers are just as ignorant. Because they were able to prove that the radio object has some characteristics in common with another type of mysterious signal that was discovered in developing countries known as the Central Galactic Transit Radio (GCRT). The catch: its origin is still unclear.

Astronomers now hope to discover another GCRT, ASKAP J173608.2-32163, which may make it easier to find similar sources. The researchers now want to increase the “screening rate”, that is, to search for such phenomena on a larger scale and in a more targeted manner. Only in this way will it be possible one day to name the nature of these observations.

See also  In the center of the district - the quarantine continues ... - Freising