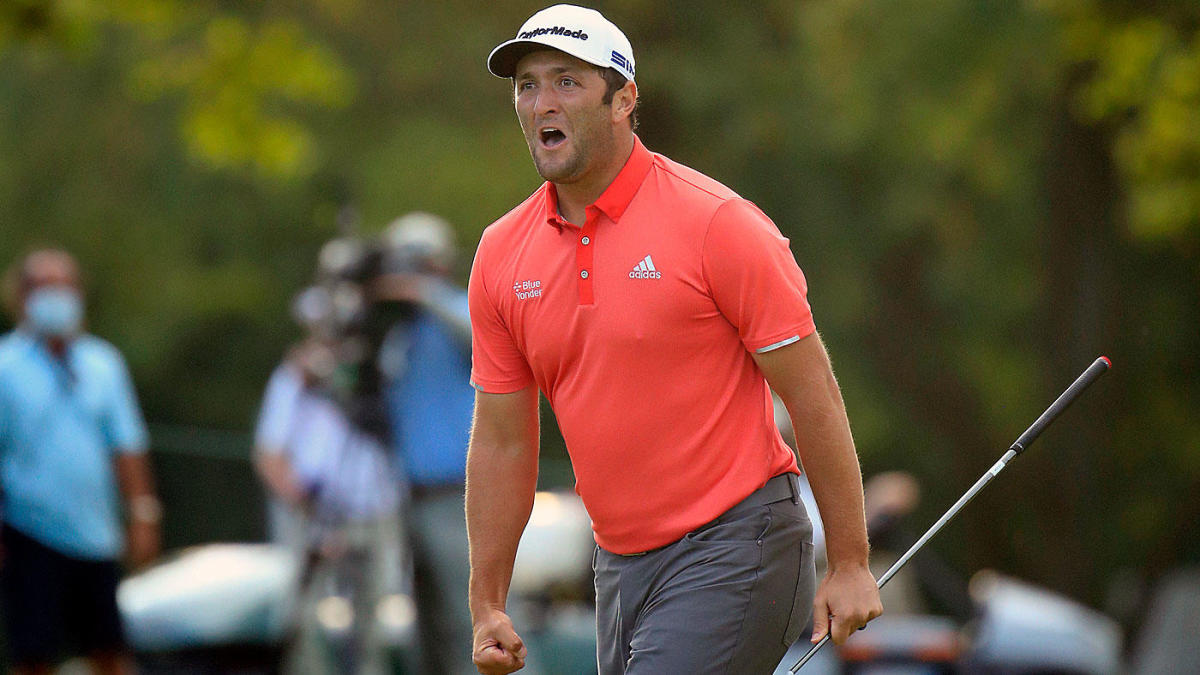 Jon Rahm has never won a major championship, but it probably feels like he’s won a couple after the season he’s had on the PGA Tour. Rahm took the 2020 BMW Championship at Olympia Fields on Sunday in a surreal playoff over Dustin Johnson by closing 66-64 on the weekend at one of the toughest courses of the year.

The last 30 minutes of the tournament were completely and totally insane. Rahm finished at 4 under, and it looked like D.J. was going to come up a stroke or two short. Instead, Johnson birdied the 15th and made the 3 of the year on No. 18 by sinking an impossible 43-foot putt over a ridge and down a hill. He even offered up a fist pump. That wasn’t even close to the best putt of the day, though.

Rahm poured in a 66-footer on top of him on the same hole about 20 minutes later to end the sudden death playoff between the two best players in the world before we even got to settle in and enjoy it. A 66-footer (his longest putt on the season) to win a playoff event and nearly $2 million! Sixty! Six! Feet!

Rahm also won at one of the other toughest courses of the year, the Memorial Tournament at Muirfield Village. He played the two events in 13 under combined. Nobody who played in both events (which was most of the best players in the world) got within seven of that score by Rahm. It’s a testament to his unbelievable ball-striking skill but also his ability to win on major-like courses that are firm, fast and test every aspect of a professional’s game.

“I think the two best setups this year have been the Memorial and here by far,” said Rory McIlroy early in the week. “They’ve been the two best setups of the entire year. You could maybe throw Harding Park in there, as well, but this is proper golf. This is you’ve really got to think about stuff, you’ve got to land it on your numbers, you’ve got to put it in play. Those five-, six-footers for pars to sort of keep the momentum going is huge. It’s nice to play a round of golf like that again.”

Rahm hit a lot of those 5- and 6-footers, especially on the weekend. His only bogey over the last 36 holes came on Saturday in Round 3 when he picked up his ball before marking it and was assessed a one-stroke penalty. Other than that, he had a clean card for the final two days, a near-impossibility on a course like Olympia Fields, which saw only five of 69 players finish under par.

There are few who can contend with Rahm’s all-around game. He finished top 15 in this field off the tee, with his approach shots, around the greens, and with his putter. Plenty of golfers can hit bombs like he does but so rarely can anyone combine that with the deft touch Rahm has from 100 yards and in. When it comes to that skill combined with everything else he does at the level he does it, maybe only Johnson — the man he defeated on Sunday — or Justin Thomas or Rory McIlroy can claim the same level of class.

Unfortunately for Rahm, he doesn’t actually get the credit of a major for this win or for the Memorial, even though both felt like they were being played at that level. He’ll have six runs at one of those over the next 11 months and a game that continues to travel to any course on the planet. It’s a necessity to take down D.J. in the out-of-body state he’s currently in.

Rahm did not prove anything we were not already aware of at Olympia Fields this weekend. He only confirmed with his performance at Muirfield Village (and several other venues globally) revealed. That though the “best player in golf” label keeps trading hands, Rahm will not be exiting the conversation at any point in the near future. Grade: A+

Here are the rest of our grades for the 2020 BMW Championship.

Dustin Johnson (2nd) — He’s averaging nearly four strokes gained per round (!) since the start of the PGA Championship after shooting 4-under 276, which was 11 strokes better than the field for the week. It’s not the biggest hole in his resume, but winning the FedEx Cup next week (where he’ll start 10 under) would be a nice addition to his already-hall-of-fame career. D.J. closed like a boss on Sunday, but Rahm made zero mistakes and what can you do about a 66-footer to win? The margins at the top are outrageously small. Grade: A

Joaquin Niemann (T4) — Get him at 100-1 to win the U.S. Open while you still can. Some of the trajectories he touches off the tee and with his irons are absolutely preposterous. When he went out in 31 on Sunday, it felt as if he was going to come in and swipe this thing from some of the biggest names in the world. If he had, he would have become the fourth-youngest to two PGA Tour wins in the last 30 years (Tiger Woods, Jordan Spieth and Sergio Garcia). Is that a good list? Grade: A+

Tony Finau (5th) — That back nine 30 to stay in the top 30 and scare the top of the leaderboard was absolutely filthy. It touched off a round-of-the-week 65 on Sunday. It’s incredible to me that Finau (seven top 10s) has not won this season while Tiger Woods (two top 10s) has a victory. On the week, Finau — somewhat incredibly — hit just 18-of-56 fairways but absolutely cleaned up around and on the greens. One of these days he’s going to trade these top-six finishes at events that really matter for a freight train runaway victory. Maybe. Grade: A

Billy Horschel (T33) — He slid in as the 30th player in the FedEx Cup standings by finishing with four straight pars. Might not sound like a big deal, but he’ll play for $15 million next week at East Lake (where he’s won!), and the difference in the FedEx Cup bonus between 31st and 30th (even if he finishes last next week) is $195,000. Grade: A

READ  Washington Redskins: FedEx is asking the team to change its name after pressure from more than 80 groups of investors

Tiger Woods (T51) — Big Cat never got under par this week at Olympia Fields as his 2019-20 PGA Tour season came to an inauspicious ending on Sunday early on the day with his fourth consecutive round over par. The stats say Tiger’s putting — and some of his lag-putting speeds would confirm this — but Tiger suggested after his round that he’s also not missing in the right spots, which contributes to his inability to hold a score. “I would say trying to clean up my rounds and trying to miss the golf ball in the correct spots [is what I need to work on for the U.S. Open],” said Tiger. “As I said, I haven’t done that.” Grade: C