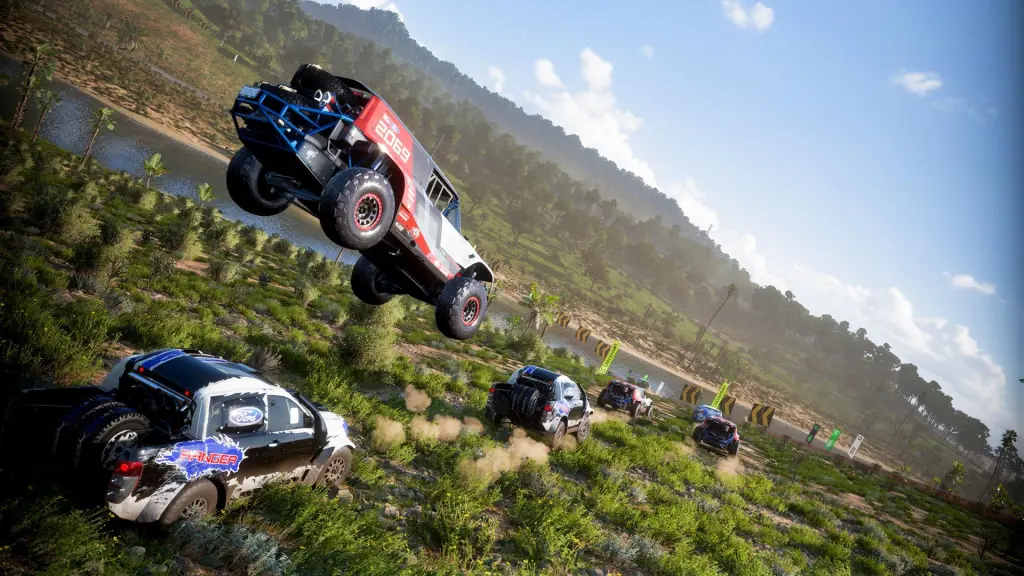 Forza Horizon 5 has once again impressively shown how popular racing games can still be if presented in such quality.

Whether you’re an old-school fan or you first smelled the air of racing with “Forza 5,” in this list of ten alternatives to the latest game from Playground Games, you should have at least one item that suits your taste. For curious beginners, Forza Horizon 5 is just the beginning of a long journey through the rich and diverse world of racing games.

The mood at Forza’s house wouldn’t be so good this Christmas if one didn’t mention Horizon 5’s brother. While the “Horizon” group is with its mates at the festival and partying in Mexico, the more visible “Motorsport” group sits down to study and reads a brochure on shock absorbers.

It’s a track racing game where the goal is to adjust settings and save throttle points so it’s easier to handle instead of entering your Netflix login credentials. Then you have to use those skills in online races – at least until “DarkLordButters89” hits you in the back and shoots off the track. However: this rightly rendered racing game shows that reach and depth don’t have to be separate, but rather have a place together on a racetrack.

Supposedly there are more realistic racing games than Mario Kart 8. You don’t have to let a giant live ball drag you over a stretch of rainbow to see it. But is there a racing game that looks more perfect?

There is a serious question. Maybe it’s because of the famous Nintendo magic that Mario Kart 8 is streaming for the Switch. There’s a little of it in every exhilarating Powerslide sled and every shortcut and new trails, from the dreamy waves of Sweet Sweet Canyon to the many trails on Mount Wario, generously covered. There are even a few pills sticking to the blue tanks that will take you off course. This is the only game that players are allowed to destroy shortly before the finish line without having to immediately uninstall it in a rage.

There are racing games and there are racing simulators. If you’re not sure what kind of game you’re playing, count the number of times you drift off the track in the first turn. If it’s about 300 times, you’re probably playing Assetto Corsa Competizione (ACC).

ACC uses the official license from the Blancpain Endurance Series and presents a pure picture of racing that hides nothing. Everything in this simulation is designed. Brake Temperatures, Tire Temperatures, Temperature Tracking – If you can measure something with a thermometer, this game will force you to respect the value and adapt your driving style accordingly. The rewards are plentiful and unique, however – no other game will make you feel like a pro taking a minute warm-up at Silverstone on a rainy morning to get some heat in your tires and brakes to qualify.

7. Arena of the Stars

Isometric views? There is definitely no place for such an old camera mode in modern racing games! At least one has to believe that.

Circuit Superstars offers a unique blend of simulation and arcade racing from above. Tracks become rubbery over time and provide more stability for vehicles. Tires degrade. Fuel is running out. And all the while you are thrilled that the finest cars that rolled off the assembly line in Tiny Town are cruising on the right track.

Ubisoft’s open world racing game is one of the surprise games of 2018. It is based on a cleverly shrunken version of the US that you can drive through in about an hour. You may see St. Louis Arch, Mount Rushmore, Yellowstone Park, and Roswell along the way. Or maybe you’re too busy keeping Koenigsegg Jesko in check at 300 km/h fighting a Bugatti Divo to see the sights.

See also  Four wins, but only two Schalke players on the field

And, as if that wasn’t enough, transform yourself into an airplane with the push of a button and take to the skies – only to plunge into the ocean in a speedboat from 6000 meters and explore the Florida Keys. Better than standing in a traffic jam.

Gran Turismo has made a name for itself with its realistic driving behaviour. And that’s exactly what it continues to offer in the final installment of the GT Sport series. This time, however, it’s not just up to you not to crash.

The singles match and Sunday Cup are over. Instead, there are multiplayer races where everyone gives everything. But you should not drive with the knife between your teeth, it will be punished here. Clean overtaking maneuvers, sensible defense, sporty behavior – these are the phrases that immerse you in every corner. The result is a fairer motorsport than many other online racing games.

Looks like you could have been more ambitious building Hot Wheels tracks as a kid. Or did you ever get permission to take entire skate parks and auto repair shops with your own colorful, licensed runs? You probably never asked for it either.

Hot Wheels Unleashed is a platform where you can catch up on it all. The collection is great to look at, as dinosaurs, garbage trucks and old Aston Martins can all live in harmony. The races are amazingly demanding – you can allow yourself to push a nudge or two in the side, but you have to master the idiosyncrasies of each car to keep it straight.

By now, you’ve probably seen a lot of asphalt. Carefully laid flat asphalt is the natural habitat of cars, where they have their home and sleep. If you rob them of this habitat, they become nervous, turning their wheels in distress and swinging their rear ends to fend off predators.

See also  Djokovic is like a goat? Zverev winner in the general service category? Comments by former Osaka coach Pagin

So what Dirt Rally 2 does is really shocking. Here, on loose ground meandering on mountain slopes and through forests, you need a completely different sensitivity when driving than on black asphalt. Especially in a rigorous simulation like this, driving at speed is about a constant swing back and forth, always on the brink between just enough control and the brutal takeoff that decides the race. It’s a glorious, dirty, high-commitment race like no other.

Handling is easy to reach but balanced. A wide range of dream cars. Huge city maps with event markers, chattering NPCs and wide body combos. “Need For Speed” stood so that “Forza Horizon” could be played. And with ‘Heat’ from 2019, ‘NfS’ shows it’s not entirely behind on development. exactly the contrary.

Palm City is a great Miami experience, and that’s a great excuse to pull off the chunky ’80s tracksuit models and sprinkle them with pastel colors that would make Don Johnson’s slim-stitched suit pants even tighter. The soundtrack is full of explosions.

It’s not just an F1 game. It’s À la Recherche du Temps Perdu’ licensed racing game that illuminates every aspect of the sport down to the smallest detail. Build a team from scratch, design the decoration, sign sponsorship agreements, and do it in the race – why not. Then navigate your way through endless upgrade options to keep your car competitive.

Or take part in a sprint and recreate all the confrontations Hamilton and Verstappen have seen this season. No matter which direction you’re moving, ‘F1 2021’ is hardly distinguishable from TV pictures and feels like a real F1 driver, fiddling with the settings on the steering wheel, squeezing your way through the tightest of gaps, driving to the podium – or you should. It answers difficult questions after an early disqualification.