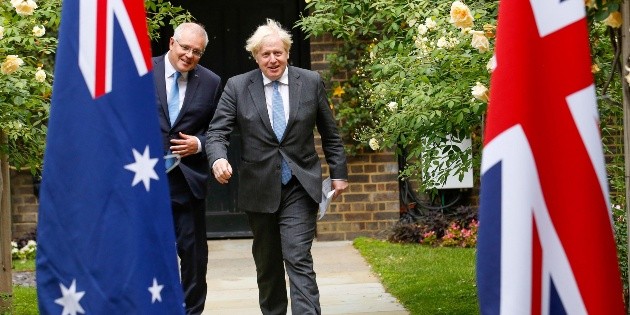 The United Kingdom has concluded a “historic” post-Brexit trade agreement with Australia, which will open the doors to the Asia-Pacific region, following the trade agreements it has already concluded with the European Union, Japan and Norway.

According to a statement published by the Prime Minister’s Office, on Tuesday, this is the first trade agreement reached by the United Kingdom that does not consist of renewing or amending an existing agreement between the European Union and other countries.

Prime Minister Boris Johnson emphasized in the statement that “today opens a new era in the UK-Australia relationship”, with this free trade agreement providing “impressive possibilities for British businesses and consumers”.

The person in charge once again flaunted his idea of ​​’global Britain’ or ‘planetary Great Britain’ with it Trying to reassert the country’s international luster after leaving the European Union (European Union). In addition to trade, the two countries want to increase cooperation in the areas of security, climate change and technology. The British leader finalized the details of this agreement on Monday evening in London with his Australian counterpart Scott Morrison.

The agreement, to be published in the next few days, will allow all British goods to enter Australia duty-free. Trade between the two countries represented 13.9 billion pounds ($19.6 billion) in 2020, a year marked by a pandemic though. In 2019, the UK was Australia’s fifth largest trading partner.

He is currently negotiating with India and New Zealand. Talks with Canada and . are also planned Mexico. The UK is also considering a trade agreement with the US, although there has been little progress so far and the issue was not raised at the meeting between Johnson and US President Joe Biden.