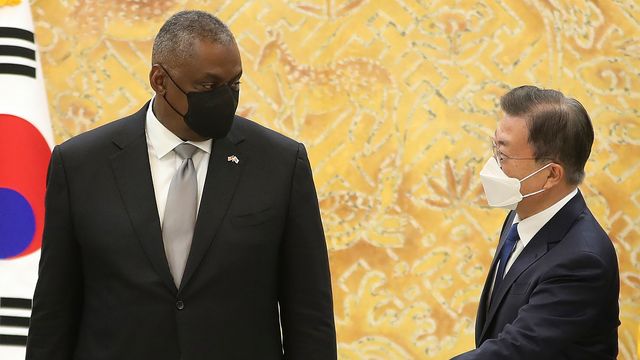 Seoul (Associated Press) – The United States and South Korea want to update their military deployment plans in the event of a new conflict with North Korea.

By updating contingency plans, allies are responding to progress in developing North Korea’s nuclear weapons and missile programs. US Defense Secretary Lloyd Austin accused North Korea Thursday in the South Korean capital of Seoul of increasingly destabilizing the region by further developing its weapons programs. But he made it clear that Washington is ready to continue dialogue with Pyongyang.

Austin and his South Korean counterpart Suh Wook agreed on a new “strategic planning direction” as part of their regular security consultations. The Instructions should form the basis for the Alliance’s new Operational Plans (OPLANs). Details are not mentioned.

She said in a joint communication that the agreement reflects “changes in the strategic environment.” The ministers expressed the expectation that with the new contingency plans, the two countries could “achieve a greater deterrent effect on threats from the People’s Republic of Korea” (North Korea) “and respond to them if necessary.”

And “Defense One” magazine previously quoted a US official who traveled with Austin on a plane to South Korea that the decision to change operational plans was not taken due to “extreme threats.” “We’ve seen progress in North Korea’s capabilities, particularly in its missile launch capabilities.”

During a visit to South Korea in March, Austin and US Secretary of State Anthony Blinken emphasized that they would continue to pursue the goal of “complete denuclearization of the Korean Peninsula.” Both countries understand that denuclearization means the complete disarmament of North Korea’s nuclear arsenal. Austin said Thursday that diplomacy remains the best approach. We invite North Korea to engage in dialogue.”

US negotiations with the largely isolated government in Pyongyang have not progressed for more than two and a half years. North Korea, which accuses the United States of aggressive policies, is subject to international sanctions over its nuclear program. This year, the country again tested missiles and cruise missiles that were said to be capable of carrying nuclear warheads. The country has declared itself a nuclear power, but its status remains unclear internationally due to negotiations.