The floods in Western Europe were caused by climate change 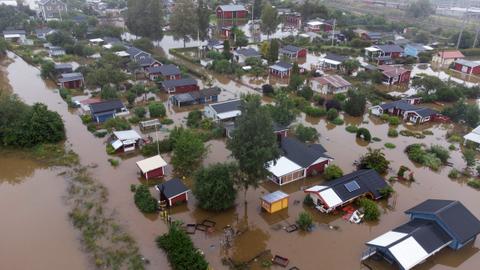 According to a new study, European countries are nine times more likely to be affected by devastating floods with increased risks from climate change.

Historic rains, followed by deadly floods, have caused havoc across much of Western Europe over the past month. Deadly floods in Germany and Belgium killed at least 218 people and destroyed dozens of settlements and infrastructure in the region.

But the cause of this catastrophe is directly related to human behavior in natural habitats.

The catastrophic floods that ravaged many parts of Europe appear, in large part, from man-made climate change. New study It was released on Tuesday, indicating that the probability of heavy rain has increased ninefold due to global warming.

Scientists are studying heavy rainfall, in an effort to understand whether climate change is a major precursor to hurricanes and floods.

The study of 39 researchers from Germany, Belgium, the Netherlands, Switzerland, France, Luxembourg, the United States and the United Kingdom provided evidence based on regional climate observations, high-resolution simulation models and comparative data analysis.

According to the results, 90 mm of precipitation was recorded in Ahr / Erft in Germany and in the Belgian part of the Meuse River on a summer day. The large amount of precipitation in these small areas was dependent on local weather conditions, so the scientists decided to expand the sample survey to other countries.

Then 39 researchers expanded their search to study Understand the global impact of climate change on precipitation by including other countries such as France, the Netherlands, Luxembourg and northern Switzerland.

See also  The mathematical approach that could change coronavirus tests

In the end, they found that climate change increased the amount of precipitation that fell on a single summer day by 3 to 19 percent, because the likelihood of heavy rains in Western Europe was due to man-made climate change.

It is clear that humans are changing and warming the Earth’s climate. And with this warming, we also see a change in extreme weather conditions.” I noticed Doctor. Frank Kreienkamp of the German Weather Service, co-author of the study.

A 1.2°C rise in air temperature multiplied the factors that affected devastating floods by 1.2 to 9 times as warmer air produces more water to be stored in the atmosphere and leads to heavier rainfall.

A terrible event such as a flood is expected to occur in Western Europe every 400 years. However, persistent greenhouse gas emissions and rising air temperatures increase the risk of heavy rainfall, which can lead to flooding.

“These floods showed us that even developed countries are not immune to the severe effects of the extreme weather conditions we have seen,” he said. I noticed Doctor. Frederic Otto, co-chair of the scientific study, points out that such floods are likely to be more frequent in Europe.

This is an urgent global challenge that we must face. The science is clear and has been for years.”