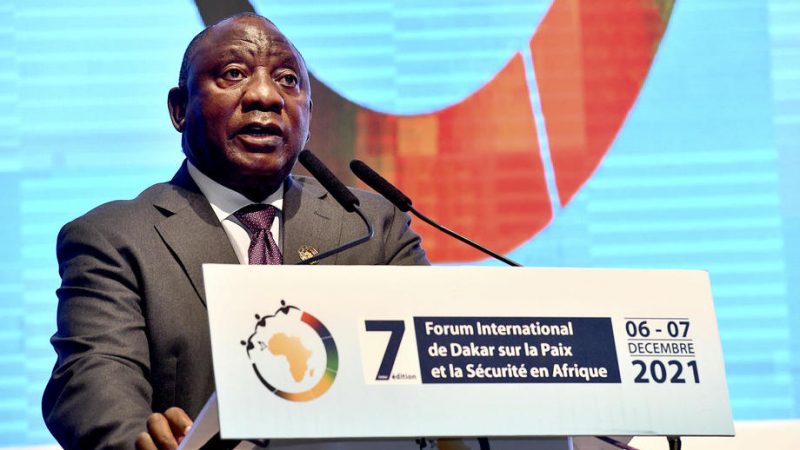 South African President Cyril Ramaphosa has once again criticized the European Union’s handling of the COVID-19 virus. He accused them of “vaccine apartheid,” and said the new travel ban on travelers from some African countries goes against scientific reasoning.

At a conference in Dakar, Senegal, on Monday (December 6), Ramaphosa criticized new restrictions imposed by the European Union, the United Kingdom and the United States after the discovery of the Omicron variant.

“One wonders: Where is the science? They have always told us to base our decisions on science, but when the moment comes when they have to be scientific decisions, they are not,” he said.

“Their greed has been disappointing, especially when they claim to be our partners. Because our lives in Africa are just as important as life in Europe, North America and everywhere else.”

Meanwhile, Senegalese President Mackay Sall has warned that the reaction of Western countries increases the risk that countries will withhold information about future COVID-19 variants because they fear similar effects.

And the President of the European Council, Charles Michel, tried to downplay the importance of Ramaphosa’s statements, calling them “dramatic statements”.

However, the European Union is well aware that it is subject to accusations of nationalist vaccines. African heads of state and government’s anger over new travel restrictions threatens already-delayed plans for a “strategic partnership” between the two blocs, which are due to be agreed at an EU-Africa summit early next year.

See also  Other mammals and reptiles have become extinct in Australia

Von der Leyen also promised to “intensify our efforts to support Africa, where vaccination protection is lower than in other parts of the world.”

“Our goal is to vaccinate 70 percent of the world’s population by the middle of next year,” she said.

The recent rise in COVID-19 transmission in Europe linked to the Omicron variant has made donors more nervous about giving vaccines.

Ramaphosa also advocates exempting intellectual property for COVID vaccines so that South Africa and other countries can manufacture their own generic vaccines and increase the number of vaccines.

The European Union remains one of the main opponents of the temporary exemption of intellectual property. A World Trade Organization meeting scheduled for last week, whose members are supposed to reduce the value of a possible issuance of patents for a vaccine, has been postponed indefinitely due to the Omicron variant.

But in recent weeks, the European Union has backed BioNTech’s plans to set up vaccine manufacturing facilities in Senegal and Rwanda, as part of a commitment to build manufacturing capacity in Africa.

There is an ongoing dispute between COVAX and donor countries over the so-called “internal” doses that vaccine manufacturers gave to rich countries but are now stored in national warehouses or cold stores.

Donor countries are willing to donate unused cans. But COVAX reported that many donations are given without notice and with a short shelf life, making it difficult to schedule in national vaccination campaigns and submit before they expire.

A recent report from Duke University found that the G7 countries and the European Union have a vaccine surplus of 830 million doses this year. By the end of 2021, 650 million doses will be needed for the World Health Organization to achieve its goal of 40 percent global vaccination coverage.