Regional security is the focus of the talks 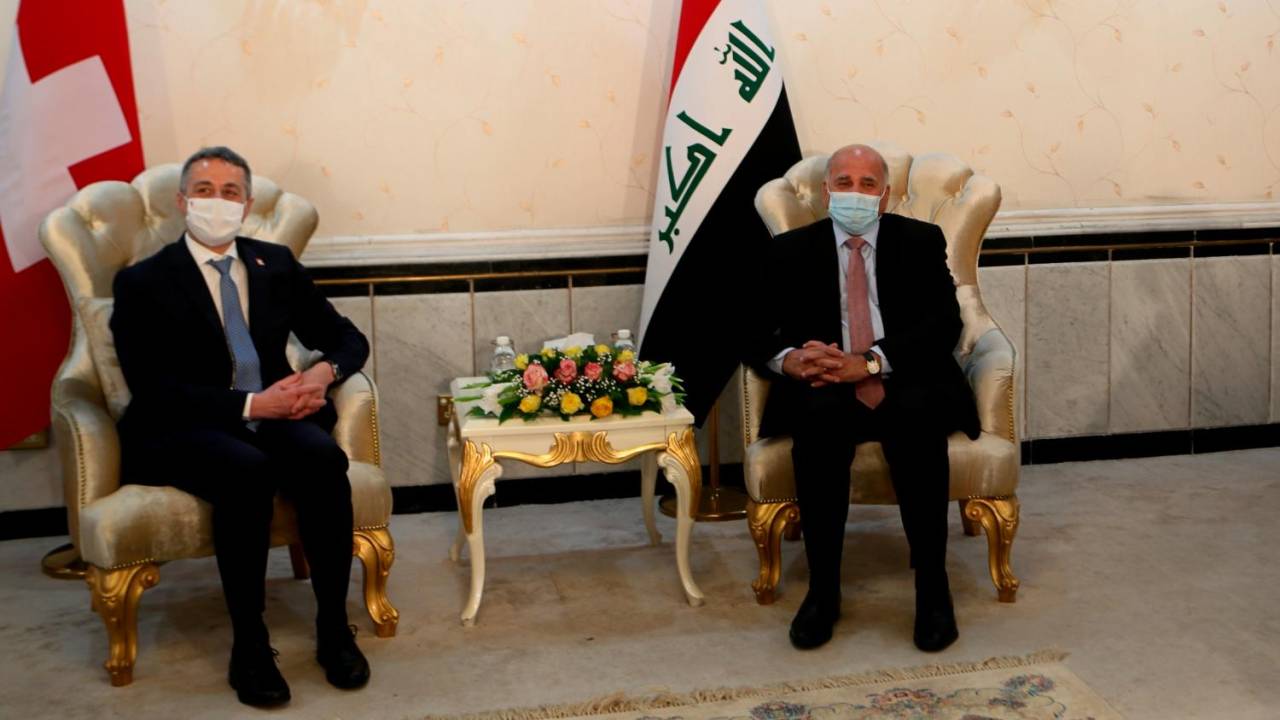 Federal Counselor Ignacio Cassis met during his official visit to Iraq with his counterpart, Foreign Minister Fuad Hussein, Prime Minister Mustafa Al-Kazemi and Parliament Speaker Muhammad al-Halbousi. The talks focused on the priorities of the Middle East and North Africa strategy, in particular Switzerland’s commitment to promoting dialogue and regional stability. Iraq is the first stop on a trip to the region that will also take him to Oman and Lebanon.

Promoting peace and security in the Middle East is one of the priorities of the Federal Council’s strategy for the Middle East and North Africa. During the talks, Federal Chancellor Ignazio Cassis confirmed Switzerland’s readiness to commit to reducing tensions in the region. Iraq was often the first victim of the confrontation between the United States and Iran. The head of the Federal Foreign Office (FDFA) said that Switzerland will continue to play a constructive role in Iraq and the region in promoting dialogue. His interlocutors welcomed our country’s commitment, especially in the area of ​​water diplomacy. Through the Blue Peace Initiative, Switzerland wants to encourage cooperation between countries in the region on joint management of water resources.

In Baghdad, the head of the FDFA stressed Switzerland’s humanitarian commitment in Iraq. After the devastation caused by the Islamic State, there are still four million people in the country in need of assistance. Since 2014, Switzerland has contributed more than 80 million francs. The official talks also touched on the issue of immigration and the desire to strengthen bilateral cooperation in this field.

READ  Tesla is pushing a new Beta update for autonomous driving, says Elon Musk, that could cut interventions by a third

On the occasion of the visit, Federal Counselor Ignazio Cassis and his counterpart Fouad Hussein signed a declaration of intent to hold political consultations between Switzerland and Iraq. This agreement paves the way for the strengthening of bilateral relations. Ignacio Cassis also discussed the possibility of reopening a Swiss embassy in Iraq. Switzerland closed the liaison office in Baghdad in 2008 for security reasons.

Finally, the President of the FDFA met Cardinal Louis Raphael I Sacco, Patriarch of Babylon and the Chaldean Catholic Church, with whom he discussed interfaith dialogue and the situation of minorities in the region.

Iraq has a young and well-educated population, yet it struggles to find professional opportunities. In Baghdad, Federal Chancellor Ignazio Cassis met with some young entrepreneurs from the Iraqi startup scene. Discussions focused particularly on innovation, professional training, and obstacles facing entrepreneurs. “For me, young people are always the bearers of hope. This exchange of views with Iraqi and Iraqi youth, full of ideas and possibilities, makes me feel optimistic and makes me believe that the country will be able to recover by overcoming the many crises it has had to face. ”The meeting took place in a stadium designed by Swiss architect Le Corbusier in 2005. 1950.