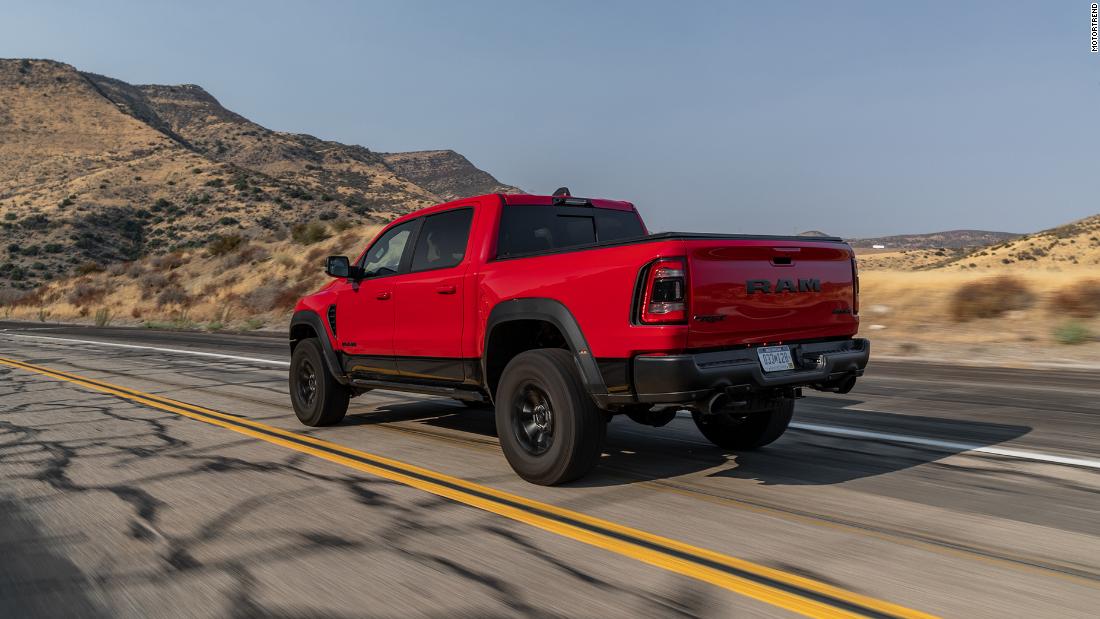 Besides the raw power and speed of the 1500 TRX – it is able to go from zero to 60 mph in 4.1 seconds, making it the fastest pickup MotorTrend has ever tested – the judges also noted the truck’s high level of interior quality and relatively improved driving performance on the road. .

The TRX is truly built to excel on the off-road. Thanks to its large wheels and tires, the truck’s body rides about a foot off the ground. That’s two inches off the ground compared to the standard Ram 1500 four-wheel drive truck.

The TRX suspension system is specially designed to handle rough terrain at speeds of over 100 mph. The 1500 TRX includes a computerized “Jump Detection System”, which recognizes when it becomes airborne and automatically controls the power from the engine so that transmission and engine components are not damaged as the truck bounces to the ground causing sudden fatigue. The system also provides the best possible performance as the tires meet the ground again, according to Fiat Chrysler. Special air filtration systems protect the engine from dust and dirt that occur during off-road driving.

Even when towing a large camping trailer, the TRX still went from zero to 60 mph faster than some of the other trucks in the competition when they were towing nothing.

Value is one of the MotorTrend award criteria. TRX won despite an initial price of over $ 70K. The judges believed the truck’s performance and features, as well as the quality of the interior, with which they compared those in Audi and Mercedes-Benz cars, were well worth the cost.

They pointed to one problem, The truck’s fuel economy was. TRX gets an estimated 14 miles per gallon from the EPA for highway driving and only 10 mpg for city driving.

The TRX’s biggest rival, the high-performance Ford Raptor pickup truck, was not a contender for a MotorTrend award. To be eligible for the Truck of the Year award, your pickup truck must be either a completely new model or a major redesign for the New Year. The Ford Raptor was last redesigned for 2018.

Thanks to its large V8 Supercharged engine, the RAM TRX greatly outperforms the Raptor, which has a 450hp V6. However, Ford recently started production of a redesigned version of the F-150 pickup truck the Raptor is based on. The redesigned Raptor is expected to be revealed soon as well.

Besides TRX, the other nominees for this year’s award were the Ford Super Duty, Jeep Gladiator, Nissan Frontier and Nissan Titan. A MotorTrend spokesperson said the new F-150 was not included as it was not ready in time.

The trucks went through pre-packaged tests, and the results were measured using computer screens. MotorTrend employees then led all of the contenders and met to discuss their impressions and vote for the winner.

MotorTrend awards similar awards for its Car of the Year award Mercedes E Class This year, this year’s SUV, which I went to Land Rover Defender.