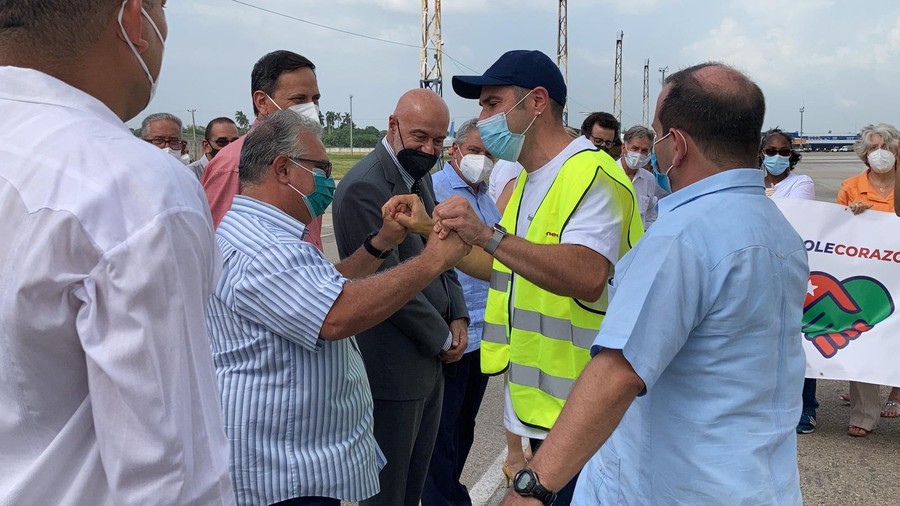 The solidarity contribution sent by Italy, which amounts to about 200 cubic meters of medicines, materials and medical equipment to meet the Covid-19 emergency in a country subject to embargo and sanctions by the United States, has arrived in Cuba. The shipment includes lung ventilators, hospital medicines and antibiotics, healthcare supplies and SARS Cov-2 rapid detection tests, which were donated by organizations and individuals and from Italy, Spain, France and Cubans residing in those countries.

Also among the donors are the Ceriale and Imperia Departments of the Italian-Cuban Friendship Society, which collected about 3 cubic meters of material. “We thank those who helped us – announced upon the departure of the material from the Cerialese and Imperia circles – and we also send thanks to the Cuban doctors who came to Italy. As associations we demand an end to the embargo and we propose to award the Cuban medical brigade Henri Reeve the Nobel Peace Prize.”

“We dedicate this group to the memory of Lester Cabrera Chavez and Graciliano Diaz Bartolo, two doctors who sadly died while busy treating people affected by the epidemic: they fell to help others,” they added from Cereal and Imperia.

Miguel Mario Diaz-Canel Bermúdez and Bruno Rodriguez, President and Minister of Foreign Affairs of Cuba, publicly thanked for this important donation. Upon the plane’s arrival at Havana’s Jose Marti International Airport, the head of the Agency for Cultural and Economic Exchange with Cuba (AICEC), Michele Corto, said instead that the combination was possible thanks to the immediate response to the #PoniéndoleCorazónACuba campaign.

Corto also noted that within three weeks nearly one and a half million euros had been raised to purchase medicines, supplies and equipment intended to help the Cuban people: “an effort – he said – that will continue as long as necessary.”

This initiative was born out of the cooperation between the Center for Cuban Workers (CTC), the National Coordinator of Cubans Residing in Italy (Conaci) and the Italian General Labor Confederation (CGIL), among many organizations. According to the letter sent by the General Secretary of the General Center for the New Generation, Maurizio Landini, to the representative of Ctc, Ulises Gillarti, the Italian General Federation of Workers raised nearly 280,000 euros ($330,000) in three weeks to buy the donations.