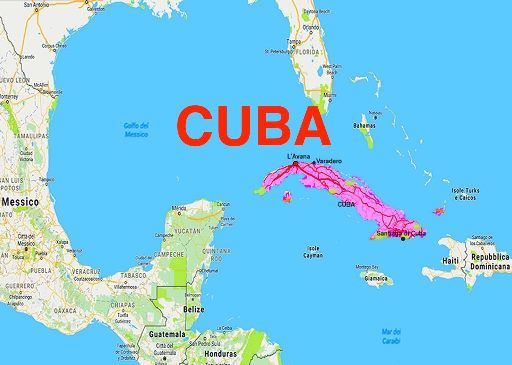 New Tosia – Rome – A purely political subordinate work. It is difficult to express itself differently from Italy voting – however, in good company with other European countries allied with the USA – against the proposal submitted in the last 23 to the United Nations Human Rights Council regarding the negative implications of the economic sanctions applied by some countries against Others. Hence the following note prepared by Mauro Avilo for PCI Lazio, from the PCI Lazio Regional Committee and a member of the National Administration of the National Italian-Cuban Friendship Association.

Thank you Cuba: Doctors, not bombs

Italy’s position in the United Nations Human Rights Council is shameful and extremely dangerous. “It was not a direct vote against Cuba,” says Secretary of State Di Maio, and thus in favor of the US economic blockade. It was much more than that, in our opinion, because a resolution passed by China and Azerbaijan was voted on. And Palestine, which condemns the use of means of coercion and unilateral sanctions towards other countries to settle international disputes that are nothing more than true “economic wars” with the sole purpose of destroying the economy of countries which it considers themselves “enemies”.

Wars that seriously affect the daily lives of people driven to hunger and deprived of access to education and adequate health care in disregard of the most basic human rights. There are currently dozens of countries subject to economic, financial and trade blocs of various kinds: Cuba, Venezuela, Nicaragua, Syria, Azerbaijan, Afghanistan, Iran, Iraq, North Korea, China, Belarus, Russia, Yemen, Zimbabwe, Myanmar, Lebanon. Libya, Somalia, Central Africa, Burundi, the Congo, and of course the tormented Palestine … Practically all socialist or non-aligned countries, that is, the last countries in the world that were not indebted to the International Monetary Fund and therefore “sovereign states” were not subject to the control of the United States’ empire. The President of the United States, Biden, who has just assumed office, has relaunched the need to strengthen NATO in anticipation of a new cold war against China, Russia and all “enemies”, so much so that in that committee they voted against the resolution, and thus in favor of economic wars, all NATO countries that are part from him. Fortunately, the ruling was passed by a majority of 30 votes, two abstentions, and 15 against, indicating the existence of states and states with greater dignity and political independence than those in the “First World,” highlighting once again just how little our dignity is. “Poor Italy” and what are the reasons that led Europe to impose Draghi on us: to adopt a state that has ceased to exist due to the failure of liberal policies over the past 30 years, exhausted by the epidemic, without further politics, economic and military? Sovereignty and bowing to the empire of the United States. And what is more shameful is the statements of this government in response to the controversy that arose over the Italian vote, which, despite its assertion of support for our diplomacy in Cuba, shows the weakness and opportunism of our country’s policy, forgetting that in light of the epidemic not only Cuba, it came to our aid with a brigade Henry Reeve, the medical doctor, but also with China and Russia with materials, equipment and doctors.

For us Communists, “words are stones” and we hope that not only the government, but also all the Italian people, will strongly support the United Nations resolution condemning the blockade that Cuba will present every year, as well as the Nobel Peace Prize nomination. The “Henry Reeve Brigade Doctors” who continue to work to support every nation in need. We owe him not only to repay the debt of gratitude to a wonderful country that helped us in the darkest moments of the epidemic, but to affirm the principle of international solidarity for the sake of which all peoples have the right to self-determination. Despite those who want to dominate others by trampling on this right, one can only get out of crises through multilateralism and solidarity between peoples. “We do not come to present what remains, but to share what we have.” In this sentence in which Cuban doctors introduced themselves last year in Crema, there is the essence of the Cuban revolution, there is the essence of communism and socialism, an example of a society alternative to capitalist and liberal society, which today shows more than Ever all their evils and failures, which is why it frightens the empire of stars and schemes. Fidel said, “Our country will never launch any sudden or preventive military attack in any dark corner of the world, but Cuba is capable and will be able to send the best doctors to the darkest corner of the world, where there is a need for that.” Doctors, not bombs! This is the foreign policy that would make us proud of our country, this is the society that we so badly want to build, this is the revolution that the Italian Communist Party wants to achieve.

Mauro Avello, from the PCI Lazio Regional Committee and a member of the National Directorate for Italian-Cuban National League of Friendship.