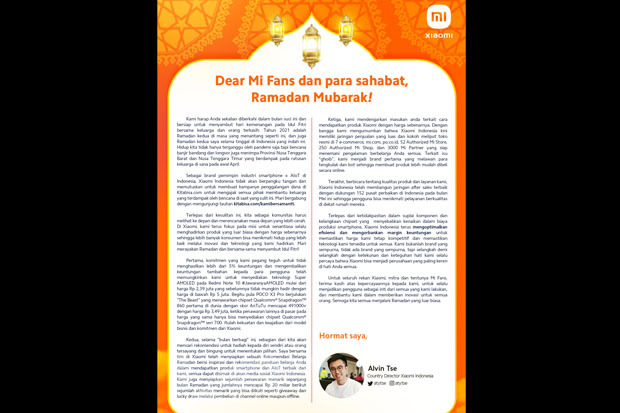 Jakarta – Xiaomi Indonesia Country Director, Alvin Tse invited Mi Fans and Xiaomi friends to celebrate the joy of Ramadan through a number of activities. In a message issued by Xiaomi, the message also reported a number of the latest developments from the manufacturer.

At the beginning of the speech, Alvin spoke about the second month of Ramadan in Indonesia, which coincided with the COVID-19 pandemic. Amid this difficult time, disasters in the form of floods and landslides occurred at several points in the provinces of East Nusa Tenggara and West Nusa Tenggara.

Read also: Plated with pure 24k gold, it is the most expensive Tesla car in the world

For this reason, Xiaomi Indonesia created a fundraising campaign inviting everyone to participate in helping the families affected by the disaster there. With the advent of Ramadan, Alvin also said that Xiaomi is committed to offering extraordinary products at real prices. The goal is that more consumers can enjoy a better life through technological innovation.

The letter also clarified Xiaomi’s business model that allows users to get high-tech products at low prices. To help consumers who are confused about choosing the right Xiaomi product, Alvin mentioned that his party has released a Ramadan shopping guide that can be found on Xiaomi Indonesia’s social media accounts.

This shopping guide, released regularly, contains a number of product recommendations and inspirations that can be purchased as needed. For example, going during Ramadan with your little one to choose the best performing smartphone.

Read also: Porsche executives want their cars to be like iPhones

Through the message, Alvin reported a number of milestones by Xiaomi Indonesia in facilitating users’ access to smartphones and AIoT products. Such as the growth of the sales network through both online and offline channels.

In providing the best after-sales service to users, Alvin has also reported the growth of an after-sales point that is increasingly accessible from consumers’ homes. He closed the letter by saying that they expect to face the problem of sourcing components and scarcity of chips that has increased the costs of producing smartphones.