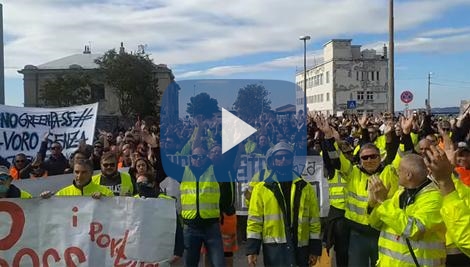 Black Friday transportation and activities for the declared mass to protest the introduction of the Green Corridor have been announced, and the government is in the meantime considering reducing the cost of tampons – Guarantee Committee: “unlawful strikes” – Luca Tuodori of M3V in the video says: “We have great strength, state of workers The pavement shows that the system is creaking, the only solution is to respond and then wait for the political response” – Gimbe data shows how reluctant Italians seem to order the third dose – at the hearing before the Committee on Constitutional Affairs Prof.D. Researcher Marco Cosentino and Professor of Toxicology, Pharmacology declared that the assumptions on which the Green Corridor is based are completely unfounded: “A vaccinated infection is like the others” – an outbreak in a Foggia dispensary, they were all vaccinated – France, the Senate (led by the opposition) rejected a proposal aimed To introduce a commitment to vaccination – in northern Australia, the most difficult vaccination commitment to date – Dr Massimo Citro was also suspended for not receiving a vaccination – an epic moment in the United States Congress as Senator Paul Rand Xavier Becerra ruthlessly attacked Secretary of the Department of Health and Human Services: by ignoring natural immunity You and Fauci ignore science”