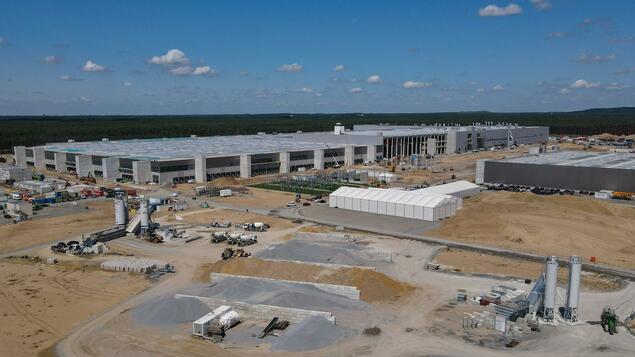 Anton Hofriter, the leader of the green parliamentary group, has dismissed concerns from environmental groups that Tesla’s new European electric car factory in Grünheide near Berlin could erode the region. “The approval process is going smoothly in accordance with the law,” Hofriter said Monday at Tagesspiegel in Grunheide after a visit to the main construction site.

According to his inquiries, the Gigafactory’s water supply can be “represented”, the water consumption has been “optimized”, and the area has been designated as an industrial zone since 2008, Hofreiter said.

“I think it’s great to build zero-emissions cars here.” In addition to a change in traffic to more buses and trains and an increase in the ease of cycling and pedestrians, a “real driving change” is also necessary in Germany to protect the climate. “Because in rural areas especially, and in Brandenburg a lot of rural areas, the car will always play a major role.” It will be electric in the future. 12,000 sustainable jobs are also a contribution to tackling the climate crisis.

Previously, Hoffreiter and Michael Kellner, Brandenburg’s Green Party co-candidates in the federal election, had routed them through the factory.

“It was legitimate to ask questions and express criticism,” Kellner said of the concerns. “In all previous court decisions, government actions have been confirmed.”

Just last week, environmental groups filed a new 109-page objection against a near-completed Tesla plant in danger of continuing approval and warned Berlin scientists of negative consequences for the Müggelspree.

Unlike the recent visit of the CDU candidate for chancellor Armin Laschet and Elon Musk were not allowed in this time with journalists in the building. In the meeting with the CEO, Laschet spoke in favor of changing Germany’s collective action law in order to speed up the planning process. “This shows that the CDU candidate for chancellor has no idea about modern licensing law,” Hofriter said. “This is EU law or international law”

The CDU is building cardboard comrades that can’t be done. However, it is necessary to significantly speed up the planning process. This is possible, for example, through more personnel in the authorities, but also through the integration of spatial and plan approval procedures. It can’t be that 16 years after the CDU government, new wind farms won’t be approved until six to nine years later, with red and green still six to nine months.

Laschet didn’t want to commit himself to electric mobility like the traffic technology of the future during his visit, which Musk had just laughed at.

There was agreement on this with these political guests. Tesla called for the expansion of renewable energies and said “the future of the car is battery electric,” Hofriter said. “This is not a surprise to us” for financial reasons only.

Confusion in the CDU, SPD, and FDP about opening up to synthetic fuel technology and hydrogen engines shows limited knowledge of physics. “To move a hydrogen-powered car, you need three to four times the initial energy for the same distance,” Hofriter said. In the case of synthetic fuels, the ratio is more unfavorable. Elon Musk would have entertained visitors to the Greens, who might soon become part of the government in Berlin.

See also  Listed here we occur with a fleet of spacecraft