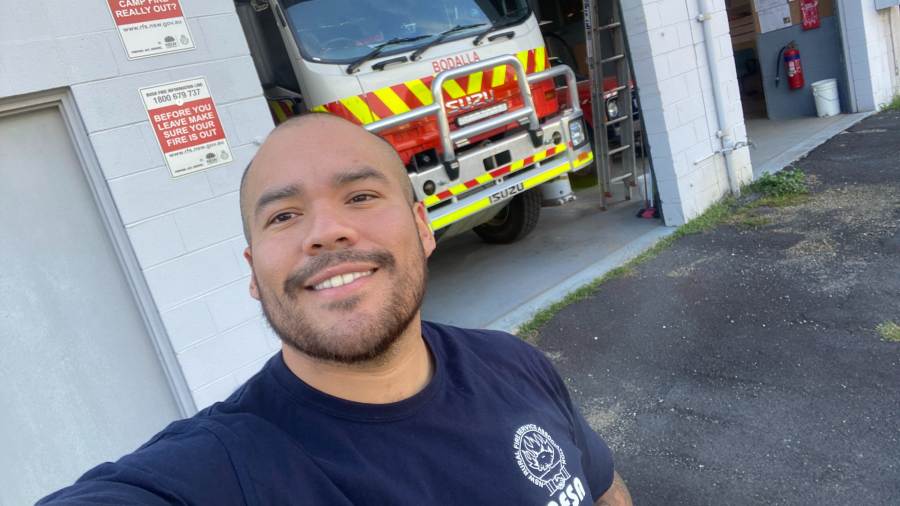 Four years ago he came to kangaroo land and did everything to survive. Now he is a manager of a supermarket chain.

Four years ago, George Valencia searched for a new horizon, he did not imagine that this change would be comprehensive in his life, and now he will put out fires in Budala, in New South Wales, a small town on the coast of Australia, as a volunteer firefighter.

In addition to facing the flames of the ongoing bushfires in Podala, and doing so voluntarily, George is a manager at a supermarket chain. During his stay in El Salvador, he also volunteered in various organizations in the country and at one of the universities where he studied communications.

You may be interested in: David Fuentes, a young man who sells chocolate in Antiguo Cuscatlán to pay for college and aspires to play baseball in the United States.

George remembers that it was not easy to reach a far country with different customs.

“One of my best friends lived here for a few years and invited me to come but because he had a small business there, but he didn’t come until the“ boys ”gave me reasons to think about coming here, smiling with a cold mouth and sweat, this is how I came and it was not easy, he said to El Diario de Hoy.

George maintains that it was difficult to find his way in the land of the kangaroos.

“I worked in construction, as a cook and now I’m a manager of a supermarket chain. It wasn’t easy for many reasons, but it gave me a tremendous relief because everywhere I worked, Salvadorans always told me they were excellent workers,” says this young man.

But George managed to go up: he’s now the manager of a supermarket chain called Woolworths.

Like many Salvadorans who left their homeland in search of better prospects, he realizes how difficult it can be to make one’s way in a country where everything is different and lacks the warmth of family and friends.

In his new home, George also contributes his time serving in Budala, the city that has welcomed him. “I’m currently part of the volunteer fire brigade in Budala in NSW, a town on the south coast,” he says.

“I never imagined that the first test would be so big, when the wildfires in the New Year 2020 destroyed a lot of places near where I lived; in El Salvador, I had suffered from 2001 earthquakes and various tropical storms over the years, but a forest fire of this magnitude was Something different, “he says, recalling that experience.

“It was seven in the morning when I received a call to go to the station and we quickly recovered without knowing that we would face a monster; it was nine in the morning, and the color of the sky began to change to gray, with strong winds that increased the smell of burning wood. When we approached the place of emergency, we were shocked to see what it was. It was formerly green fields, at that time they were fire fields. ” George describes.

“We received the call of the” black symbol “(which means that we had to withdraw because the fire went out of control and endangered our lives), because at that time he was still in training. At noon, the sky was filled with black smoke and ash, as if it were It is 12:00 midnight. On that day, we couldn’t do anything more than help evacuate the people, “he remembers sadly.

According to George, January 2020 was a very difficult month in that region, they suffered from blackouts due to fires, many roads closed and lack of food and fuel.

He notes that by that time he was already in business in the chain of supermarkets and had to ensure the minimum available, plus restocked all products once the roads were enabled.

It can read: Jonathan Larach, a Salvadoran “dreamer” who won a scholarship from Harvard University

Despite everything, he now remembers with joy how his performance in an emergency situation was crucial to his promotion. “After that, they trusted me and promoted me to a director, a position that I currently hold,” he says.

“Being a volunteer firefighter is the way I thank this community in which I live, the welcome and respect they have given me; people always ask me about El Salvador and in fact, a friend from this city recently traveled to El Salvador and told me: ‘The pupusas in El Tunco, the best there are.’ For my part, I will continue to raise the name of El Salvador aloft, “he confirms.