Former President Trump refers to his candidacy for the 2024 election 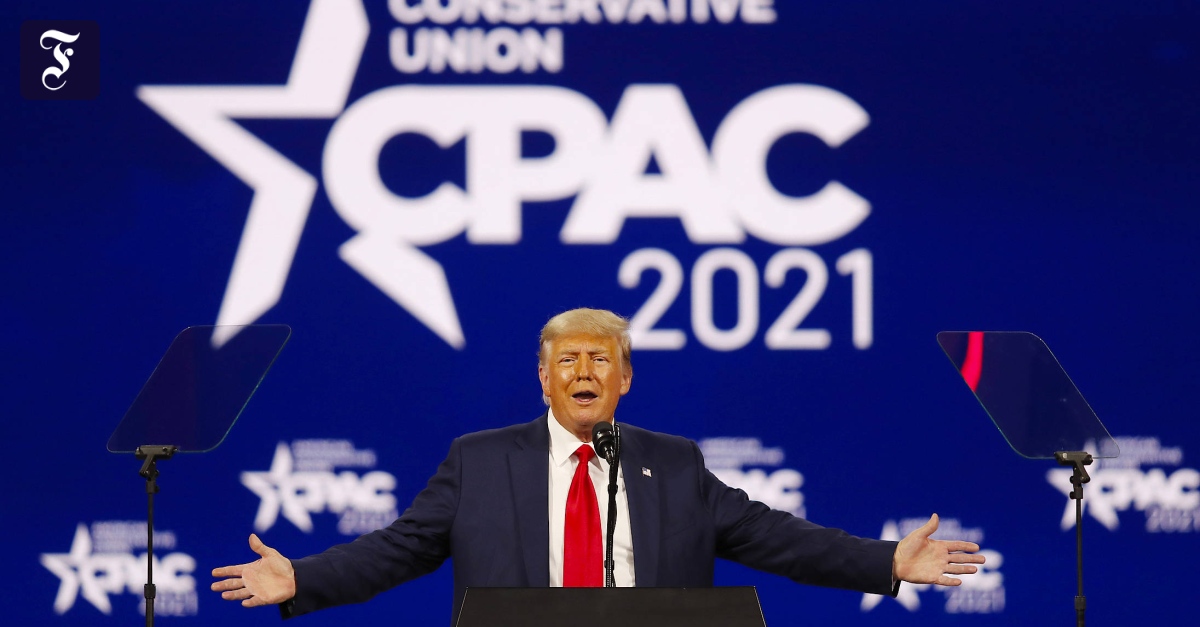 DrIn his first speech since the end of his career, former US President Donald Trump stressed his claim to lead with the Republicans and manipulated the presidential nomination for 2024. Trump said Sunday at the Conservative CPAC in Orlando to cheerful supporters that the Democrats had in fact “lost the White House” in November 3rd elections. “Who knows, maybe I would choose to hit her a third time.”

In his hour-and-a-half speech to conservative activists and politicians, Trump repeated the false claim that he won the election against Democrat Joe Biden. The 74-year-old said it was “impossible” that he had lost, and repeated allegations that often disprove allegations of election fraud. Biden won the election with nearly seven million votes and a clear majority of the electorate.

Five and a half weeks after leaving the White House, Trump has also made it clear that he wants to continue setting the tone with his Republican party. The former president said I will not start a new party. “We have the Republican Party. It will unite and be stronger than ever. ”Media reports that he should have contemplated establishing his party in the past few weeks are“ fake news ”.

Meanwhile, Trump attacked a number of internal party critics by name – especially those parliamentarians who voted against him in the impeachment proceedings for the January 6 storming of the Capitol. He shouted, “Get rid of them all!”

Trump also used his appearance in his new state of Florida to launch numerous attacks against his successor Biden. Trump said this was the “most disastrous first month of all presidents in recent history” for the United States. The new government is “anti-jobs, anti-family, anti-frontier, anti-energy, anti-women, and anti-science.”

Biden opened the border with neighboring Mexico and allowed countless immigrants into the country. The Democrat also leads the United States with the left politics of “radical” to “socialism” and ultimately to “communism.” Trump said that the Republicans “are fighting for the survival of America as we know it.” In the end, Republicans will always win.

Trump fans – most of them without masks despite the coronavirus pandemic – loudly applauded the former president and shouted “USA” and “we love you”. In another hint of a possible renewal of the presidential nomination, Trump emphasized that a Republican candidate would take back the White House in 2024. The former head of state said: “I wonder who he will be.” “Who, who, who?” The Republican had already openly flirted with a new presidential nomination in the past. After he was acquitted in the impeachment process after the storming of the Capitol, that path is essentially open to him.

In an informal poll of CPAC respondents, 95% supported continuing Trump’s policies. 70% would like Trump to run again in 2024. Loyal Trump supporters have gathered at the convention in recent days, while the former president’s internal party critics have turned away from CPAC.

The right-wing populist is not unchallenged in his party. The traditionally conservative camp blames him for the fact that Republicans lost their majorities in the House and Senate during his tenure – and the White House. Even so, Trump still enjoys significant support from large parts of the party and grassroots roots. In his speech, Trump said his support was the “strongest asset” in the Republican primary.

The former president, who is banned from social media, has rarely spoken publicly since leaving the White House on January 20. He just posted some data and gave phone interviews. The 74-year-old now lives on the Mar-a-Lago estate in Palm Beach.