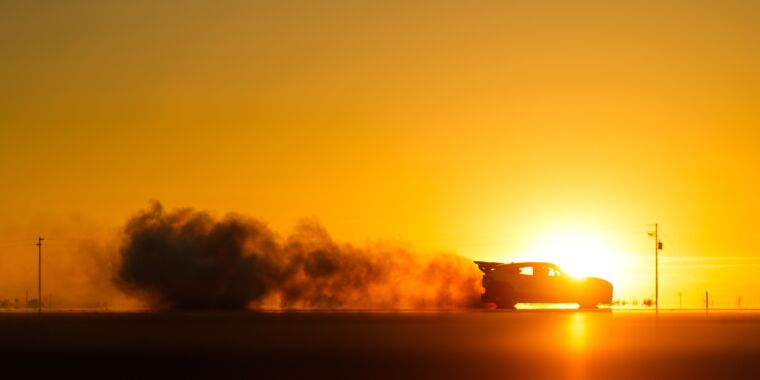 Two weeks ago, a video hit YouTube showing a very loud, very fast electric vehicle testing somewhere in North Carolina. Debate raged about whether this was actual spy footage or guerrilla marketing from Ford’s PR department, since the EV bore a lot of resemblance to the forthcoming Mustang Mach-E. That doubt was cleared up on Tuesday, when the Blue Oval revealed the one-off EV in question. It’s called the Mustang Mach-E 1400, and it’s utterly bonkers.

Readers with good memories might remember that back in April, we got news of a 1,400 horsepower electric Ford Mustang built for the drag strip. The Mustang Cobra Jet 1400 and the Mustang Mach-E 1400 have similar names, and both run on electricity. But there, the similarities end. The earlier car was built for the drag strip, but the Mustang Mach-E 1400 doesn’t just want to go fast in a straight line, as the multitude of carbon fiber wings and dive planes make quite clear.

The Mustang Mach-E 1400 was developed by Ford Performance and RTR, a customization shop owned by Vaughn Gittin Jr. that built Ken Block’s Hoonicorn Mustang, among other machines. Gittin Jr. is a professional drifter, and the Mustang Mach-E 1400 can definitely drift, going sideways and turning its tires to smoke with the best of them. But if you want to chase lap records or quarter-mile times instead, it’ll do that, too—it just requires a few suspension tweaks like changing to shorter control arms that allow for less extreme steering angles.

“Getting behind the wheel of this car has completely changed my perspective on what power and torque can be. This experience is like nothing you’ve ever imagined, except for maybe a magnetic roller coaster,” said Gittin Jr.

In this case, it’s a roller coaster propelled not by the force of gravity but by seven Yasa P400 R electric motors. Three of them are attached to the front differential, and the remaining four power the rear diff—each using just a single driveshaft. (Chevrolet used a similar approach in a much less extreme electric one-off built for SEMA in 2019.) At least, that’s the default configuration; Ford says that the Mach-E 1400 can also be operated in front- or rear-wheel drive modes as well as all-wheel drive.

The motors are fed by a 56.8kWh battery pack that uses a nickel-manganese-cobalt cell chemistry. As with other extremely high performance EVs, these are optimized for power density rather than energy density—it’s all about getting as much energy to the motors as quickly as possible, not eeking out an extra mile or two of range. But Ford has designed the pack to be cooled during charging so that down time between runs is kept to a minimum: according to our friend Bozi at Road and Track, a requirement was an hour of continuous use followed by an hour of high-speed charging, then another hour of continuous use.

Similarly, the Mustang Mach-E 1400’s exterior is all about going fast around corners, not going long distances between charges. Ford hasn’t revealed a drag coefficient, but with 2,300lbs of downforce at 160mph (1,043kg at 258km/h) you can expect it to be significantly greater than the production Mustang Mach-E.

“Now is the perfect time to leverage electric technology, learn from it, and apply it to our lineup. Mustang Mach-E is going to be fun to drive, just like every other Mustang before it, but Mustang Mach-E 1400 is completely insane, thanks to the efforts of Ford Performance and RTR,” said Ron Heiser, chief program engineer at Mustang Mach-E.

With any luck, we might even get to experience the insanity at some point; like the similarly insane Renault Espace F1, the Mustang Mach-E 1400 has room for three passengers inside its caged interior.