For the first time since 2008: German basketball players qualify for Olympic sport 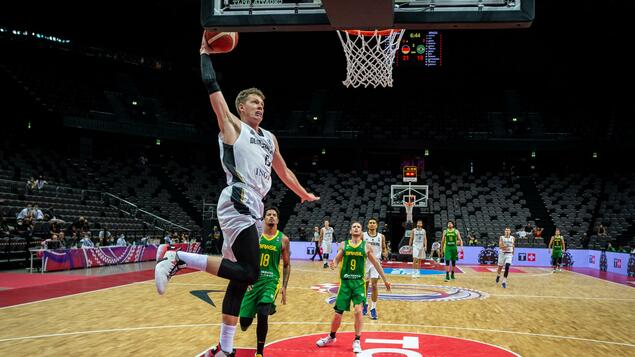 German basketball players fulfilled their Olympic dream with a lot of energy. National coach Henrik Rudel’s team won the playoffs final against Brazil on Sunday in Split with a time of 75:64 (36:34) and secured a ticket to Tokyo with lost NBA star Dennis Schroeder in the stands. The best German player against the mighty South American was NBA professional Moritz Wagner with 28 points. Most recently, the German Basketball Association in Beijing in 2008 along with star and flag bearer Dirk Nowitzki was selected for the Olympic Games.

Solvable tasks await the German team in Tokyo. In Group B, the DBB selection meets Australia, Nigeria, Serbia or Italy, who faced each other in the qualifying final in Belgrade on Sunday night. The preliminary round begins on 25 July with a duel against Serbia or Italy.

The German team had to dispense with Isaac Bunga at the Spaladium Arena. The NBA professional played in the semifinals against Croatia on Saturday and had to pass. Rödl built on experience for his five starts and brought in, among other things, Berlin Maodo Lo, who had outlasted the tournament host by 29 points the day before.

The DBB pick started well and scored the first two 3-pointers. Then the expected difficult battle developed against South Americans, who won all three of their matches in Split by more than 25 points. Both teams had to work hard at every point, and excelled defensively as expected. After Germany were late in the first quarter (14:17), the Olympic dream continued.

Especially when Germany came out of the third break and Wagner gave a strong signal with a choppy dive at 23:19 and forced the Brazilians to take a break. Then Germany advanced to eleven points (34:23). But in the final minutes of the second quarter, the Brazilians cut short again, so that everything was still open at the break (36:34).

But Germany was not deterred by the Brazilian race to catch up. The South Americans briefly took the lead, but then the German team led by Wagner pulled back a bit. Before the final section, the German national team was ahead by six points. Even in the last ten minutes it was a tough fight for every shot. Germany was able to pull back slowly, and with 67:56 less than three minutes to go, it was again comfortably ahead. In the final stage, Captain Robin Bunzing and Co. kept their nerve, the rest was just pure joy. (dpa)