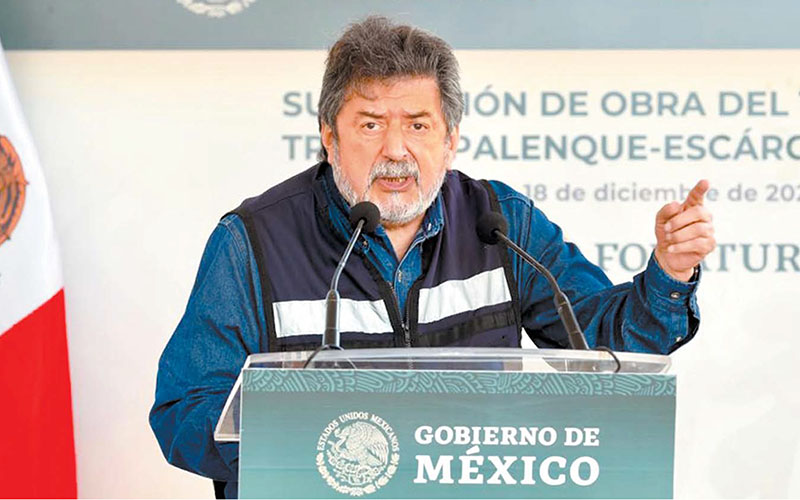 In an interview with Milenio, the official specified that some of the locations for these projects would be San Jose del Cabo and Loreto in Baja California Sur; Tulum and Cozumel in Quintana Roo; Palenque, Chiapas; Calcomol, Campeche; Ixtapa Zihuatanejo, in Guerrero and Huatulco in Oaxaca.

The Fonatur general manager explained that the energy that would be generated in the solar power plants in entities outside the southeast would also account for the Maya train, as it would be injected into the CFE system and would form part of the rail project.

Jimenez Pons noted that he has already spoken with the head of the Ministry of Communications and Transport (SCT), Jorge Arganes Diaz Lyall, that some of these solar stations are being built in some airports and ancillary services facilities (ASA).

The director said that one of the first ASA airports that will have one of these electrical complexes is Campeche, and it will also seek to utilize the Integrated Center Planned (CIP) land.

This construction plan is medium-term, so in 2021 it will start with three solar power plants in San Jose del Cabo and Baja California Sur, as well as in Tulum and Cozumel, Quintana Roo.

Jimenez Pons commented that a total of $ 187 million will be invested in building these projects, 20 per cent of which will be provided by Vonator with its own resources, while the remaining 80 per cent will be through financing from Nacional Financiera and Bancomext.

READ  4G is coming to the moon

He stated that the tenders for building solar power stations will be launched next September, with a judgment to be issued in October.

Jiménez Pons commented that the total generation will be 110 MW, but for the rail project, 200 would be needed, which is expected in 2022.

He emphasized that operating the electrical complexes would be within the competence of the Federal Electricity Authority (CFE), with which he would conclude the appropriate contract.

One of the benefits of the solar power plants that will be built is that they will not generate intermittency, as they will contain batteries so that the energy remains stable at night.

Regarding the Cozumel plant, he indicated that the profits made from generating electricity will be used in building a ferry, so that the island’s residents can cross to Cancun for free, where fees must be paid at the present time. Subsidized rate for private marine companies for transportation between the two destinations.

The head of Fonatur commented that the construction and operation of this ferry will be carried out by the Secretariat of the Navy (Semar), which is already planning this project.

Other beneficiaries of the profits from the solar power plants include the Ministry of Environment and the Ministry of Culture, along with resources for their various programs.

READ  Fans all over the world speak up

“What we do is invest, which is generating a good enough profit year after year for us to invest in land, urban equipment, treatment plants, and environmental programs,” he explained.

He reiterated that Mexico needs to generate power, but not under a special scheme, if not, profits remain in the region.

An increase of 900 million barrels per day to finish work

The Ministry of Communications and Transport (SCT) has allocated an additional 900 million pesos to build the double-track railway section of the Santa Fe Observatory section of the Toluca Valle de Mexico intercity passenger train, which will be allocated between March and July. 2021. The resources will be used for the construction of the section that starts at the exit of the tunnels on the Mexico-Toluca highway with a station in Santa Fe and a station in the Observatorio metro tunnel.

It will also be to assemble prefabricated items, to get to the Santa Fe station, such as: columns, capitals, capes or arcades, beams, pre-panels, sidewalks, skirts, sheet molding, as well as metal structures and precast sections, among others, to accomplish civil works For the tunnel exit to the observatory station.