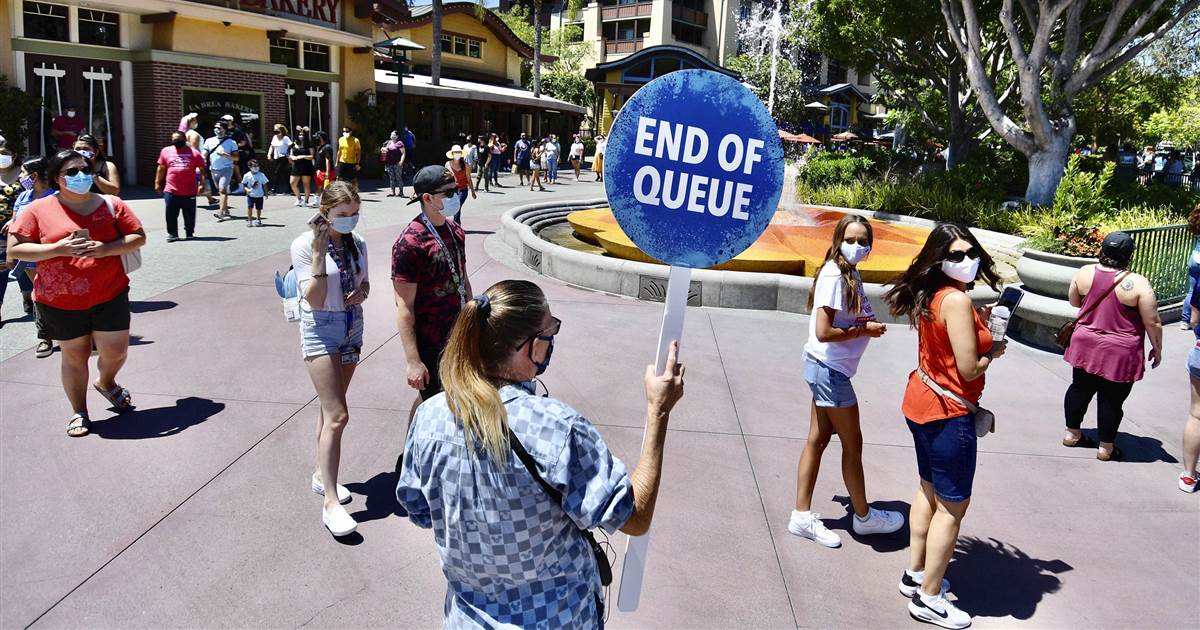 Mickey, Minnie and Goofy are going back to work Saturday as Disney World is pushing ahead with plans to reopen even as Florida continue to rack up a near-record number of new coronavirus cases.

Dr. Anne Rimoin, a professor of epidemiology at the UCLA Fielding School of Public Health, told Variety the reopening of Disney World is a “terrible idea.”

“There are several hospitals that are running out of beds in Florida, with health workers warning that there are not going to be enough ventilators and enough rooms, and cases in the state are breaking new records daily,” said Rimoin. “Moving forward with reopening, I think, is inviting disaster.”

Disney furloughed 100,000 theme park and hotel workers, including cast members who play the beloved Walt Disney characters in Florida and elsewhere, back in April.

The move to allow people to return to the Magic Kingdom comes as the nationwide daily death toll from COVID-19 appears to be on the rise again, grim new NBC News numbers showed Friday.

There were 1,021 new deaths reported across the country on Thursday, the most since June 30, according to the figures.

Florida, with 120, was one of the five states accounting for more than half of Thursday’s reported fatalities, an NBC News analysis revealed.

The other states reporting the most COVID-19 deaths were New Jersey with 142, California with 131, Texas with 111, and Arizona with 75. Also, 19 states have seen their two-week death totals increase by more than 20 percent in the last two weeks.

Let our news meet your inbox. The news and stories that matters, delivered weekday mornings.

Meanwhile, the U.S. appears to have set another unwanted record with more than 63,200 new cases of coronavirus on Thursday, Johns Hopkins University is reporting.

That dismal new figure is higher than 56,667 new cases that NBC News, which has been compiling its own list of new cases and deaths since the pandemic started, tallied Friday.

But all that awful arithmetic was yet another reminder that the plague that President Donald Trump just a week ago predicted would “just disappear” continues to spread fast, especially in states like Texas, Florida and Arizona which reopened early and are now paying a steep price.

“We are living in the perfect storm,” Dr. Anthony Fauci, director of the National Institute of Allergy and Infectious Diseases, said in a Financial Times interview published Friday.

“I think we have to realise that some states jumped ahead of themselves,” Fauci said. “Other states did it correctly. But the citizenry didn’t listen to the guidelines and they decided they were going to stay in bars and go to congregations of crowds and celebrations.”

“People seem to have forgotten that COVID is very much part of our present,” Lightfoot said.

BREAKING #12News has learned from 2 people with knowledge that Abrazo hospitals in Phoenix area have reached their morgue capacity, and Maricopa County is seeking refrigerated trailers for bodies. Developing…

Herd immunity has been championed by a number of Republican politicians who argue that coronavirus lockdowns have been too strict. But most scientists say there is little evidence that it works. And Sweden, a nation of 10 million where this has been the strategy, has experienced 5,500 deaths. Sweden now has 55 cases per 100,000 people compared to the U.S., which has 41 per 100,000 people, according to an NBC News calculation.

Meanwhile, Texas was bracing for more pain The Lone Star state has already racked-up 239,657 cases and a death toll of 3,102, according to NBC News’ numbers from Thursday.

“I gotta tell you, I think the numbers are going to look worse as we go into next week,” Texas Gov. Greg Abbott told KRIV-TV in Houston on Thursday.

Abbott, a Republican and Trump ally, has taken flak for reopening Texas for business as the number of coronavirus cases started to climb and for not insisting earlier that local authorities follow federal Centers for Disease Control and Prevention safety recommendations like wearing masks while in public places.

“We opened a government here in Texas, too quickly,” Lee told MSNBC’s Andrea Mitchell. “It was May 1st. We had not followed the CDC guidelines. Certainly we’re now working as a team. I appreciate what the state government is trying to do, Andrea, but we have 10,000 people in the hospital beds this week. We have people dying every day.”

Among the new Texas cases are two stand-up comedians, Bryan Callen and Brendan Schaub, who tested positive for COVID-19 after performing last month in a San Antonio club.

“We should probably let everybody know that Brendan and I did everything wrong in Texas,” Callen said on their podcast, The Fighter and the Kid. “We practiced no social distancing, got up in front of 350 people as they were laughing at us and shouting at us, and then when we got off stage — didn’t change mics.”