Finland: Hyundai with Tanak and Breen on the podium / WRC 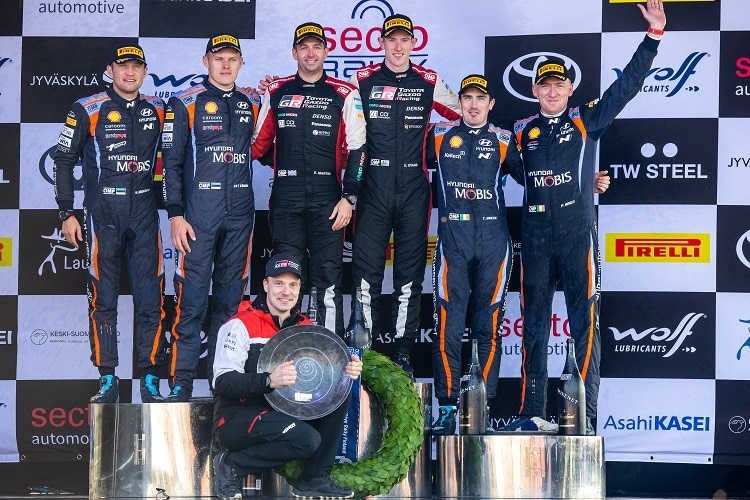 Best result yet for Hyundai Motorsport on the World Championship Tour in Scandinavia, Ott Tanak and Martin Yarvioga in the gravel rally finished second, and Craig Brin and Paul Nagley on the podium for the third time in a row.

Hyundai Motorsport finished off the podium with a two-car Hyundai i20 Coupe WRC in Rally Finland, round 10 of the FIA ​​World Rally Championship (WRC) in 2021. In a tough chase through Finnish forests, Ott Tanak and Craig Brin finished second and third. Hyundai Motorsport celebrated its first-ever podium in the famous gravel rally.

Ott Tänak and co-driver Martin Jarvioga were within easy reach of the overall victory over all three days of Rally Finland. The Estonians won a total of seven special stages and ended up just 14 seconds ahead of winners Elvin Evans/Scott Martin for their fourth podium finish of the season.

“For me it was the first time I had a Hyundai i20 Coupe WRC in a Finland Rally – and it was fantastic,” Tanak said. “We were able to fight for the best times of the day, and an overall victory was not out of reach. Next year we will try to be on top of the podium. Congratulations to Elvin (Evans) on the win.”

Craig Breen and fellow countryman Paul Nagle also took the podium at the event near Jyväskylä. The duo took the lead after the first day of racing, but fell behind Evans and Tank in the nine-stage special on Saturday. A final third place means the Irish have a third consecutive podium finish.

“I feel honored to be on the podium in this special rally and to have contributed to the success of the team,” said Brin. “I still can’t believe we had three podiums in a row. Of course we would have liked to fight for victory. We haven’t gotten that far yet, but it’s so much better than before. It was a really good weekend for us and I enjoyed every second.”

Thierry Neuville and co-driver Martin Wiedegui had a disappointing weekend for the 70th anniversary of Rally Finland. The duo had to end the rally on Saturday due to an engine failure in their Hyundai i20 Coupe WRC.

“We have always had a hard time here in Finland. But this time we were able to fight for victory until a short time before the end,” said team manager Andrea Adamo. “We owe that to the whole team. Our drivers, engineers and mechanics worked hard. I don’t think anyone was expecting us to end up on the podium with two cars and be so close to victory. We never stopped believing in our chance and this result is proof of that.”

In just two weeks, Hyundai Motorsport will take on the next challenge of the 2021 WRC season, the Rally of Spain, which will take place primarily on asphalt roads from October 14-17.