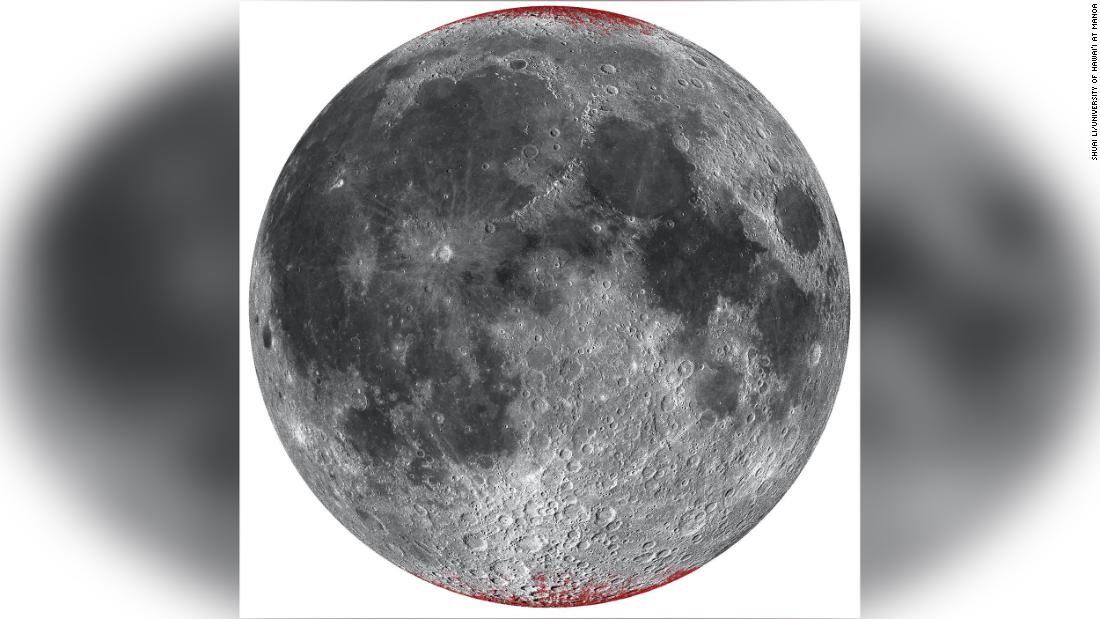 Scientists had the same reaction they might have done when they came to this conclusion. That shouldn’t be possible – after all, there is no oxygen on the moon, one of the two primary ingredients for rust formation, the other is water.

But the evidence was there.

The Indian lunar probe, Chandrayaan-1, orbited the moon in 2008, gathering data that has led to many discoveries over the years – including the detection of water particles on its surface. The probe also carried an instrument built by NASA that could analyze the mineral composition of the moon.

When researchers at NASA and the Hawaiian Institute of Geophysics and Planets recently analyzed the data, they were shocked to find hints of hematite, a form of iron oxide known as rust. There are a lot of iron-rich rocks on the moon – but rust is only produced when iron is exposed to oxygen and water.

“At first, I didn’t quite believe it,” said Abigail Freeman, a scientist at NASA’s Jet Propulsion Laboratory. “It shouldn’t exist based on conditions on the moon.” In a press release.

Not only is there no air on the moon, but it is flooded with hydrogen that flows from the sun, and is carried by the solar wind. Rust results when oxygen removes electrons from iron; Hydrogen does the opposite by adding electrons, which means it is very difficult to form rust on a hydrogen-rich moon.

“It’s very baffling,” said Shuai Li of the University of Hawaii, the lead author of the study, which was published on Wednesday in the journal. Science advances. “The moon is a terrible environment for hematite to form.”

After months of searching, Lee and NASA scientists believe they have broken it down – and the answer to the riddle lies on our planet.

Here is their theory

One of the main clues was that rust was more concentrated on the side of the moon that faces Earth – indicating that it is somehow connected to our planet.

The Earth is surrounded by a magnetic field, and the solar wind extends this bubble to form a long, downwind magnetic tail. The moon enters this tail three days before its fullest, and it takes six days to cross the tail and exit the other side.

During these six days, the Earth’s magnetic tail covers the surface of the Moon with electrons, and all sorts of strange things can happen. Dust particles may float on the surface of the moon from the earth, and moon dust may fly away in a dust storm, According to NASA.

Lee speculated that oxygen from Earth is traveling on this magnetic tail to land on the moon, where it interacts with water molecules on the moon’s surface to form rust.

The magnetic tail also blocks nearly all the solar winds during a full moon – meaning the moon is temporarily shielded from an explosion of hydrogen, which opens a window for rust formation.

“Our hypothesis is that lunar hematite is formed through oxidation of the moon’s surface iron by oxygen from the Earth’s upper atmosphere which has been continuously blown to the surface of the moon by the solar wind when the moon has been in the Earth’s magnetic tail over several billion years past,” he told me in Press release From the University of Hawaii.

“This discovery will reshape our knowledge of the polar regions of the moon,” he added. “The Earth may have played an important role in the evolution of the moon’s surface.”

This theory could also explain why rust has been found in other air-free bodies such as asteroids. “It may be because small parts of water and the impact of dust particles allow the iron in these bodies to rust,” Freeman said.

But some questions remain unanswered – for example, although most of the rust has been found on the near side of the moon, some small traces have also been discovered on its far side, as oxygen on Earth should not be able to reach it. It also remains unclear how exactly the water on the moon interacts with rocks.

To gather more data for these unresolved puzzles, NASA is building a new version of the instrument that has collected all of this existing data about the moon’s mineral composition. One of these features, NASA’s statement said, would be able to map water ice over the moon’s craters – and it might be able to reveal new details about hematite as well.