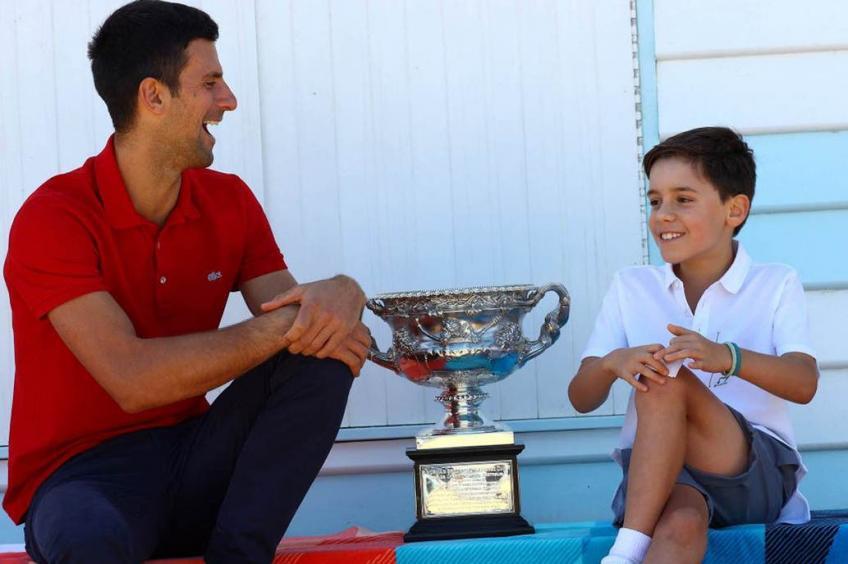 After winning his 18th Grand Slam title in what is now his “home”, a 10-year-old Serbian boy interviewed world number one Novak Djokovic for the official Australian Open website.

The freshness of both made the moment unforgettable. The meeting between the two came after a photo shoot taken by the Belgrade tennis player on Melbourne’s picturesque Brighton Beach, known for the color of wooden boxes.

The ease of boy Andrea Mihajlovic, who had the best tennis player in the world by his side and won a nine Australian Open, allowed him to share and tell about aspects of his private life that he rarely exhibits.

Among other things, he shared one of the secrets of concentration during a game: “Focus on the breath. We breathe all the time, but we never think about it. If you think about it and focus, you can improve how you work, and this is one of the easiest tricks to use when it comes to Focus on something.

Novak also spoke about his family. “I have two wonderful children, Stephan, six, and Tara, three. I spend most of the time with them.”

Regarding the other sports he loves besides tennis, the Serbian said: “I love other sports. When I was a kid I spent a lot of time in the mountains, I used to ski a lot.

It’s a great sport, it feels great to get off the mountain, maybe my favorite sport after tennis, then all the sports come with ball, soccer, basketball, and handball.

I also love golf. The letter made Nol himself ask Andrea about his personal tastes, and the boy did not hesitate: he decided to do snow sports like skiing and snowboarding. The interaction was wider when it came to food.

Djokovic chose the fruit as his main weakness, with mangoes occupying first. After pointing out that Mickey and Minnie are her favorite Disney characters, he has no hesitation in pointing out who he would like to share a celebrity dinner with.

“With Michael Jordan!” He immediately said, expressing his admiration for the former NBA star and Chicago Bulls player. The speech lasted just over four minutes, and Andreja stunned the world’s number one when he finally asked him: “Who would you like to share dinner with, and with which celebrities?” The boy replied that he had never thought about it and then Djokovic suggested, “Well, what do you think about having dinner together here in Australia next year?” And they sealed the deal in one fell swoop, in an epidemic fashion.