Croatia. A year of intense diplomacy 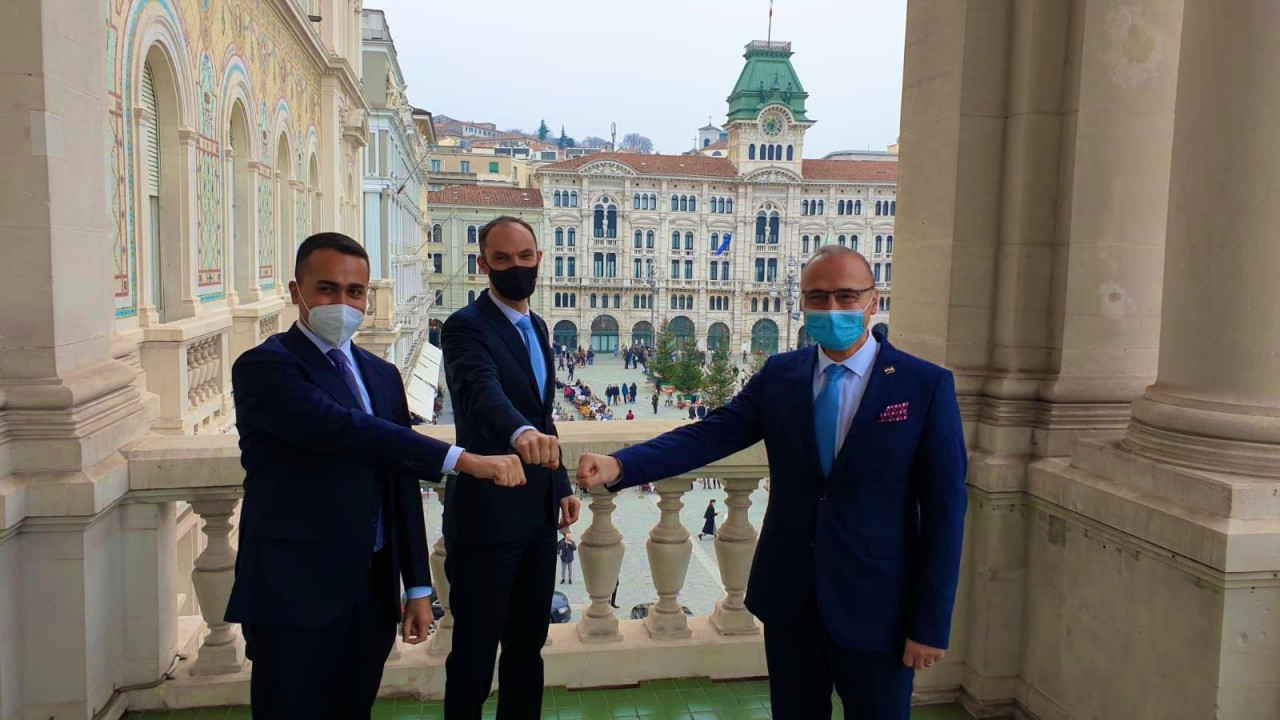 The abolition of travel visas to the United States, the visit of French President Emmanuel Macron to Zagreb, the fulfillment of the criteria for joining the Schengen area, as well as the diplomatic attack aimed at resolving the crisis afflicting Bosnia and Herzegovina. According to Ivan Saravania (Hina), these are the events that marked Croatian foreign policy during 2021.
United States of America
A year that will be remembered worldwide due to the travel restrictions imposed by the Covid-19 pandemic: Croatian citizens will be remembered to simplify their entry into the USA. Since last October 23, in fact, the state authorities have not required Croatian citizens who want to visit their country to obtain a visa, either for tourism or for work. Croatia achieved the desired goal after meeting strict US security and legal standards. The last hurdle was overcome when official statistics showed that within a year the number of entry visits in which Croatian citizens were refused entry was less than 3% of the applications they were notified. On the subject of bilateral relations between Zagreb and Washington, the Minister of Foreign Affairs and Europe, Jordan Grelic-Radmann, emphasized that even negotiations aimed at abolishing double taxation have now reached an advanced stage.
Schengen
Returning to the continental level, very positive news came to Croatia and its citizens earlier this month, when confirmation arrived that the country fulfills the requirements to join the European borderless movement area (Schengen area). However, before it can claim victory, Croatia (the European country that oversees the longest extension of the EU’s external borders) will have to wait to hear a (non-binding) opinion from the European Parliament and above all get permission from each of the states already included in the Schengen area. Prime Minister Andrej Plenkovi is convinced that 2022 will be the year of the last green light for Croatia’s accession.
France
The fact that on 1 January France will assume the rotating presidency of the European Union from Slovenia will lead to the realization of Zagreb’s aspirations. It is noteworthy that the Elysee had expressed last November its ruling that Croatia is ready to join the Schengen area. The French president is undoubtedly the most influential international head of state to visit Croatia this year. Emmanuel Macron, the first French president to visit Croatia since the declaration of independence, also arrived in Zagreb in order to sign a contract for the sale of a flock of 12 Rafale F3R aircraft with the aim of modernizing the Croatian Air Force – Anti-Aircraft Defense / HRZ-PZO (fighters produced by Dassault Aviation). It will replace the Mig 21 bis currently provided by Croatia Airlines in the coming years). During his stay in Croatia, Macron praised the country, expressing support for its inclusion in the Schengen area, stressing that Zagreb has implemented the necessary reforms to make it welcome in the eurozone as well. In Zagreb, Macron and Plenkovic also signed a declaration sealing the strategic partnership between their countries, thus strengthening their cooperation in a wide range of sectors.

PNRR . number
Last July, the President of the European Commission, German Ursula von der Leyen, arrived in Zagreb, who during her stay confirmed the positive opinion she obtained in Brussels through the National Recovery and Resilience Plan (PNRR) presented by Banski dvori. It must be remembered that the Croatian PNRR anticipates projects with a total value of 47.5 billion kuna. The amount, which is comparable to the size of its population and the size of its economy, puts the country at the forefront of the beneficiary of the mechanism launched at EU level to help member states overcome the difficulties caused by the crisis caused by the health emergency.

Slovenia
During 2021, Croatian political leaders have repeatedly noted the excellent performance of bilateral relations with Slovenia. Prime Minister Andrei Plenkovic described relations between the two countries as good as ever. He also mentioned that thanks to the dialogue held between its CEO and the government headed by his Slovenian counterpart Janez Janša, the two countries have entered a phase in which problems are gradually being overcome. The Croatian-Slovenian friendship was also sealed last October when Presidents Borut Pahor and Zoran Milanovic inaugurated on the same day the Frank Precern Monument in Zagreb and Lijudevit Jaj One in Ljubljana.
exclusive economic zone
In 2021, after years of delays, last February Sabor declared Croatia’s exclusive economic zone in the Adriatic. This project was agreed with Italy in which Rome and Zagreb also wanted to include Ljubljana, although from the point of view of international law they were not required to do so. By declaring its exclusive economic zone, Zagreb also gained the right to build artificial islands in the Adriatic as well as greater freedom to exploit the energy of the sea, in addition to rights it had already contested under the declaration. Fishing area exclusive air and sea currents. Presenting the project, Rome, Zagreb and Ljubljana repeatedly stated that one of the main goals of this initiative is to ensure the joint protection of the Adriatic Sea.
the black Mountain
One of the most sensitive was, undoubtedly, the visit of the President of Montenegro, Milo Dukanovic, who last July, on the occasion of his stay in Zagreb, expressed a strong rebuke and compared it to the concept of the “Serbian world” promoted by Belgrade. to the doctrine of “Greater Serbia”. On that occasion, the Croatian President, Zoran Milanovic, raised doubts about Serbia’s sincere intention to join the European Union.

Serbia
The rhetoric associated with the notion of a “Serbian world” raised some tensions between Zagreb and Belgrade during 2021. MP Milorad Popovac (SDSS) elected Patience to one of the three guaranteed seats of the Serbian minority which contributed to a softening of the tone, urged his countrymen to respect Croatian laws, and urged them to ignore the call Serbian President, Aleksandar Vucic to raise the Serbian flag on September 15, marking the new Serbian holiday (Day of Serbian Unity, Freedom and National Flag). Belgrade also criticized Croatia for its commitment to the peace mission in Kosovo, with Serbian Defense Minister Aleksandar Vulin accusing Croats of being Kosovar brothers in arms, prompting a bitter reaction from Croatian diplomacy.
The situation in Bosnia and Herzegovina
On the occasion of bilateral meetings with their foreign interlocutors, Croatian politicians have never missed an opportunity to analyze the direction of the situation on the chessboard formed by Southeast Europe, in particular with regard to the development of the situation in Bosnia and Herzegovina. Apart from some intermittent back-and-forth, the Croatian institutional leadership is coherent in asserting that the unity of Bosnia and Herzegovina must be preserved on the basis laid by the Dayton Accords, i.e. ensuring the unity of the country based on the principle of equality among the three constituent peoples (Bosniaks, Croats and Serbs). Prime Minister Plenkovic went so far as to assert that Bosnia and Herzegovina cannot count on a “bigger friend than Croatia”.
Elections are scheduled for next year in Bosnia and Herzegovina, and Zagreb launched a diplomatic offensive in order to urge Sarajevo to change the electoral law, so as not to punish Bosnian citizens with Croatian citizenship. In other words, Croatia wants to avoid repeating a scenario that has often been repeated in the past, when Croatian representatives in key state-level political institutions were not rarely elected by Bosniak votes. Regarding the survival of Bosnia and Herzegovina, another element of instability is the claims of Milorad Dodig, the Serbian representative in the country’s tripartite presidency, who in some ways, in reference to legal reform, is instigating the secession of the Serbian Republic.
Last March, Grlić-Radman presented to his European counterparts a “non-paper” aimed at affirming the concept that Bosnia and Herzegovina should remain united and develop the principle of equality among its three constituent peoples (Bosnias, Croats and Serbs). It is an approach supported by Slovenia, Hungary, Bulgaria, Greece and Cyprus. However, tensions did increase already in the following month after a second “non-paper” appeared – whose authorship was attributed by part of the press to Slovenian Prime Minister Janez Janša, who dismissed the thesis with contempt – where it was conceivable that a revision of the borders in the Balkans, Starting with the subdivision of Bosnia and Herzegovina according to an ethnic criterion. A design that President Milanovic called “a great whore…”.

See also  In Congress, the perfect storm that could bring down Biden and the USA - La Voce di New York

We inform our good readers that, subject to the provisions of Article 94 of the Electronic Media Law adopted by the Croatian Sabor (GU / NN 111/21), it is possible to comment on articles published on the portal and on social networking sites. La Voce’s profiles are temporarily suspended. hr.