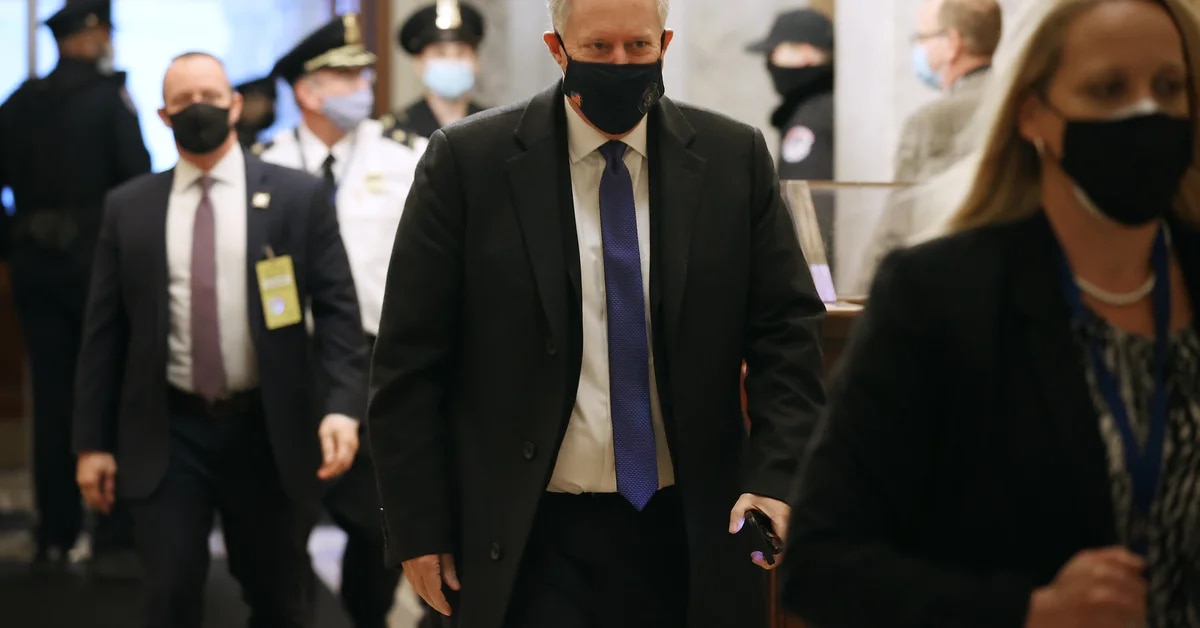 FEBRUARY 9, 2021 – WASHINGTON, DC, US: WASHINGTON, DC – FEBRUARY 9: Former White House Chief of Staff Mark Meadows (center) arrives at the Capitol on the first day of former President Donald Trump’s second trial in the Senate. On February 09, 2021 in Washington, DC. Seventeen Republicans will need to join all 50 Democrats to convict Trump of the charge he faces, of inciting rebellion. (Chip Somodevilla / CNP / Polaris)

The US House of Representatives committee, which is responsible for investigating the attack on the Capitol on January 6, revealed several text messages on Monday between former President Donald Trump’s former chief of staff, Mark Meadows, and a number of senior officials. Among them is Trump’s son, Donald Trump Jr, who urged him to pressure the former president to condemn the unrest.

These messages, as indicated by a number of members of the committee, are not covered by any powers related to professional secrecy, as Meadows agreed to cooperate with the investigation by handing over about 9,000 documents, according to the American newspaper “New York Times”.

It was clarified during the hearing that there were several messages during the night of the attack on the Capitol between Meadows and a number of lawyers, some Fox News personalities and even Trump’s eldest son, in which it was made clear the need to stop the siege: to condemn this as quickly as possible. A tweet from the Capitol Police isn’t enough.”

“These texts left no doubts. The White House knew exactly what was going on at the Capitol. One of the messages Meadows received said, ‘We’re under siege in the Capitol,'” said Liz, the Republican Party representative in Wyoming. Cheney, picked up CNN. Cheney detailed every letter the committee obtained on Monday.

On the other hand, the commission unanimously approved – nine votes in favor and zero against – the recommendation on the contempt indictment against Meadows, which did not appear in affidavits a week after his lawyer announced he would stop cooperating.

The House of Representatives is expected to vote, on Tuesday, to refer these charges to the Department of Justice, which will decide whether to prosecute the former Republican congressman, according to ABC News.

This Sunday, emails also surfaced detailing actions that Meadows could have coordinated to assist Trump in his desperate attempts to reverse the outcome of the presidential election, as well as numerous contacts between some members of Congress and former protest organizers. for riots.

“Mr. Meadows sent an email to an unknown person about the events of January 6” in which he asserted that “the National Guard will be present” to protect pro-Trump people “and that more will be available now. Wait,” the commission’s final report said.

The panel is seeking to find out the extent to which Trump was involved in the conversations to manage the response of the National Guard, which has been criticized for taking several hours to act despite the apparent violent incidents raging at the gates of the Capitol, including assaults on the policemen guarding the building.