Biden bullies. A strange way for the new US administration to restore relations with China after the Trump era (by A. Puccio) 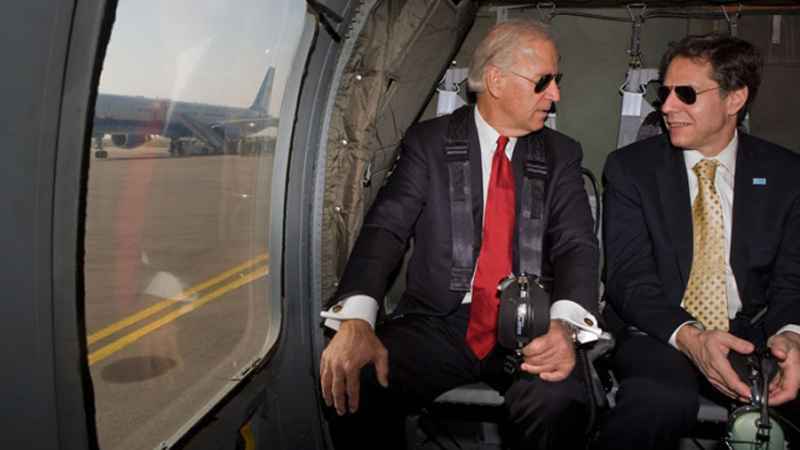 The US muscular, if not bullying, position was marked by the two-way summit between China and the United States in Alaska in Anchorage to discuss the political and economic situation between the two countries after Donald Trump launched a real economic war in recent years. Between the two peoples.
However, talks began in full swing, as the United States appeared at the meeting not in an attempt to settle differences but to emphasize that it is the United States, and thus it has every right to decide which economic policies will be imposed. To the world, including China.

Foreign Minister Anthony Blinken (pictured with Biden in a military helicopter) has expressed his country’s concerns about measures China will take, particularly as he focused on the Xinjiang issue where, according to Washington, Beijing is carrying out a real genocide. Against the Uyghur Muslims.
Blinken told CPC chief diplomat Yang Jiechi and Foreign Minister Wang Yi that China’s actions “threaten the rules-based order that maintains global stability,” announcing plans to discuss Hong Kong and Taiwan issues. Cyber ​​attacks on the United States and “economic coercion” against US allies.
Jake Sullivan, the Biden administration’s national security advisor, added that the United States does not want a conflict with China, and does welcome intense competition, but it will always be willing “to defend our principles for the sake of our people and for the sake of our friends.”

China’s response was not long. In fact, Yang, the party’s high representative, accused the United States of using its military might and financial supremacy to destabilize and put pressure on non-aligned countries by threatening the entire future of international trade.
Yang added that Xinjiang, Hong Kong and Taiwan are all inseparable parts from China’s territory, and China firmly opposes US interference in its internal affairs.
The Chinese diplomat went on to say that China is not seeking any confrontation with the United States but simply asking for mutual respect. “The way we see the relationship with the United States is as President Xi Jinping has already described it, that is, we hope we don’t see any confrontation or any conflict, we just want mutual respect and win-win cooperation.”

Today, the second round of talks will take place, but no one expects anything tangible from the summit between the two powers. Two days after Joe Biden declared that Vladimir Putin was a murderer, it is clear how the new tenant of the White House intends to move in foreign policy in the coming years. Biden’s policy appears to follow Trump’s policy. It may also appear more aggressive than his predecessor’s policy, on the thorniest issues such as relations between the United States, Russia and China.
It does not appear, at least from its opening words, that the White House intends to settle differences with China and Russia. Certainly, moves to identify a murderous president do not subside, or to come to a meeting and start discussion by putting the issues that divide the two countries on the plate. In short, it is clear that there is no desire on the American side to cooperate except to impose their own positions, for the sake of peace for those who believed that a new president in the United States, especially because he was a Democrat, would change. Something in international relations.