Armenia and Azerbaijan declare martial law and move over the enclave 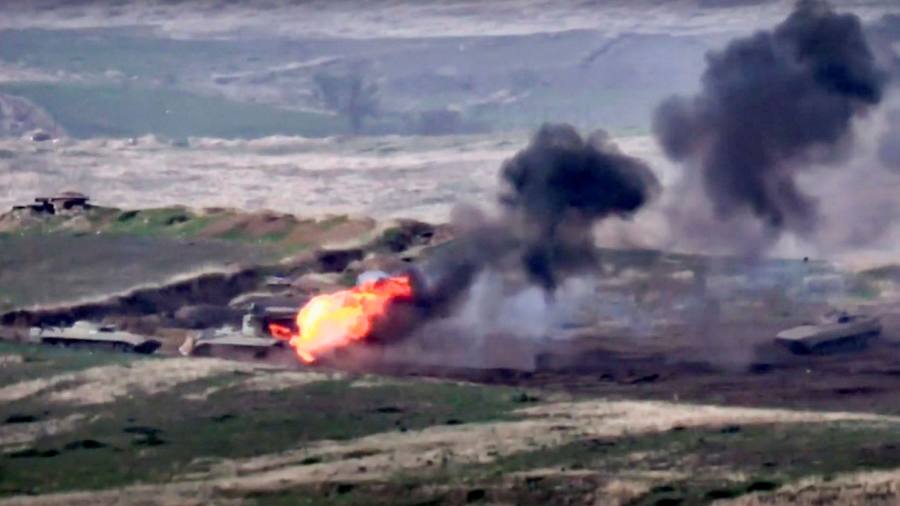 Armenia and Azerbaijan declared martial law and mobilized their armed forces after an escalation in clashes around the disputed Nagorno Karabakh region, killing many people on Sunday.

Both sides blamed each other for starting the fighting in the Caucasus Mountains, the latest outbreak in decades-old conflict and the worst since the five-day war in 2016 in which more than 100 people were killed.

The region is an important corridor for European energy supplies through a pipeline that runs through Turkey, which considers itself a “sister country” of Azerbaijan. Russia, the main mediator, has a joint defense agreement with Armenia and a military base in the country.

Nikol Pashinyan, Prime Minister of Armenia, said in a speech to the nation that Azerbaijan “declared war on the entire Armenian people again” and said, “The situation could cross the borders of the region and threaten international peace and stability.”

Azerbaijani President Ilham Aliyev said in a televised address to the nation on Sunday that the fighting “represents a serious blow to the peace process,” according to Interfax. He said, “Azerbaijan Karabakh.” “The enemy tried to provoke us again today, and announced that our opponents will receive the punishment they deserve.”

The Armenian Ministry of Defense said it shot down four Azerbaijani helicopters, hit 10 tanks and 15 drones, in response to an air attack in Nagorno Karabakh. The Armenian-backed government of Nagorno-Karabakh said 16 soldiers were killed and more than 100 wounded, and blamed Azerbaijan for bombing the region. It added that two civilians were killed during the bombing and 30 others were wounded.

Azerbaijan, which said 19 of its civilians were in the hospital, claimed it had recaptured several villages it lost in the war in 1993, although Armenia denied this.

The Azerbaijani Ministry of Defense said that it is taking “retaliatory measures” to protect civilians from “large-scale provocations” by Armenia in civilian areas near Nagorno Karabakh that caused “serious” damage to the infrastructure. It claimed to have destroyed 12 Armenian anti-aircraft systems, while one Azerbaijani helicopter was lost.

The European Union has called for an immediate ceasefire and an “urgent” return to international negotiations to settle the long-running conflict, one of the bloodiest to have resulted from the collapse of the Soviet Union.

The flare is angering Ankara and Moscow on the two opposing sides in another conflict even as they established close cooperation in defense, energy and trade. The two countries that share suspicion in the West have a complex relationship that binds them together over the civil wars in Syria and Libya despite the support of the competing parties in both countries.

Vladimir Putin, the Russian President, told Mr. Pashinyan that Russia was “extremely concerned” about the clashes and urged both sides “to take all necessary steps to prevent the escalation of the conflict, and most importantly – to cease hostilities.”

Turkish President Recep Tayyip Erdogan called on the Armenians to take a stand against the leaders of the country, who he said were using the nation’s people “like puppets” and “dragging them into disaster.” He added in a tweet on Twitter: “The Turkish nation, as usual, stands with its Azerbaijani brothers and sisters in all possible ways.”

Nagorno-Karabakh, an ethnic Armenian region with a population of less than 150,000, is located within the borders of Azerbaijan, but it separated during the days of the Soviet Union’s death and ran its affairs with political and military support from Yerevan.

The war began in the early 1990s when Christians of Armenian descent in Nagorno Karabakh fought the control of Muslim Azerbaijan, claiming thousands of lives before a ceasefire was signed in 1994.

Despite the mediation of Western powers and Russia, Armenia and Azerbaijan were unable to reach a complete peace settlement and regularly renew skirmishes along the front line. At least 20 people were killed in clashes in July, 300 km north of the pocket.

Tensions escalated last week when Mr. Aliyev claimed that Armenian forces were gathering along the line of contact in preparation for war. Armenia accused Mr. Aliyev of fabricating the prosecution as a pretext to start military operations.

The attack was coming. “After the recent clashes, there were numerous signals,” Olesia Vartanyan, a regional affairs analyst at the International Crisis Group, wrote on Twitter, all of them seeing and doing nothing for weeks. “A preemptive international mediation was needed. Many found reasons to agree to this attack. If they remain silent now, expect a real war.”