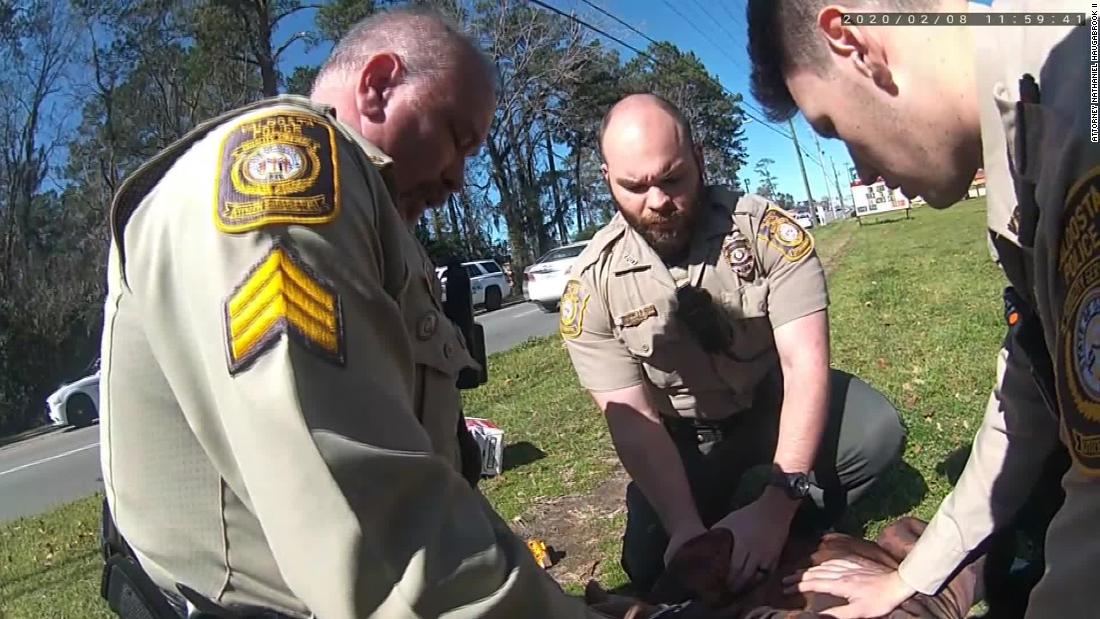 In a lawsuit filed Friday in federal court, Valdoste resident Antonio Arnelo Smith also accused the police department of illegal arrest, false imprisonment, assault as well as batteries and is seeking a $ 700,000 settlement.

A copy of the lawsuit was handed to the city attorney on Monday, and “the city did not have time to review the document and therefore cannot comment on the content of the lawsuit,” a VPD statement issued the same day said.

An updated comment has not been released by the city’s attorney since Thursday afternoon. Ashlyn Johnson, a spokeswoman for the city of Valdosta, told CNN she expects a new statement to be released Thursday night.

The VPD issued a five-minute video of the incident order from Sergeant Bill Wheeler. Nathaniel Haugabrook II, a lawyer representing Smith, sent CNN an 11-minute video from the body of Officer Dominic Henry.

“You broke my wrist”

Haugabrook said on CNN on Thursday that the Feb. 8 incident began when a Walgreens employee in North Ashley called 911 because a man was looking for customers for money at the location.

Haugabrook said that after one officer approached the man in question, another customer told a separate officer that the man who was harassing them was walking down the street.

Haugabrook said his client was down the street when Henry approached him and asked for his identification. Smith bowed to the officer and handed him his ID.

In Henry’s videos of the body provided to CNN by Haugabrook, Smith is seen talking to an officer, telling him that he was a Western Alliance sister because of his sister and that they know him.

He tells the police officer that he did nothing and to call his sister in Florida to confirm his story.

The video shows another officer, identified by Haugabrook as Wheeler, Wheeler, his badge also visible in the video, approached behind Smith and placed him in a bear hug.

Smith asks “What are you doing?” and Wheeler says, “Listen to him and put your hands behind your back,” before knocking him to the ground, he rises to him and embraces him.

“I don’t think anyone can listen to his crying and howling agony in which their heart doesn’t fail,” Haugabrook said of the recording.

While he’s on the ground, Smith is heard shouting, “Oh, my God! You broke my wrist,” before one officer says, “Stop,” and “It could break.”

Smith continues to cry and cry, saying, “Oh Jesus, it hurts,” over and over before the officers take off one of the cuffs.

“This is the second guy. The guy with the warrant is there,” Henry tells the other three and points down the road.

Henry then discusses the misunderstanding with Wheeler by saying, “I thought I missed something.”

“I thought he was the one with the warrant,” Wheeler says before leaving.

Henry then heard him speak under his breath “to hell,” before another officer at the scene asked him what had happened.

Henry then said when Wheeler told him to put his hands behind his back that he “thought he had missed something.”

Officers appear to be returning Smith’s ID and releasing him. One officer asks him if he wants to see an ambulance and he says no. The officer begs him to hang out for a moment, and Smith holds his hand, the video shows.

Haugabrook told CNN that his client refused medical help at the scene because he was scared and wanted to go home after the incident.

Later that evening Smith went to the hospital where they confirmed that his wrist was broken, Haugabrook said.

The transmitted information has been misinterpreted

A statement from Valdosta Police posted on Facebook says “VPD shipped to Walgreens at 2815 North Ashley in relation to a report by a man outside the company harassing customers, screaming loudly and asking customers for money. The topic was reported to be an African American man wearing a brown hoodie and blue pants. ”The statement suggests that two officers began an independent search of the site and found two different men matching the description, and for one who turned out not to be the man for whom the 911 call was made, there is a criminal warrant. The other, which was the subject of 911 calls, was not, but the information passed on to the police belt was misinterpreted.

See also  John Wall is back on Earth, opening the NBA pre-season in empty yards

CNN contacted the International Union of Police Associations to comment on the incident, but the organization has not yet responded.

“We stopped the right person, it’s just unfortunate that in communication, when you get more employees on the same call, there are some wrong communications during radio traffic. And these are things that yes, we can work on as an agency, and we work on further training our officer for better and better communication skills.But again, we had a stopped real guy who caused a problem in Walgreens, it’s just unfortunate that he wasn’t the one with the criminal warrant, “Valdosta Police Chief Leslie Manahan told CNN’s WALB branch.

The police administration said that although it did not receive any complaints filed after the incident, the shift supervisor was nonetheless notified, requiring the review process to be overseen by the officer’s supervisor, patrol commander, home affairs department and police chief.

“It is unfortunately a terrible situation, but on behalf of the Valdosta police administration and our officers, there were absolutely no malicious intentions,” Manahan said.

Haugabrook tells CNN that there was no reason for that level of force to be used by anyone because the charges and warrants for the other man were misdemeanor. In addition, he said his client was not combatant and that he simply spoke to an officer when the incident occurred.

Haugabrook also said he believes officers were forced to lie in their reports to cover up Wheeler’s actions.

“We believe they fabricated their reports,” Haugabrook said, adding that he believes the officers committed “conspiracy and collusion to create a false report to justify what Sgt. Wheeler ordered,” because he is their supervisor.

CNN was unable to contact the officers or sergeants involved in the incident.