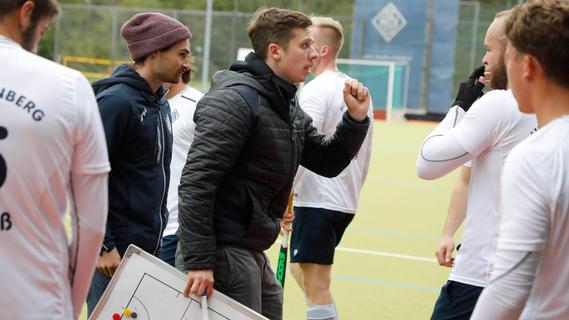 The Nuremberg hockey competition was great. Red or blue, NHTC or HGN – that’s always been a statement. But now, HGN coach Niklas Raum takes charge of the men’s team from the Siedlerstraße competition. why?

Niklas Raum has already encountered a lot with HG Nürnberg over the past two decades. He learned to play hockey at Buchenbühler Wald, grew up there and at one point also became a coach. In the meantime, he also works as a full-time trainer at HGN, jointly with Claudia Mack, taking care of women and only responsible for men in the second division.

Despite being only 26 years old, Niklas Raum has already seen and experienced a lot in German hockey. But last weekend he was able to try something new again. Something you wouldn’t necessarily expect from an instructor at HGN. He coached a team from Nuremberg HTC. The great competitor.

At 5:19 against Mannheimer HC, Niklas Raum was in charge of the men from Seidler Street for the first time – and he’ll be taking charge more often in the next few weeks. Benjamin Howarth, the new head coach for NHTC, takes care of the US national team as an assistant coach in the winter, which is why the First Division club reminds you that you have a great talent in your city.

Some time ago, Captain and Section Chief Frederick Wolf made contact with Raum, who dared to take on the task of bridging the gap, as he calls it. “Of course I told everyone that HGN was the employer with whom they had a contract,” explains Raum, who openly admits that the competition was “taken differently” by the competition.

He got the “approval relatively quickly and relatively benevolently” from the “officials”, “they certainly support the fact that we care about the cohesion of Nuremberg.” For Niklas Raum, NHTC has long been no longer a competitor, which is why he sees his support as a “statement against excessive competition” in the city, “the relationship must become more collective than opposition, because we are no longer good.”

“Of course some frown.”

However, he does not hide the fact that there have been people at HGN who find it inferior when a young man, who also represents his club in public, suddenly trains a competitor. “Of course, some people frown, but you have to be able to live with that,” Raum says.

With a temporary job at NHTC, Niklas Raum taking care of three teams in this inner circle, it’s going to be a stressful time, but he’s looking forward to it. At NHTC, he is supported by Henry Schneider, who until recently was in charge of women – and who really wanted to take it easy. With the women of HGN, he can now count on Claudia Mack.

“When it comes to preparations for the game, of course it takes a lot of work, and the exercises during the week should not be underestimated,” says Raum, “but after we train in the same halls one by one, you can stay an hour long.”

The focus now and in the future will be on HGN. Fortunately, the schedule wants the two men’s teams’ matches to not overlap. But Niklas Raum won’t be seen soon in red NHTC track pants. “So, my heart is very blue,” he says.

More sports in the area

You can find more exciting stories and information from local sports in the area on the Local Sports page. You can find news and stories from football enthusiasts here.