Afghanistan, the bridge with the US continues in Sigonella: Another 550 refugees have arrived 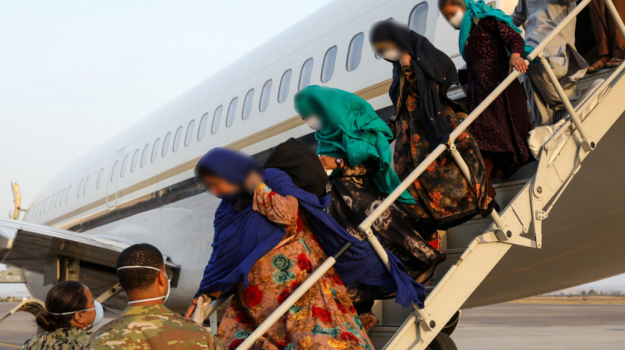 The air bridge between Afghanistan and Sigonella military base continues, Where were they moved today? Another 550 people arrived in Sicily via Qatar as part of Operation Refuge Allied.. , with the destination Philadelphia and a stop in the Washington DC area at the moment, guests of the structure which is the Italian military aviation, there are about 3,000 people including US citizens, visa applicants, special immigrant visa and other Afghans at risk. They are housed in the homes of the Sigonella NAS and in warehouses.

The data was disclosed during a press meeting attended by Kim Krhonik, Minister Counselor for Political Affairs at the US Embassy in Rome, and Admiral Scott Gray, US Navy Commander for Europe and Central Africa, and Commander of NAZ. Sigonella, Kevin Pickard, Howard Lee Rivera, captain of Italy’s Sigonella Airport. Working in partnership with its allies in the Italian Air Force and the Italian government, Nas Sigonella serves as a transit point for the displaced prior to their subsequent journey to the United States and other locations.

Tents for prayer and also for medical visits and socializing. But also in the grass where kids can run chasing the inevitable ball with an American soldier. NAS Sigonella welcomes people from Afghanistan, on their first stop in Qatar, ready to go to the USA, dreaming of America.

4000 arrived and more will reach Sicily, An agreement between Italy and the United States stipulates that no more than 14 days remain. Among them are also two unaccompanied minors, aged 14-16: there is a list of priorities for them that, once in the United States, will be taken care of by the sector departments. All arrivals were subjected to an anti-Covid examination, and there were positive cases that were immediately isolated and treated in accordance with Italian law.

See also  New relations between the United States and Europe

“It is a large operation that requires a large apparatus that works very well – comments Howard Lee Rivera, commander of the Italian Air Force airport in Sigonella – we have the appropriate logistical structure because the base is suitable to accommodate such a high number of people. “We would like not to let them leave – says Rear Admiral Scott Gray, Commander of the US Navy, Europe, Africa and Central Region – this operation was an emotionally wonderful and very beautiful experience. Seeing happiness in the eyes of children is very satisfying.”

“I could not be more proud of my men – says the ship’s captain Kevin Pickard, captain of the Sigonella NAS – it was an important solidarity effort not only by the military, but also by families, associations and civilians who gave us the help needed for them. There were some children who arrived in tattered clothes, without shoes and in precarious sanitary conditions: they needed everything useful to survive ».