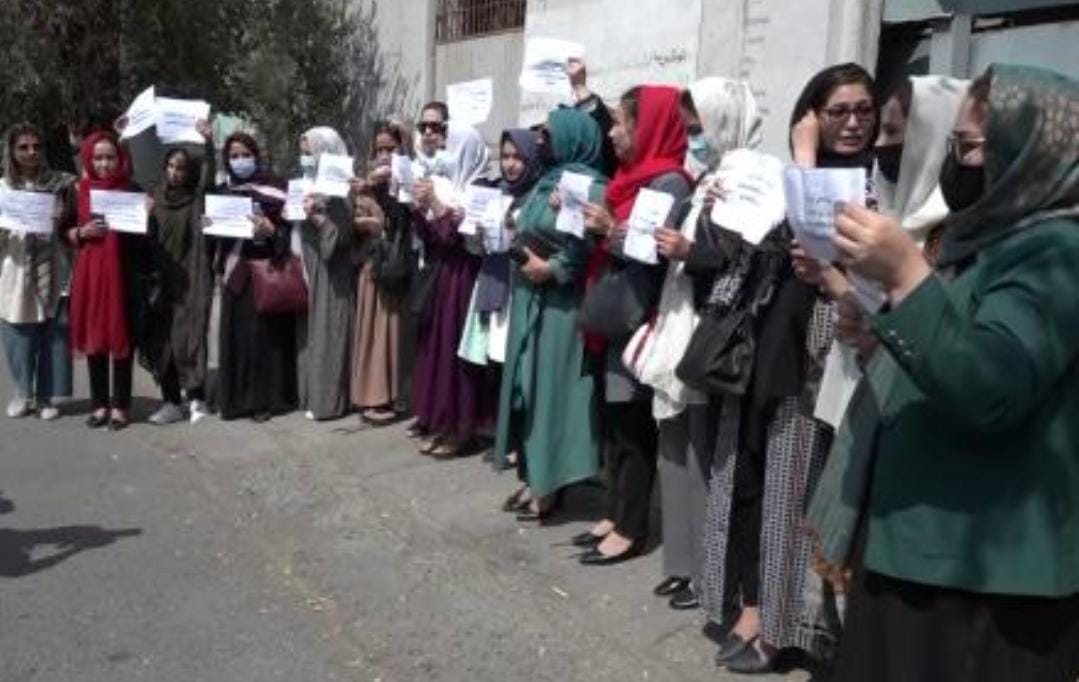 After the first 100 days of Islamic State rule in Afghanistan, international human rights organizations and institutions continue to report widespread violations of human and women’s rights. This year, Afghanistan was removed from the list of countries seen as “backward democracies” and included in the list of authoritarian governments.
“The Taliban do not respect women’s rights, and during this period many of them have been marginalized and in many places they are not allowed to move without a male family member present,” said Michelle Bachelet, UN High Commissioner for Human Rights.

“When girls can’t study in a country, women can’t work, and other citizens can’t work in a safe environment, is that a government?” asks Roya Dadras, a former spokeswoman for the Ministry of Women’s Affairs.
“The Ministry of Women’s Affairs is the identity of women in Afghanistan. We are against changing this ministry,” said a woman who protested its closure.
“The Islamic Emirate of Afghanistan has worked to provide excellent facilities for women and a good working environment,” said Enamullah Semanghani, Deputy Spokesperson of the Islamic Emirate.

“It is very important for girls to continue their education,” said Nizar Muhammad Irfan, a spokesman for the Ministry of Education. “We are working on a plan that, once completed, will prepare the right environment for girls to study in the country,” she continued, in what appeared to be more of an advertising claim than a tangible and sincere commitment.
According to UN data, as of August 2021, 27% of the members of Parliament and a fifth of the employees of the previous government were women, and millions of girls were attending school; With the regime change, not only were most women prevented from continuing to work in government institutions, the fate of high school girls also remained unclear.

“There is a lot of talk about Afghan women, but no one is listening to us,” said Fouzia Kofi, leader of the Afghan Transformation Wave party.
Closure of the Afghan Independent Human Rights Commission (AIHRC), failure of public academics to continue their studies, restrictions on women’s activities, military repression of civilian protests, threats of activists, violation of rights of ethnic minorities, lack of inclusive government, civilian casualties are open issues to worry.
At the forefront of the restrictions, the Taliban directives issued today to Afghan television channels have reached: They include a ban on broadcasting and filming films deemed contrary to Sharia principles and Afghan values. Filming of men exposing the private parts of their bodies has also been banned, as have comedies and entertainment shows that do not respect religion or are considered offensive to Afghans. The Taliban insisted that films promoting foreign cultural values ​​should not be shown. Afghan TV channels mostly show foreign productions with many actresses.

A member of an organization representing journalists in Afghanistan, Hojjatullah Mojadidi, told the BBC that some of the rules are not enforceable and, if strictly enforced, could force many broadcasters to close.
We will distribute the aid in two periods. “First we distribute food and now we distribute money,” said Daoud Ghaznavi, a WFP field observer. The United Nations Population Fund (UNFPA) distributed cash assistance to needy families in Kabul, in agreement with the United States Agency for International Development.
Several international organizations spoke about the humanitarian crisis in Afghanistan, saying that the number of people in need of aid will rise significantly during the winter season.
“I ask donors to help hospitals, pay salaries, increase their donations and continue until we come out of poverty,” said Bibi Anis, one of the beneficiaries.
“I urge them to increase the volume of aid in the future, as this will allow us to buy at least some fuel to warm our families in the coming cold season,” added Safiullah Khan, one of the beneficiaries.